"I AM WOMAN! I AM NOTTTTT PREGNANT! IT WAS THE TEQUILA."

Farhan Akhtar’s wife, Shibani Dandekar quashes rumours of her being pregnant by posting a video of herself in a strapless bikini top.

Online users began speculating that the diva is expecting after she went on to share some pictures with her hubby.

A bloaty stomach came to the attention of the Netizens, spreading pregnancy rumours.

As a result, Shibani Dandekar had her own reaction, deciding to put any speculation to bed.

On March 2, 2022, Shibani went on Instagram Story to dismiss the gossip, sharing a self-shot video, flaunting herself in a strapless grey bikini-bra top with black shorts.

The video also shows Shibani having a toned physique, reflecting her washboard abs. In the video, she had a bun-tied hairstyle.

She presents different poses in the video, with the track, ‘I Am Woman by Emmy Meli’ playing in the background,

Within the video, she had text form in capitals, so that all could take notice. She wrote:

“I AM WOMAN! I AM NOTTTTT PREGNANT! IT WAS THE TEQUILA.” 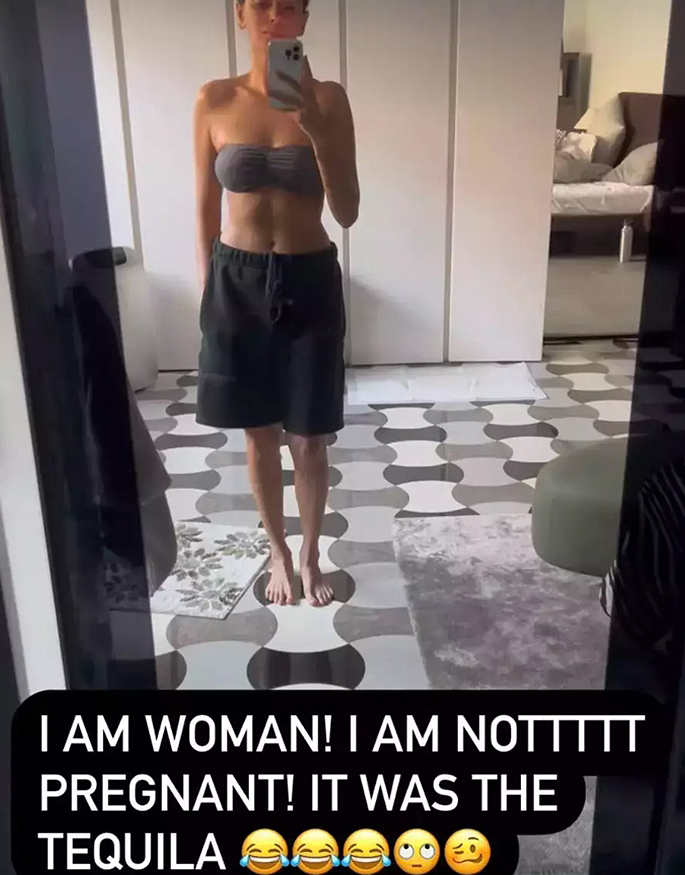 It’s quite evident from the text that her message was very loud and clear for everyone to understand. It was like she finally had to break her silence by blaming it all on the tequila.

The video in many ways has fun elements to it as well.

In a separate Instagram post, Shibani wore similar sexy attire, but this time showing off her new tattoo. Shibani, interestingly, has her arm inked, with the date of her wedding.

Shibani Dandekar and Farhan Akhtar tied the knot in a simple yet intimate ceremony on Saturday, February 19, 2022.

Farhan’s Khandala farmhouse was the venue for this private wedding event. Many names from the Bollywood fraternity were in attendance for the couples’ special day.

His sister Zoya Akhtar was there for her brother on this memorable occasion.

In addition, Hrithik Roshan and father Rakesh Roshan made an appearance. Rhea Chakraborty and her brother Showick Chakraborty also attended the wedding.

Farhan was looking very dashing in his black pantsuit, with Shibani opting for a stunning red tight fit gown with an attractive crimson veil.

Meanwhile, after finally reacting to the pregnancy rumours, Shibani Dandekar will be hoping to enjoy marital life, minus any further speculations.