King Khan set out to make a superhero film that would appeal to younger audiences and he did just that with Ra.One. A full on special effects and action film taking Bollywood to the next level of film making. Audiences have appreciated his efforts by making it a box-office hit and we give you an exclusive from his visit to London at the Western Union event for Ra.One.

Ra.One, Shahrukh Khan’s biggest Bollywood movie to date, produced by Red Chillies Entertainments in association with Winford Productions released across theatres worldwide on 26th October 2011, set a new record at the Indian box office by earning a gross of Rs. 170 crore worldwide in the opening weekend during the first five days of its release.

The weekend gross collection of Rs. 137.25 crore (net Rs. 96 crore) in India and Rs. 32.75 crore overseas has made it a record breaking movie. It is dubbed as SRK’s most ambitious project to date directed by Anubhav Sinha starring Shahrukh himself as G.One, the sueprhero along with Arjun Rampal as Ra.One, the baddie, and Kareena Kapoor as the heroine.

The visual effects and state of the art production techniques of the film have set a new standard in Bollywood films making, on par with Hollywood in many respects. Combined with a hugely popular soundtrack produced by Vishal & Shekhar and featuring Grammy award nominee Akon on the tracks Chamak Challo and Criminal have made Ra.One a blockbuster of 2011.

SRK has been busy tweeting on Twitter about Ra.One: “A big up to all who r making my dream come alive…and just a line from an old film..picture abhi baaki hai mere dost…love u all.”

Shahrukh Khan has gone to the next level with marketing and promotion for the film, seeking out new ways to promote this creative venture of his like no Bollywood film before. Including major sponsorships, brand associations and even a Sony PlayStation game based on the film. One of the biggest promotions was the collaboration with Western Union, the money transfer company, where everyone supporting and helping people by transferring money to loved ones and family is hailed as a superhero.

DESIblitz.com were present at the exclusive promotional event for Ra.One and Western Union in London on 25th October 2011, the day of the Ra.One premier in London. Watch the video highlights of this special event featuring Shahrukh Khan talking about Ra.One and the synergy with Western Union.

SRK received a very warm reception at the event. After the speeches, the atmospheric excitement left fans out of control who wanted to be the first to get their photos with him. Eager fans jumping the queue left King Khan stunned and a little exhausted, especially when he was already feeling under the weather. After all, he did want to save some of his energy for the big premiere in the evening. 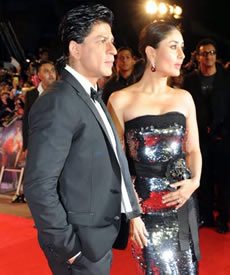 The UK Ra.One premiere was held at the Cineworld O2, where the cast and crew were letting out high energy and were buzzing with excitement to meet their fans. The red carpet dazzled with the stars of the show including SRK who was suited and booted in Dolce & Gabbana; Kareena, who blew everyone away in a beautiful Dolce & Gabbana off the shoulder sequinned gown and the stunning wife of Shahrukh Khan, Gauri Khan, the producer of the film, who was also very excited about celebrating her 20th wedding anniversary on the day.

The concept of the film is to show how good can win over evil using the story of a geeky video game developer, Shekhar Subramaniam (played by SRK) who wants impress his son, Prateek Subramaniam (Lucifer) by making a game where the villain, Ra.One (an acronym for ‘Raavan’ and played by Arjun Rampal) does not lose but the game gets out of control with Ra.One entering the real world seeking the son and subsequently being fought off by G.One (acronym for ‘Jeevan’ and also played by Shahrukh Khan).

The effects are of a tremendous nature and quality for a Bollywood film with excellent fighting and action scenes and do keep audiences captivated by what is going to happen next. The glamour to the screen is added by Kareena Kapoor who looks amazing throughout playing the role of the mother of Lucifer and wife of Shekar, Sonia Subramaniam.

Commenting on the film Shahrukh Khan told the Times of India: “It is a new genre film. It is meant for people under-30. And I am not decrying anyone. I am above 30 but I love these kind of films.”

The film is still scheduled for release in the first quarter of 2012 across several territories including Russia, Spain, Italy, Greece,South Korea, Hong Kong, Taiwan, Palestine, Lebanon, Jordan, Syria and Brazil.

Shahrukh Khan has definitely proved that Bollywood is capable of making a superhero movie and also making its mark at the box office but there is no doubt that SRK is a superhero for his fans no matter what film he makes.

What did you think of Ra.One?

Sonia has a passion for presenting and journalistic challenges. She has a special interest in music and Bollywood dancing. She loves the motto 'When you've got something to prove, there's nothing greater than a challenge.'
Ra.One set to be Diwali firecracker
Baby Girl for Aishwarya and Abhishek