After backlash from users, the South Asian dating website, Shaadi.com has removed its skin tone filter. Let’s find out more.

“Now is the time to re-evaluate what we consider beautiful."

Following mounting pressure from its users, the dating and matrimonial website Shaadi.com has removed its skin tone feature.

Founded in 1997, Shaadi.com specialises in matchmaking and states that they “have touched more than 35 million lives.”

The word “shaadi” means “marriage” in Hindi. The website is the largest matrimonial dating site that caters to the Desi diaspora across the world, aiding the traditional matchmaker role.

Since its creation, the website has asked users to specify their skin tone which has been intrinsically linked to Asia’s colourism and racism problem.

When users joined the website, they were asked to select the tone of their skin to indicate how light or dark they are. Options included “dark”, “wheatish” and “fair” amongst others.

Users (or parents seeking suitable partners for their children) could search for potential partners by narrowing down people by the skin tone they selected as desirable.

Shaadi.com maintains that searches would show all skin tones and that this filter did not work.

If the filter did not work or served no purpose, it raises the question: why it was included initially?

The global backlash against this filter began with Shaadi.com user Meghan Nagpal.

The Toronto-based user decided to go on the website which coincided with the protests following the murder of George Floyd.

In light of Floyd’s death, Nagpal was shocked that the website asked her to indicate the colour of her skin. Given the resurgence of the Black Lives Matter movement in the media, she tweeted the website.

“@ShaadiDotCom have you thought that you should maybe remove the skin colour option on your profiles? Colourism has proven to be dangerous #SouthAsians4BlackLives #endcolorism #BlackLivesMatter”.

@ShaadiDotCom have you thought that you should maybe remove the skin color option on your profiles? Colorism has proven to be dangerous #SouthAsians4BlackLives #endcolorism #BlackLivesMattter

This garnered a lot of attention and prompted a larger discussion about the filter’s relevance in society.

Shaadi.com claims that the filter “serves no purpose” and that it was a “blind spot” they had missed. However, this sentiment was only publicly delivered once outrage on social media increased.

Prior to the website’s statement, Nagpal emailed the company about its filter and was told:

“As you know this is a Matrimonial site and most parents do require this as an option so its visible on the sight.”

This email contradicts their later claim “one cannot filter profiles using this” because they “do not collect or capture this information on [their] platform.”

They even state that “this search filter has no implications on matchmaking.”

Why is it then that they emailed Nagpal that a skin tone filter is visible on their platform because parents require it?

She decided to take action to change this display of colourism. 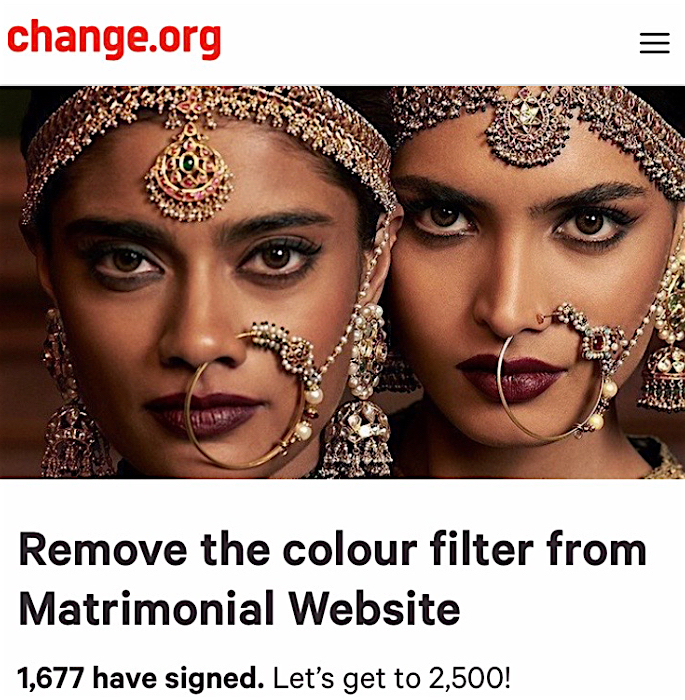 Lakhani set up a Change.org petition to “Remove the colour filter from Matrimonial Website.”

An excerpt from the petition reads:

“We demand that Shaadi.com must permanently remove its skin colour filter to prevent users from selectively searching for matches based on their preferred skin colour.

“Now is the time to re-evaluate what we consider beautiful.

“People with darker skin experience greater prejudice, violence, bullying, social sanctions, and all kinds of skin-lightening treatments are recommended to them under the guise of ‘making them desirable’.”

Colourism has significant consequences in our community, especially for women.

The obsession with fair skin is notorious within South Asian and Desi communities.

The belief that fair skin makes a better bride or husband is still rife. It is often a determining factor in whether an individual is accepted or not.

Over the decades, Asian mentality and actions have held whiteness in high regard. Light skin is used as a marker of attractiveness, wealth and being from a higher caste.

The skin tone filter on Shaadi.com perpetuates anti-blackness and reinforces what society considers to be beautiful.

Consequences can be extremely severe, leading to social exclusion and physical harm.

Many people flocked to social media to question why Shaadi.com has the option to put a filter on your skin tone – effectively changing the colour and lightening your skin tone. 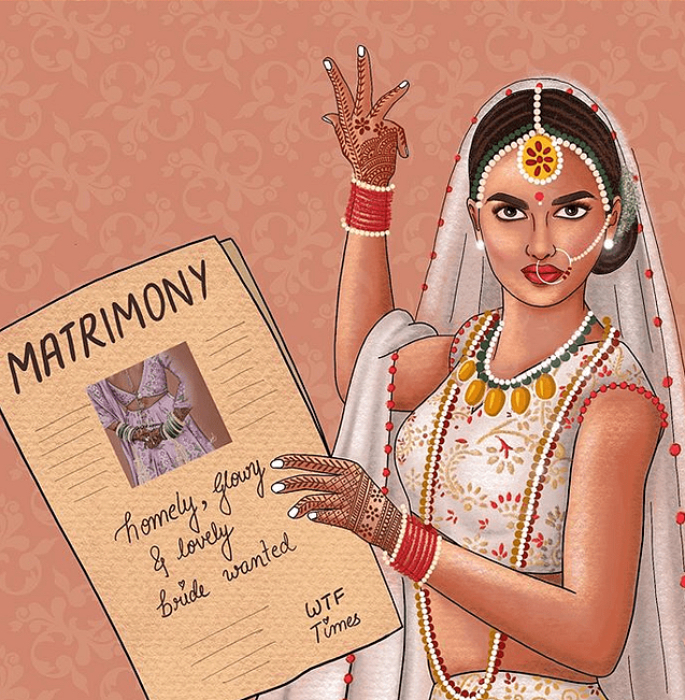 She demanded that the website provide valid reasons for encouraging users to fake the colour of their skin.

Replying to Patel, Shaadi.com said that they “do not ask any of our members for their skin tone or colour and we do not discriminate based on skin colour.”

People were outraged by this hypocrisy.

Telling Patel they do not discriminate or ask for skin tone whilst informing Nagpal that skin tone options were necessary because of parental demand is a complete paradox.

Many people labelled the skin tone controversy as “disrespectful” and “disgusting”.

Does the company not hold a social responsibility?

Shaadi.com’s statements lacked transparency. It was only after public embarrassment and scandal that the company finally removed the skin tone aspect.

This step, no matter how small, shows that promoting equality within the South Asian community on a global scale is moving in a positive direction.

Halley Chand, a psychology student, says that she had heard countless South Asian women say “she is so fair and beautiful.” It is also believed this is an “unconscious bias that companies need to be more responsible about”.

It is argued that companies like Shaadi.com, who have an international reach should not augment this anti-blackness and prejudice.

Simran* says that she was rejected multiple times on the website for her skin tone. She says:

“I have a bronzed skin tone and when I saw the skin tone question I had no idea what to put. I ended up selecting ‘wheat-ish’ but I still don’t know what that means.

“My husband’s family were so against our marriage because he is much fairer than I am. I have always experienced this kind of hate. It’s nothing new”.

She, like many others, have been discriminated against because of the darkness of their skin.

The change that Shaadi.com has made is progress but their initial disregard for changing the filter shows their true bias towards skin tone.

Much more is yet to be done in shifting people’s attitudes and decreasing the judgements against skin tone in South Asian cultures.

*name has been changed for anonymity