Sajal Aly has dropped Ahad Mir from her official Instagram name. This has fuelled rumours about her parting ways with her husband.

"This is heartbreaking, More power to you Sajal."

Actress Sajal Aly has removed Ahad Mir from her name on Instagram, fuelling divorce or separation rumours about her marital life.

The popular TV and film actress reverted to her maiden name, Sajal Aly, hinting she and Ahad Raza Mir may have parted ways.

The possible divorce has come as a shock for fans, especially with them hoping that the two were still together.

Sajal Aly and Raza Mir who had tied the knot in 2020 were regarded as one of the most admired couples.  As per reports, Ahad had  proposed to her on the sets of HUM TV drama Aangan (2018)

One emotional fan wrote: “I don’t know whyyy but I want to cry.”

Another fan posted: This is heartbreaking, More power to you Sajal.”

One fan vented her anger on Ahad Raza Mir, writing:

“This is heartbreaking. I hate Ahad now.”

There was a range of other comments reflecting on the possible “toxic marriage” of the two. Some fans felt it was probably for the best, with others suggesting not to speculate still. 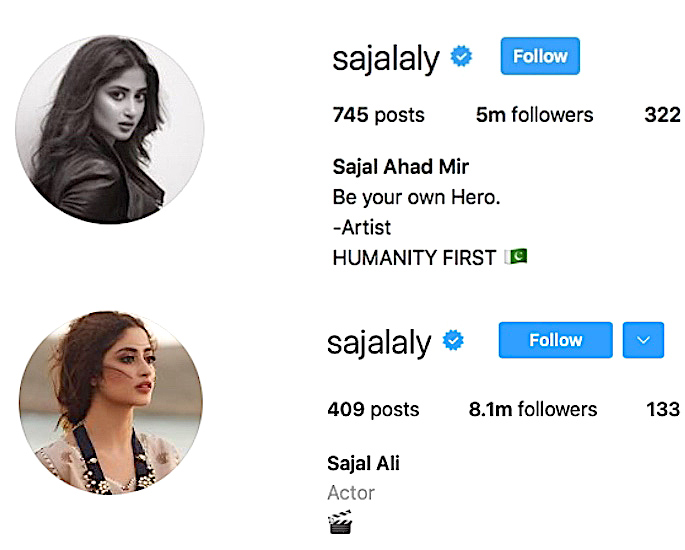 Sajal Aly dropped her husband Ahad Raza Mir’s name from her social media amid speculation that the couple may have called it quits.

Speculation about the two quitting their relationship have been going on for some time. The rumour mill began Ahad failed to show at the wedding of Saboor Aly. Saboor is the sister of Sajal.

Many fans thought this was strange, considering Ahad was with his family in Dubai attending other events

Adding further fuel to the fire, Ahad also did not attend the promotion for Khel Khel Mein (2021), featuring Sajal Aly.

At the time, Sajal came to her hubby’s defence telling the media that his absence was due to his work commitments

“Ahad is at work, he is not in Pakistan so that is why he is not here.”

Despite the actress, dropping ‘Ahad Mir; from her Instagram, there has been no official reason for it coming from Sajal.

Ahad also has remained quiet on the matter. Hopefully, one of the two will open up and clear everything. After all the two have their respective careers to think about as well.

Their personal life has become somewhat of a distraction on a professional level.

Faisal has creative experience in the fusion of media and communication and research which increase awareness of global issues in post-conflict, emerging and democratic societies. His life motto is: "persevere, for success is near..."
Priyanka Chopra set to Host Pre-Oscars 2022 Event
Jayeshbhai Jordaar to be made into a Comic Book Series