Here’s a look back at Sajal Aly and Ahad Raza Mir’s relationship, from their onscreen chemistry to private engagement to divorce rumours.

"We should take a break from it"

All relationships have their ups and downs but Sajal Aly and Ahad Raza Mir’s relationship timeline is especially fascinating.

To the delight of fans, Sajal and Ahad’s onscreen romance in Yakeen Ka Safar blossomed into a relationship behind cameras.

Since then, the duo, who are lovingly referred to as ‘Sahad’ by fans, has been seen as one of Pakistan’s favourite power couples.

After the drama, they became inseparable. Their chemistry sizzled and set screens alight.

One drama and advertisement after another, Sajal and Ahad dominated the Pakistani entertainment space.

Whilst they both refrained from excessively sharing their relationship on social media, their fans couldn’t get enough of the two.

So, when Sajal removed her husband’s surname from her Instagram bio and Ahad failed to make an appearance at family functions, the news instantly sent shockwaves through Lollywood.

In the years following their marriage, many new details about the status of their relationship have come to light. But we’ll get to that.

Here, take a look back at Sajal and Ahad’s relationship.

How did they meet? 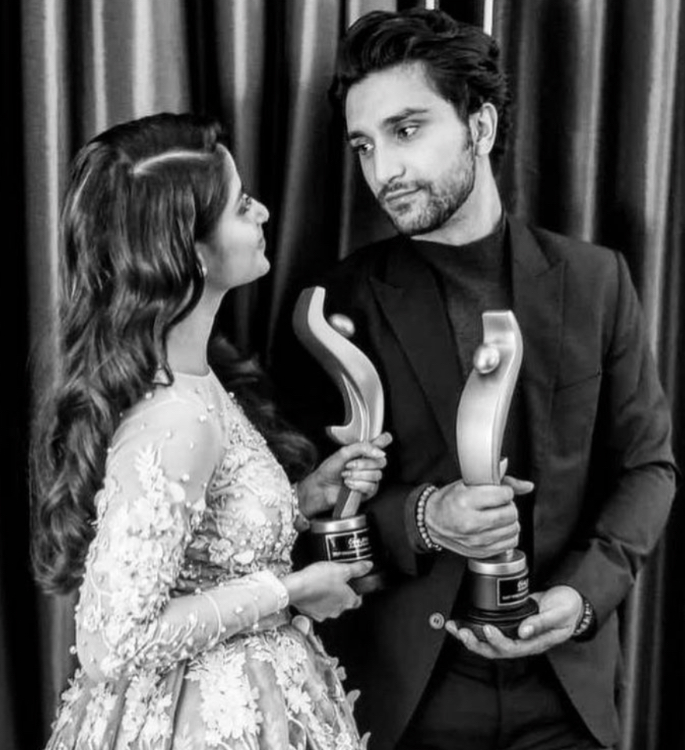 While the hit TV series Yakeen Ka Safar was showing on screens, rumours about the duo’s romance began to circulate.

Fans adored Sajal and Ahad in their roles as Zubia and Asfandyar and secretly wished for them to marry.

Yakeen Ka Safar was one of the highest-rated programs in Pakistan when it was released in 2017.

They were also seen together at other celebrity weddings during that time.

After Yakeen Ka Safar, Sajal and Ahad won the Best On-Screen Couple trophy at the 2018 awards which made the fans even more suspicious.

Sajal Aly’s sister Saboor shared a post on Instagram congratulating the two on their win, however, she did not confirm their relationship.

She wrote: “This is just not an adorable picture for me; it is a reminder for me as to how two people can achieve greatness together.

“From the moment Sajal started working with Ahad in their first project I knew that these two will create a great chemistry on screen as Ahad was as hardworking as my sister and these awards are proof of that.” 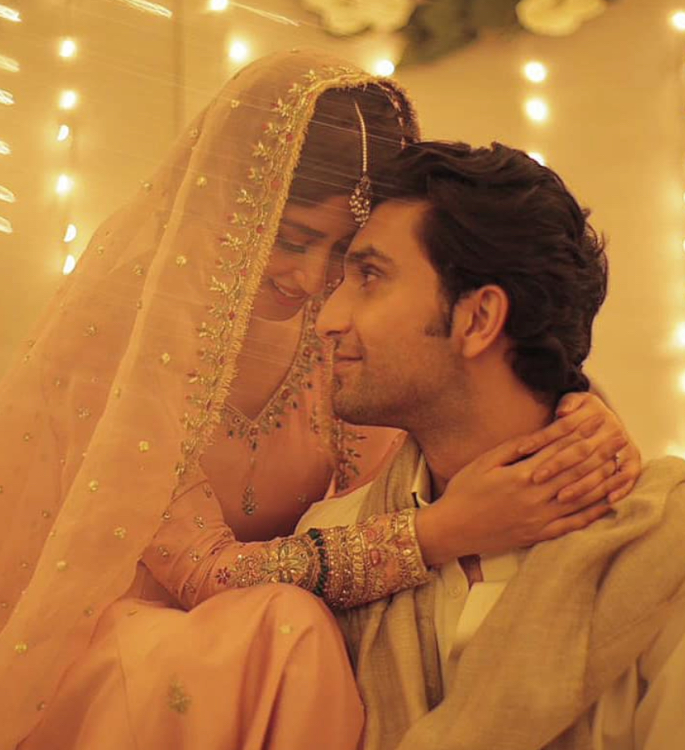 In June 2019, Sajal and Ahad made their relationship public and announced to the world that they had just gotten engaged.

“Today we are happy to announce that with the blessings of our families we are officially engaged.

“Our special day will be even more special with the love and prayers of our family, friends and fans.”

In 2020, Saboor revealed how Ahad had approached Sajal with a formal proposal through his family and talked to her father directly.

Sajal talked about their proposal in January 2022 and revealed that Ahad had asked for her hand in marriage on the sets of Aangan.

The actress said: “We had just got engaged when we started working in Aangan together. He had proposed to me and I had told him that he needed to reach out to my family.

“The very next day, I had fallen ill and Ahad’s mother had come to take care of me for three days. My father had been very surprised but my sister told him that Ahad’s family were thinking of marriage.

“Once I got better, Ahad’s parents came to Lahore, met my family and we got engaged.”

She added: “I later asked Ahad why he had been in such a hurry to get engaged.

“He told me that he had been afraid that, if he didn’t ask me to marry him, he would lose me, and I would marry someone else.” 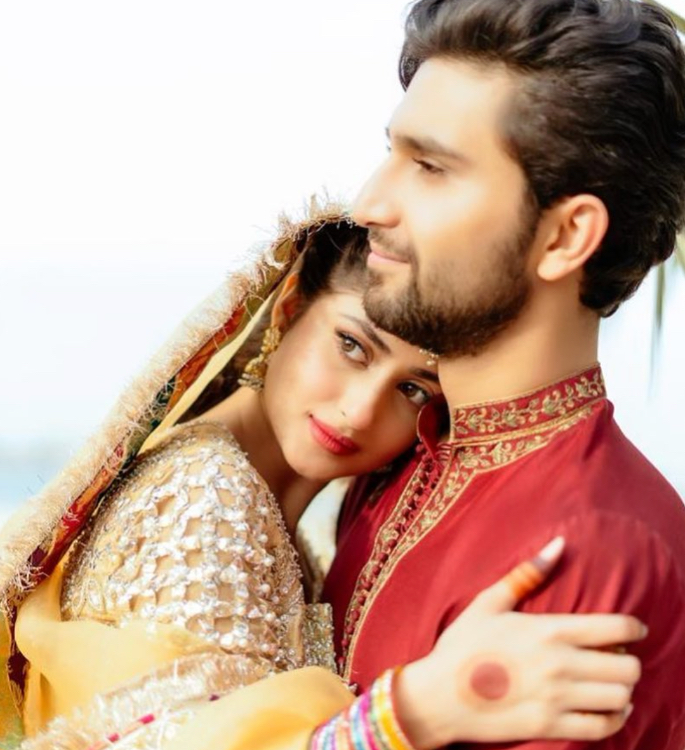 Sajal and Ahad exchanged vows in a destination wedding in Abu Dhabi on March 14, 2020.

Sajal and Ahad’s wedding festivities began a week before their wedding day.

On their wedding day, the couple went for a traditional and elegant look.

Loyal fans of the actress were quick to notice that Sajal Aly had recreated her late mother’s wedding look.

Shortly after tying the knot with Ahad, eagle-eyed fans noticed the actress had changed her name on Instagram to “Sajal Ahad Mir.”

Her Instagram following had also increased to five million followers after Sajal and Ahad confirmed the news of their wedding. 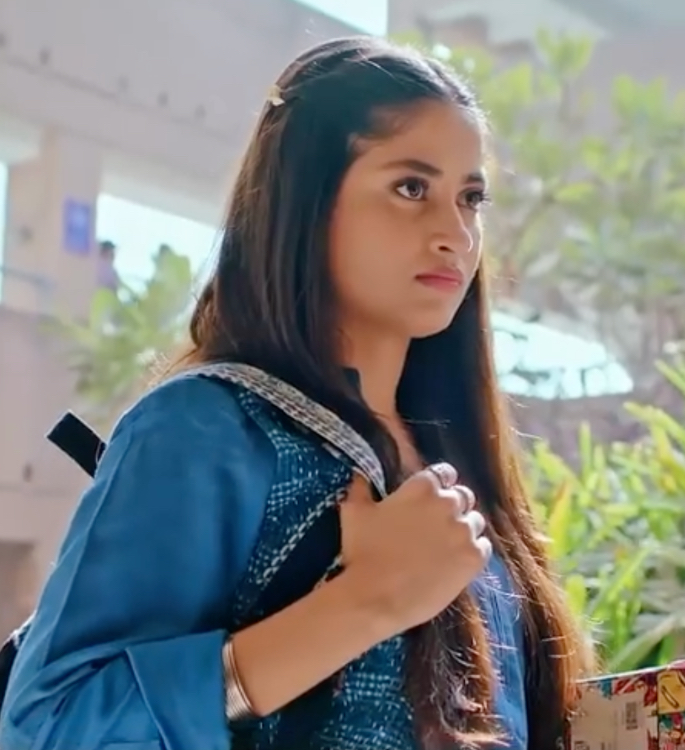 In November 2021, Sajal received praise for her performance in the coming-of-age drama film Khel Khel Mein.

Whilst promoting the film with her co-star Bilal Abbas Khan, rumours of the couple’s separation began to spread.

Sajal’s husband was nowhere to be seen during the promotions and failed to make an appearance at the film’s premiere.

Ahad’s family also did not attend the premiere.

During her promotional tour of Khel Khel Mein, Sajal Aly answered paparazzi who asked about her husband’s absence.

When asked why Ahad didn’t attend the premiere, Sajal said:

“Ahad is at work, he is not in Pakistan so that is why he is not here.”

However, fans were not convinced with the actress’ response as Ahad was spotted at a party in Karachi around the same time.

The actor was also absent from his sister-in-law’s wedding festivities.

Saboor Aly and Ali Ansari were joined by their family and friends for an intimate Mayun ceremony on January 5, 2022.

While Sajal was seen front and centre of the Mayun ceremony, Ahad was nowhere to be seen.

During this time, the actress also revealed that the couple had decided to take a break from joint projects.

Sajal said: “I thought that Dhoop Ki Deewar had a simple story and I would be working with a great team.

“But Ahad and I did decide that we had been acting together far too frequently and that we should take a break from it, unless, of course, the sort of story comes along that we can’t resist.”

Where are they now? 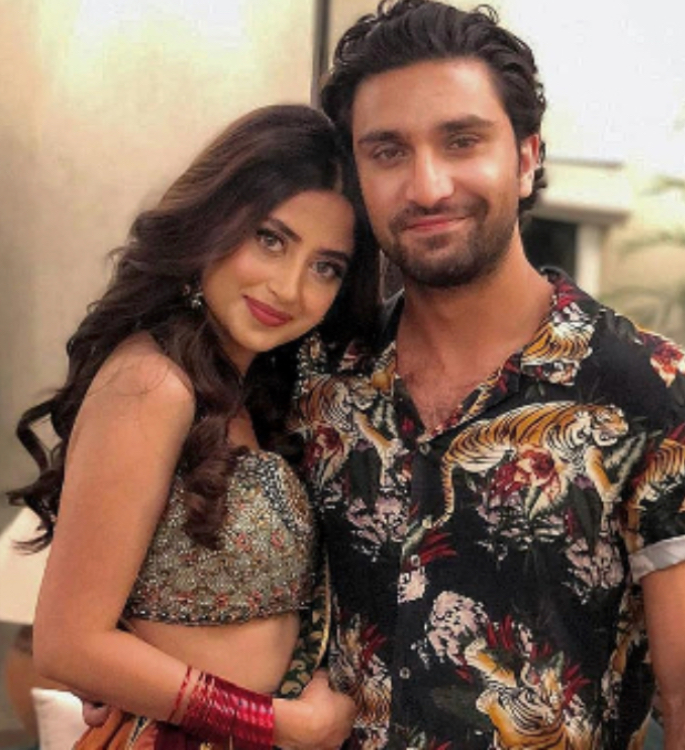 The star couple has long been rumoured to have parted ways after getting married in 2020.

Despite Sajal and Ahad’s efforts to dispel separation rumours, netizens are not entirely convinced about their status.

Adding fuel to the fire, neither Sajal nor Ahad acknowledged their second wedding anniversary on social media.

In 2021, Ahad extended gratitude to his fans for their love on his first wedding anniversary with Sajal.

“I know it’s a little late, but thank you to everyone, especially our fans who made our first anniversary so special.

In the latest development surrounding the couple, Sajal has removed Ahad Mir from her name on Instagram, fuelling separation rumours about her marital life.

There was a range of other comments reflecting on the possible “toxic marriage” of the two.

Both Sajal and Ahad have remained quiet on the matter.

Only time will tell if one of the two will open up and provide their fans with an update.

In other news, Ahad Raza Mir recently announced that he will be starring in Netflix’s live-action remake of Resident Evil.

While the details of his character are currently being kept under wraps, Ahad took to Instagram to share a poster of the series, captioning it with:

The reboot will build on the hit survival video game franchise, which also includes a series of Hollywood films starring Mila Jovovich.

Ravinder is a Journalism BA graduate. She has a strong passion for all things fashion, beauty, and lifestyle. She also likes to watch films, read books and travel.
Court summons Salman Khan for Misbehaving with Reporter
15 Best Wine Scenes to Watch in Bollywood Films