Political party UKIP have unveiled their candidate for Hull North as British Indian, Sergi Singh. Sergi will stand against other parties for a seat in the May 2015 general elections.

"The idea that UKIP is a racist party is complete nonsense."

A local shopkeeper from Yorkshire, Sergi Singh, has been unveiled as the new UKIP candidate for Hull North.

The Indian Sikh owner of ‘Jackson Wines’ in East Hull is a prominent member of the UKIP party running as their Yorkshire and North Lincolnshire branch vice-president.

“I am not a career politician. I am just an ordinary person, but I don’t think the people of North Hull are being listened to and I think they feel it is time for a change,” Sergi explains. 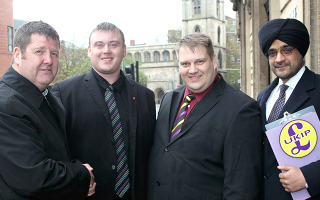 Sergi is one of the few non-White members of UKIP – a party notoriously known for its racist views towards non-whites.

But Sergi admits that he agrees with many of the party’s policies and that UKIP is not an elitist organisation:

“The idea that UKIP is a racist party is complete nonsense. I was voted to stand for MP in North Hull by the local UKIP branch and I have never had any negative experiences with anyone in the party,” Singh said.

Singh insists that the party is open to people of all ethnicities and races. All of whom share the same political ideologies, and are a more realistic mouthpiece for the working classes:

“There are all sorts of different people in the party from different backgrounds, but everyone gets along very well.

“We are like a chocolate bar, you have the wafer bit, the caramel bit and the chocolate bit. It’s a mix of all these different things and it tastes really good.”

“UKIP is the party of the working class. Most of the MPs sitting in parliament don’t know what it is like to work for a living or how to take the bus,” Sergi added, defending his party.

Sergi will be going head to head with Labour Diana Johnson who has held the Hull North seat since 2005. In particular, he is keen to voice the party’s opinions on immigration:

“I want to offer the people of Hull North a referendum on Europe and we are the only party committed to doing that.” 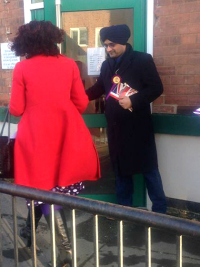 Speaking for Labour, Diana said: “Now that Mr Singh has been selected, I look forward to him explaining UKIP’s opposition to wind energy that’s bringing the Siemens jobs to Hull, instead of them going abroad.

“Perhaps Mr Singh will also tell Hull North voters why UKIP MPs sided with the Tories and Lib Dems to bring in the “bedroom tax” and why UKIP helped the Coalition block Labour bids to cut energy bills and to have tougher enforcement of the minimum wage.

“In the end, Hull North voters will have to choose between a Labour MP fighting for Hull North and the Lib Dems and UKIP, which are only fighting to be the next Coalition partners for the Tories.”

Sergi Singh is not the only Indian to have joined UKIP. Coventry’s Harjinder Singh Sehmi made the switch from Labour to UKIP, in October 2014.

Originally, from India, but now a British citizen, 60-year-old Sehmi admitted that he changed parties because he did not agree with the number of migrants coming to settle in the UK:

“Border control is a very important issue at the moment. There are too many guests from Europe and we could be risking overcrowding. We need to stop so many people coming and control the borders more strictly.

“I am a British citizen and very proud to be British. In the 37 years I have been here I have worked for all in the community to further this country in one way or another. 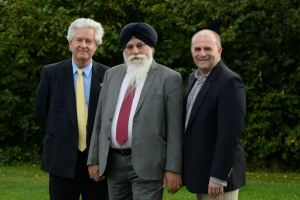 “Some people say UKIP is a racist party but I don’t see how. I have joined, how can they be racist? They are accepting of all British people and I am pleased with that,” Sehmi added.

The rise in number of non-whites to UKIP may come as a surprise for many, but Mark Taylor, Chair of Coventry UKIP, insists that it is not unusual:

“The membership I see is very mixed. It’s been very interesting to see what has happened in the last two years with people coming to UKIP from all backgrounds.

“Some maybe coming from immigrant families who themselves want to control immigration. People simply want some process to be sorted to put in a degree of control.”

Notably, Harjinder is also heavily involved in local organisations and is the general secretary of Ramgarhia Sikh Temple in Foleshill.

Sergi meanwhile was chosen to be the ‘regional face’ of Strepsils Handy Tubes in 2009. He also hosted a Royal Wedding street party in honour of Prince William and Kate Middleton in 2011 outside his store.

His latest policy idea is to directly help the public through a ‘battle bus’ campaign.

Aside from Labour’s Diana Johnson, Sergi will stand against Liberal Democrat Mike Ross and Conservative Dehenna Davison, for the Hull North seat.

With their clear views on the UK’s current immigration laws, it will be interesting to see how Sergi, Harjinder and their UKIP alliance fare in the upcoming general election on May 7, 2015.