A jury heard that Blackburn resident Sajed Choudry died after he was attacked with a machete amidst an ongoing family feud.

"That was the last blow that Sajed Choudry received."

Sajed Choudry, aged 42, from Blackburn, was murdered with a machete amidst an ongoing family feud.

Preston Crown Court heard that the father-of-four was stuck with a machete to the side of his head.

He died over two weeks later from his injuries that he suffered in an altercation near his home on November 27, 2018.

For several months, there had been issues between the Choudry and Ali families, who lived nearby.

The jury heard that Sadaqat Ali, aged 36, was arrested after he hit Mr Choudry’s 24-year-old son Ahsan over the head with a bar after a chance meeting on November 24.

While in custody, Sadaqat’s wife saw another son of Mr Choudry, Mohsan, aged 20, approach her husband’s car and slash one of the tyres, which led to his arrest.

The prosecutor George Cole QC took the jury through CCTV footage which he claims captured the murder of Mr Choudry on Rhyl Avenue.

He explained that the Crown’s case was that five defendants met up on Rhyl Avenue on November 27 armed with pieces of wood, an axe and a machete-type weapon. 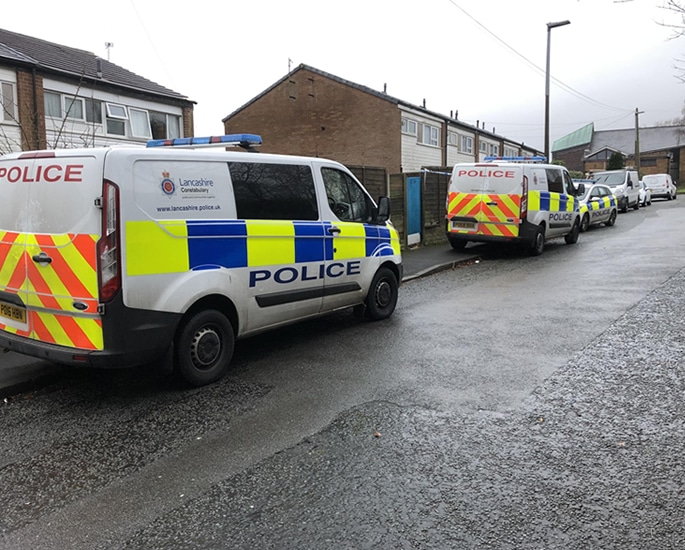 The defendants were Sadaqat Ali and his brother Rafaqat, aged 38, their father-in-law Razal Ilahi, aged 62, another man, Syed Ali Akbar, aged 45, and a youth who cannot be named for legal reasons.

Mr Cole also said that Mr Choudry was seen in the footage with a baseball bat. Ahsan had been armed with a cricket bat.

He stated that Sadaqat was spotted holding the machete and at one point struck Ahsan. This caused a huge cut to his left hand which he put up to defend himself.

Ahsan then used the bat to hit Sadaqat in the face before Rafaqat struck Ahsan on the head with a stick.

Mr Cole stated: “At one stage you will see a clear backhand swipe into the side of the head of Sajed Choudry which caused him to go to the floor.

“That was the last blow that Sajed Choudry received.”

The court was told that Sadaqat then chased Ahsan into his front garden before striking the door with the machete and then turning away.

It was revealed that the machete has not been recovered.

When paramedics arrived, the prosecution alleged that Sadaqat pretended to be unconscious.

It was also claimed that Saira Ali and Asma Ali, the wives of Sadaqat and Rafaqat, deliberately turned off the CCTV system covering the outside of Sadaqat’s home before the violence began.

The prosecutor said that a pathologist would explain the extent of Sajed’s injuries later in the case.

Mr Cole said the Crown anticipated that both Sadaqat and Rafaqat will say that their actions were in self-defence and did not intend to kill or inflict serious harm.

He added that the other three suspects were expected to say they did not participate in any unlawful violence.

Mr Cole said that Saira Ali, aged 35, and Asma Ali, aged 34, would claim the CCTV system was prone to fault and it was a coincidence it stopped working at that moment.

The five suspects all deny murder and attempted murder. Saira and Asma deny attempting to pervert the course of justice.

The Lancashire Telegraph reported that the trial is expected to last eight weeks and is ongoing.

Dhiren is a journalism graduate with a passion for gaming, watching films and sports. He also enjoys cooking from time to time. His motto is to “Live life one day at a time.”
Indian Woman with Road Rage beats Driver with Iron Rod
Amir Khan’s Parents blast Granddaughter’s £75k Birthday Party