The first look poster of Ranbir Kapoor’s film Animal is finally released and it’s got fans buzzing with intrigue.

"I will get him for this one."

The first look poster of Animal features Ranbir wearing a blood-soaked white shirt, smoking a cigarette, and staring at someone, while carrying a bloody axe in between his arm.

The actor’s rugged look in the poster hints that the upcoming film will feature Ranbir in a never-seen-before avatar.

Earlier, the makers had announced that the first look of Animal will be unveiled on December 31, 2022, at midnight.

Rashmika Mandanna, who will be seen opposite Ranbir in the film, shared the poster of Animal.

Sharing the picture, Rashmika wrote: “Animal first look is here. So, so excited for you all to see this look.”

Anil Kapoor also shared the poster on his Instagram handle and captioned it: “#RanbirKapoor releasing the #Animal within, soon! This is such a killer poster love it.”

Soon after the first look was shared by the director on his Instagram handle, it took the internet by storm.

One fan wrote in the comments section: “Dayumm”.

Another wrote: “This is insane.”

Another fan commented: “Dead,” while another added: “Kadak buddy.” 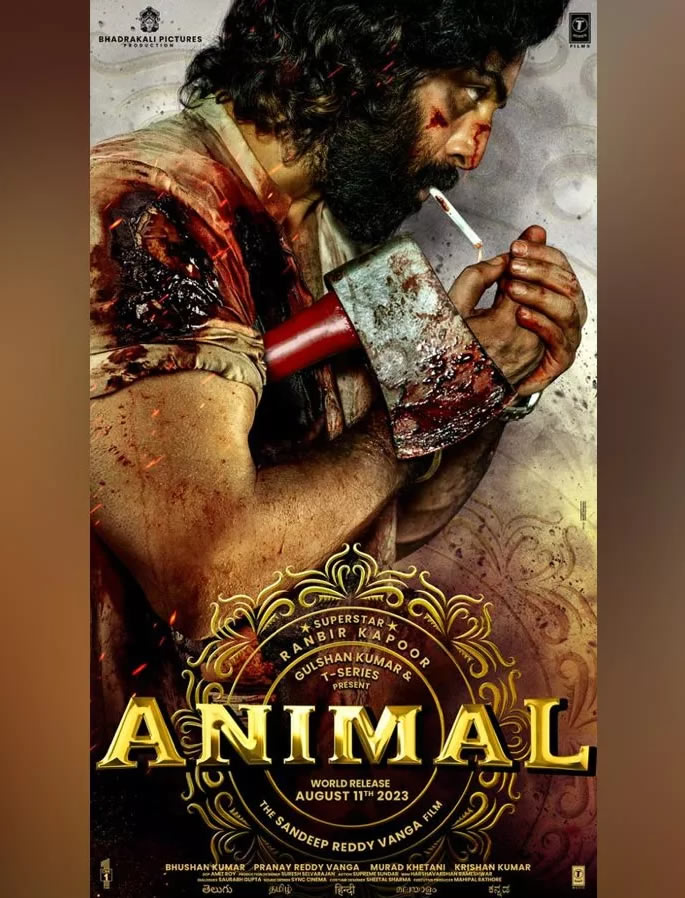 The filming of Animal of took place in Himachal Pradesh as well as actor Saif Ali Khan’s Pataudi Palace near Delhi.

Pictures from the sets were also shared online.

Meanwhile, it was reported in the early part of 2022 that Parineeti Chopra would play the lead female role in Animal, however, she walked out of the project.

Talking about working with Ranbir, Rashmika told Filmfare in June 2022:

“I was, of course, nervous when I met him first, but I think he’s so easygoing that five minutes into the look test, we were already very comfortable with each other.

“Thinking about it, it’s amazing how easy it’s been so far with Ranbir and Sandeep. And he’s the only one in the whole industry who calls me ‘ma’am’, and I do not like it.

“I will get him for this one.”

Aarthi is an International Development student and journalist. She likes to write, read books, watch movies, travel, and click pictures. Her motto is, “Be the change you wish to see in the world
When will the ‘Varisu’ Trailer be released?
The Legend of Maula Jatt ‘postponed indefinitely’ in India