Pakistan’s designer thanks PM for Help over Husband’s Arrest

Pakistani designer Maria Butt has thanked Prime Minister Imran Khan for helping her husband who was arrested for a Coronavirus case.

“I did not think someone would understand my pain.”

Pakistani designer Maria Butt, popularly known as Maria B has thanked the Prime Minister of Pakistan Imran Khan for intervening and saving her husband Tahir Saeed who was arrested.

Maria B uploaded a video on social media explaining how her house was raided by the police and her husband was arrested after testing positive for COVID-19 on Tuesday, 24 March 2020.

In the video, the designer appeals to PM Imran Khan to help resolve the matter. She said:

“This is my appeal to Prime Minister Imran Khan that my husband was raided by police at midnight and was taken away as if he was a criminal.”

Maria B continued to mention that the police referred to her as a “culprit”. She questioned:

“Just tell me why? Why did they call me (a) culprit? Why they raided at middle of the night when nobody was up there and took away my husband?”

Reportedly one of the servants working in their home tested positive for coronavirus pic.twitter.com/BXdO04XUQO

The Pakistani designer also confirmed that her husband tested positive for the Coronavirus.

However, in response, a spokesman for the Lahore Police explained why the raid and arrest were justifiable.

According to the spokesman, an employee of Tahir Saeed had the Coronavirus.

However, the family allowed him to travel to his village Vehari instead of being in self-isolation. He said:

“He conducted the COVID-19 test for his cook, Omer Farooq, from a private laboratory after his health deteriorated and the test came out positive.

“Instead of informing the concerned authorities, Saeed sent Farooq to his native city on a public bus.”

His journey meant he had to catch two buses which caused the risk of infected fellow passengers on the buses as well as his family.

Due to Saeed’s negligence, he was arrested in favour of the larger public interest.

In a second video posted online, Maria B has thanked the PM and the Pakistan Army for saving her husband. She said:

“I did not think someone would understand my pain.”

Saeed further added how the police unnecessarily forced their way into the couple’s house at 12.30am. He explained:

“The incident that happened yesterday was an outcome of pure panic and is plain harassment.”

He stated two dozen police officers stormed into their house during the night. Upon asking for his CNIC card number they arrested him on confirmation that he was the person they wanted.

Saeed also added that while taking him into custody, the police misbehaved with his wife, Maria B.

The couple highlighted that they are not complaining about their treatment by the police as “they were under no illusions of what the country’s police is like.”

They went on to explain how this incident transpired due to the miscommunication between government authorities.

Maria B and Saeed also explained how they ensured a safe passage for their cook to return home and he was to follow strict guidelines of self-quarantine. They said:

“What else were we do to? Servants are not slaves. We have children at home too.

“We took the best decision we could after the authorities failed to handle the situation and left us no choice by leaving us in the dark.”

The couple also showed Saeed’s test results which confirmed her tested negative for the Coronavirus as well as the entire family.

Maria B and Saeed further mentioned that the police officers were poorly equipped without the form of protection, rather they were in their usual uniform.

It was revealed that Farooq was also arrested and transferred into an isolation ward.

Watch the Video of Maria B and Saeed’s clarification 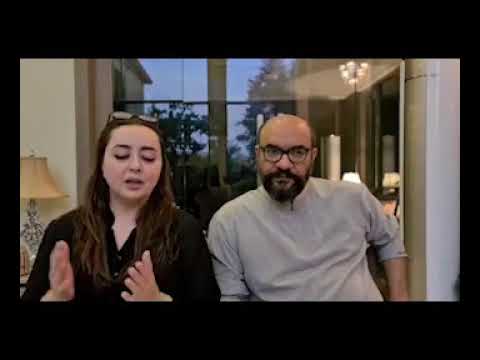 Ayesha is an English graduate with an aesthetic eye. Her fascination lies in sports, fashion and beauty. Also, she does not shy away from controversial subjects. Her motto is: “no two days are the same, that is what makes life worth living.”
How has the Coronavirus affected Indian Designers?
Best Loungewear Ideas to Wear during Lockdown