A Pakistani man has attracted attention after he married a Vietnamese woman, mainly due to the 41-year age gap between them.

when he continued speaking to her, she believed him.

A Pakistani man got married to a Vietnamese woman. They were wed in the province of Dong Nai.

However, their love story attracted attention on social media due to their age difference. Aziz ur Rehman is 24-years-old while his wife Nguyen Hoa is 65.

It was revealed that they got to know each other through social media.

After seeing her pictures on Facebook in 2018, Aziz became attracted to her. When they spoke online, he did not hesitate to tell her.

However, due to the age gap and the fact that she did not know anything about Aziz, she did not accept his love.

Neighbours believed that Aziz may have been targeting Nguyen for money, however, she revealed that she was not rich.

Nguyen was also sceptical about Aziz’s feelings as she did not know if he was being genuine. But when he continued speaking to her, she believed him.

When Aziz asked to visit her in Vietnam, she was surprised but welcomed it.

After arriving in Vietnam, the Pakistani man became more fascinated with his love interest as he liked her honest personality.

Aziz then decided to stay in Vietnam.

Following their two-year relationship, the couple decided to get married. They received support from their families and officially became a married couple. 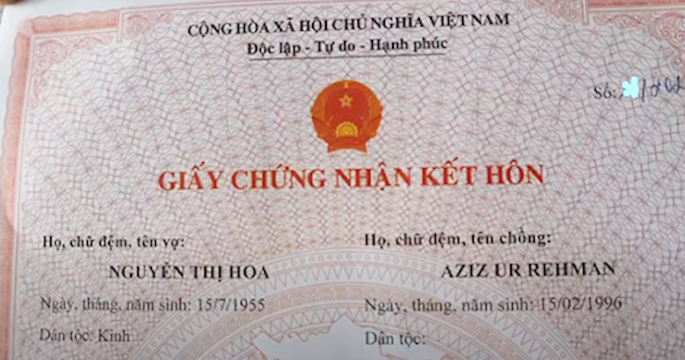 Nguyen, who is a mother of five, is happy to be with Aziz and is currently enjoying the moment.

Her youngest daughter revealed more about her mother’s relationship with her stepfather. She said it led to a lot of talk in the area, with neighbours expressing their suspicions.

She explained that her siblings were also against the relationship. But after seeing how Aziz cared about her mother and seeing her happy, people got used to it.

“At first, when I heard that mum had just met Rehman, the whole family protested, no one liked it.”

“But later when Rehman came back, I saw that he was very enthusiastic about her so we were glad to see her happy.

“At first, everyone felt awkward but we gradually got used to it.

“This man and woman loved each other very much, going up the stairs, she went before him, he looked to see if she fell or not. At first, it was very embarrassing, but now I am proud.”

Following the marriage, Nguyen’s daughter said that her mother’s happiness has resulted in the family no longer caring about the age gap.

Dhiren is a journalism graduate with a passion for gaming, watching films and sports. He also enjoys cooking from time to time. His motto is to “Live life one day at a time.”
Brothers launched ‘Savage’ Baseball Bat Attack on Shopkeeper
Pakistani TikTok star Ghani Tiger demands Justice for Father’s Murder