Nora Fatehi took to Instagram to share photos in which she looked stunning in a turquoise Herve Leger co-ord set.

The actress is known to regularly flaunt her figure.

Nora Fatehi shared photos from a recent photoshoot on Instagram with her 35.2 million followers.

Nora can be seen wearing a turquoise co-ord set from the fashion house, Herve Leger.

The blue ensemble consisted of a midriff-baring cropped top with full sleeves.

The dramatic sleeves were embellished in blue, silk frills near the cuffs.

Nora paired the top with an elegant pencil skirt with a thigh-high slit.

Nora Fatehi makes a fashion statement every time she steps out.

Shared on November 25, 2021, the photos instantly went viral and have since amassed over 1.5 million likes and 8,000 comments.

Whilst she left her long hair open in wavy, messy curls with a side part, Nora completed her all-blue outfit with a pair of classic, silver-studded Christian Louboutin stilettos.

The Street Dancer 3D actress went on to credit her team who helped to put the look together. 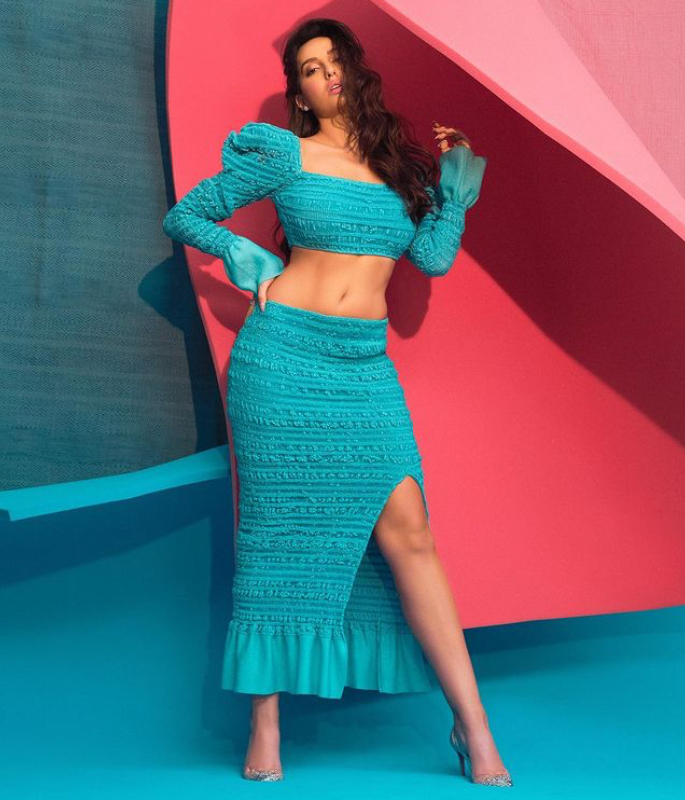 Nora further accessorised her look in diamond ear studs and a ring.

Herve Leger is known for its bandage dresses that seamlessly hug the body. The actress is known to regularly flaunt her figure in fitted, body-hugging dresses.

The Baahubali: The Beginning actress was also spotted at a film studio in Mumbai where she could be seen flaunting her toned figure in the blue outfit.

Nora continues to receive praise for her performance in ‘Kusu Kusu’ in Satyamev Jayate 2.

Opening up about the shoot, Nora Fatehi said:

“On sets, we often have minor incidents like the scraping of knees, bleeding of feet, or something like that, but this definitely has been my worst experience on set.

“The necklace was extremely tight around my neck because of the weight of the cape and since I was constantly moving, it kept brushing more leaving really horrifying marks at the end of the shoot.

“It almost felt like someone has tied a rope around my neck and dragged me across the floor, but because we had limited time for the shoot, I continued to film the song and only took a break after we completed the sequence.”

Nora was last seen in Bhuj: The Pride of India and Satyameva Jayate 2.

Nora Fatehi will next be seen in the upcoming comedy film Thank God alongside Ajay Devgn, Sidharth Malhotra and Rakul Preet Singh.

Ravinder is a Journalism BA graduate. She has a strong passion for all things fashion, beauty, and lifestyle. She also likes to watch films, read books and travel.
Karisma Kapoor looks Chic in Blue Cocktail Dress
Is Racism an Issue for Fashion?