In an intimate wedding, Bollywood star Neha Dhupia has married actor Angad Bedi. The happy couple broke the news on their social media channels on 10th May 2018.

Bollywood stars Neha Dhupia and Angad Bedi have tied the knot in an intimate ceremony that took place on 10th May 2018 in Delhi.

The hush-hush wedding came as a surprise to the duo’s fans as well as their Bollywood buddies.

The wedding was conducted in a traditional Sikh ceremony. Angad and Neha broke the happy news on the morning of 10th May.

“Best decision of my life.. today, I married my best friend. Hello there, husband! @Imangadbedi.”

Best decision of my life.. today, I married my best friend. Hello there, husband! @Imangadbedi ?? pic.twitter.com/a2ePsaXUNN

Soon after, congratulatory messages flooded in from fans and friends in the industry, including Neha’s close pal, Karan Johar. The filmmaker took to Twitter to congratulate the couple:

“My darling and most special friend @NehaDhupia who l love and adore dearly is married to the gentleman and talented @Imangadbedi !! Here’s wishing them decades of unconditional love!!!!”

My darling and most special friend @NehaDhupia who l love and adore dearly is married to the gentleman and talented @Imangadbedi !! Here’s wishing them decades of unconditional love!!!!??????????? pic.twitter.com/LG1nR99aSW

Other industry peers followed suit including Anupam Kher, who tweeted:

“Congratulations and best wishes @NehaDhupia and @Imangadbedi for your journey together. May God give you both all the happiness in the world. Love and prayers always.” 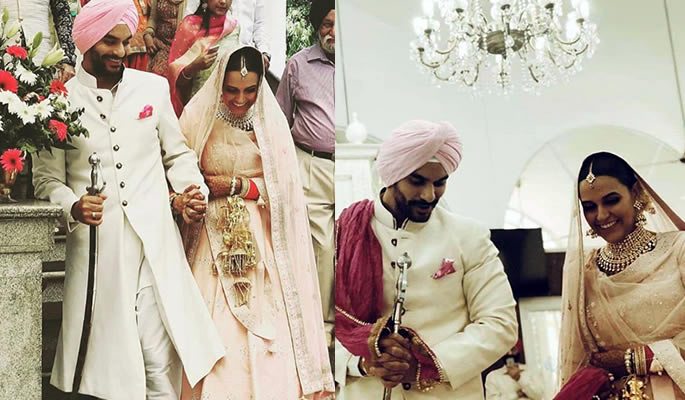 “@Imangadbedi and @NehaDhupia many congratulations you crazy bunch! So happy for the two of you. Rab rakha.”

Even Angad’s father, Bishan Bedi posted a picture alongside the happy couple. He added a hilarious caption: 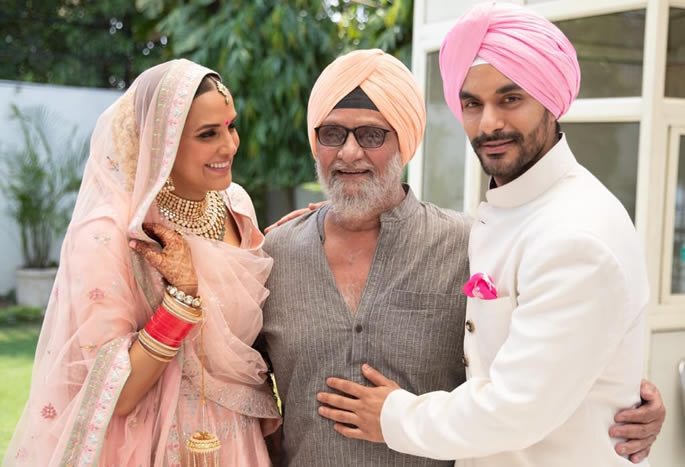 She kept her hair in a traditional bun and decorated with flowers.

Angad looked every inch a dapper groom as he matched his wife in an all-white sherwani and pink turban.

The Tiger Zinda Hai actor accented the plain sherwani with a pink pocket square and shawl. 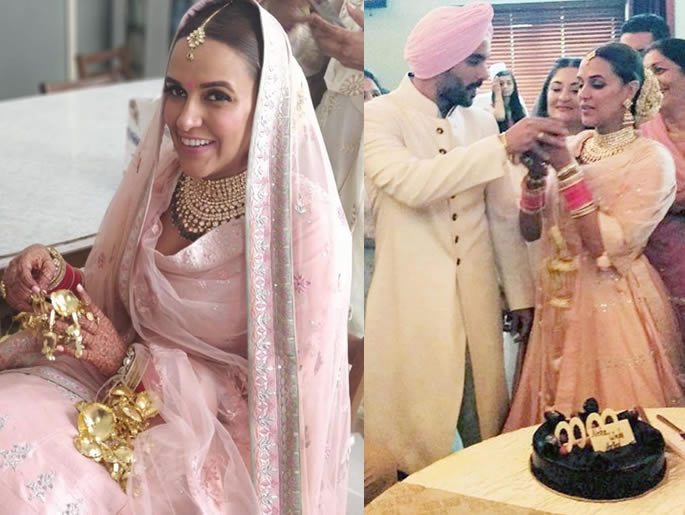 A day earlier, for their Mehendi ceremony, Neha wore a royal blue outfit with gold brocade. Angad opted for a black sherwani.

The union of Neha and Angad has come as a surprise for many.

For the longest time, rumour mills were rife about Angad Bedi’s relationship with popular model and dancer Nora Fatehi.

The two were seen hanging out together at almost every event together and reports even suggested that Angad referred to her as his ‘girlfriend’.

Nora, on the other hand, had mentioned on several occasions that Angad was like a best friend to her and that she valued his existence in her life.

Although in March 2018, reports of their break-up were abuzz and the reason for it was rumoured to be his increasing closeness to Bollywood diva Neha Dhupia.

In an interview with Hindustan Times, however, Nora insisted: “Honestly, I don’t care about Angad’s closeness to Neha. It really doesn’t concern me and I’ve got better things to worry about.”

Angad and Neha’s budding romance started to become the talk of the town ever since the duo were seen matching dance steps at a mutual friend’s wedding.

If that wasn’t a big deal, Angad and Neha’s praising on social media celebrating each other’s work was a definite sign of something brewing between the two.

After Neha’s cracking performance in Tumhari Sulu, Angad had shared a special post of admiration for Neha.

@nehadhupia you rocked Maria!! Underplayed and you kept it completely real. Loved the scene when u ask her to join.. And how she had you at hello…?#tumharisullu #aslibijlii onwards and upwards keep making us proud!! A rare talent in the industry.. #cinema

But considering the pair are extremely active on social media and their Instagram exchanges with each other being quite suggestive, an actual wedding has come as an unexpected but happy surprise.

DESIblitz congratulates the happy couple on their beautiful wedding and future marriage!