Most Famous and Incredible Bodybuilders of India

Bodybuilding is a huge sport and Indian participants have become internationally recognised. We look the most famous bodybuilders from India.

"His routine consists of weight training and cardio to build muscle and to burn fat."

Strength training is a major way of keeping fit for many.

However, there are some who develop their strength training into scultping their body to the degree that it becomes part of their everyday life.

Bodybuilders are those people as they strive for their perfect body by putting in the hard work to achieve it.

They even compete at bodybuilding events all around the world to showcase all the hours which are put in the gym, some of which have gained success.

More importantly, it has netted them international recognition for their efforts.

Here are some of the most famous Indian bodybuilders who have gained international fame on the fitness circuit. 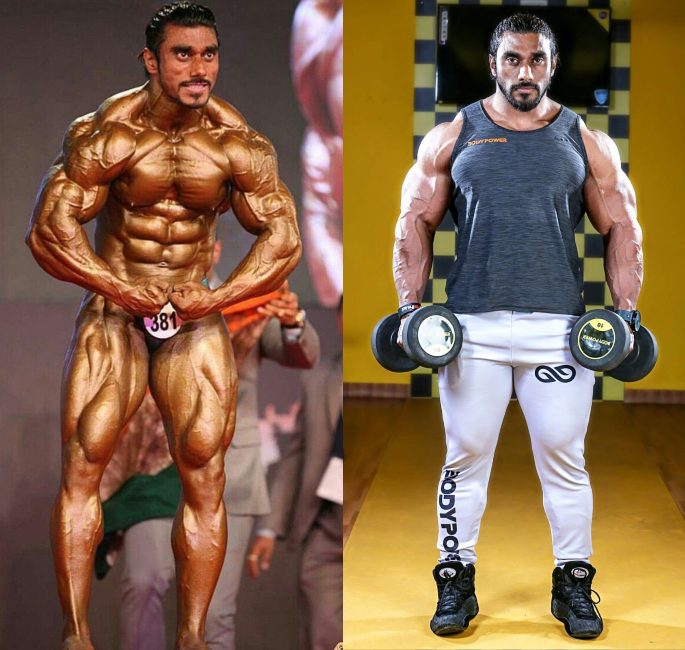 Sangram Chaugule is one of India’s most famous bodybuilders, having begun in the year 2000.

The Pune-based bodybuilder has won numerous titles which include Mr. Universe (85Kg category) at the 2012 World Bodybuilding Championship in Bangkok, Thailand.

He is also a six-time winner of Mr. India.

All the success came with hard work at the gym.

Usually, Sangram works out for three hours but during the competition season, that increases to almost five hours.

His workout consists of a mix between strength and cardio training to build muscle and to avoid fat. He also runs and does yoga to balance his workouts.

Sangram eats six meals per day which combine an optimum intake of proteins with fewer carbohydrates and some fats.

He does this so that his body is getting the nutrients it needs and to maintain it during his gruelling workouts.

The bodybuilder trains others to get in shape and states that there is no age limit when it comes to bodybuilding.

Sangram’s dedication to bodybuilding and fitness, as well as helping others with their fitness has made him very successful and one of India’s most famous bodybuilders. 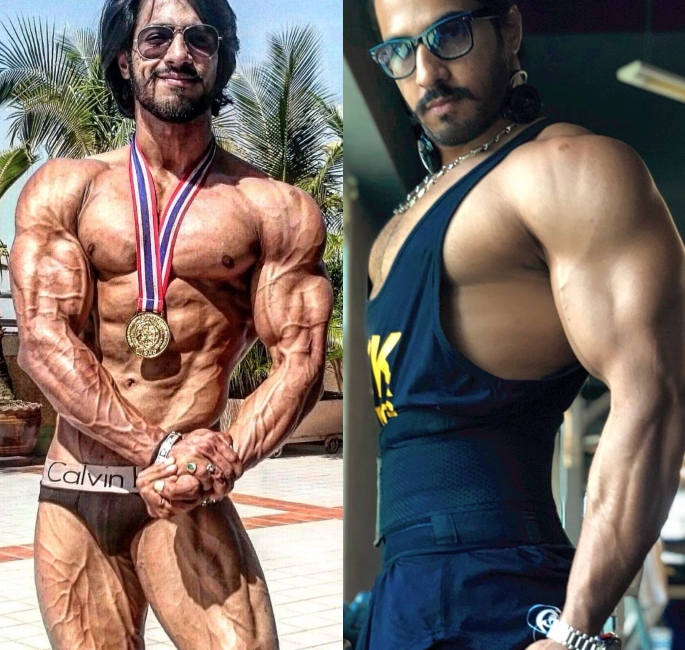 Thakur Singh only began professional bodybuilding in 2015, but he is already one of the most famous.

Prior to that, Thakur was a commercial pilot who turned to modelling and acting which grew his reputation.

Throughout that period, bodybuilding and fitness was one of his main passions which he did regularly.

In 2014, Singh took a break from acting to devote all his energy into bodybuilding. Within a year, he had a muscular and bulky physique.

This was when he decided to compete in bodybuilding. In 2015, he competed in Fit Factor – Mr. India where he won silver in the Men’s Fitness Physique category.

It proved to be a successful year for Thakur as he took home the bronze at the 49th Asian Championship in Uzbekistan.

This finish only motivated Thakur further when he entered the prestigious World Bodybuilding and Physique Championships in Bangkok.

His fitness routine won him many fans and won the gold medal.

Thakur’s bodybuilding credentials provided him with several film opportunities and have quickly made him one of India’s most recognisable bodybuilders. 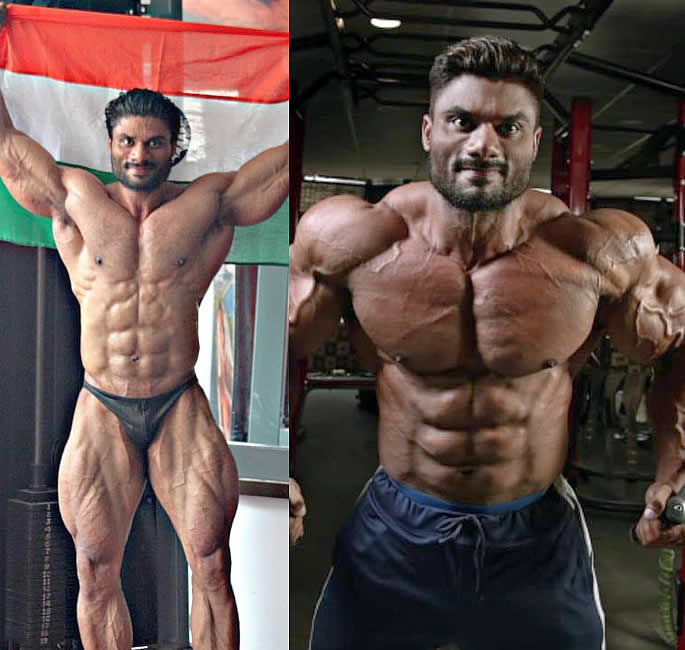 Wasim Khan is one of India’s most successful bodybuilders and one who has created history.

He won the 2016 International Federation of Bodybuilding and Fitness (IFBB) event in Rome.

This made him the first Indian to win back to back IFBB titles, having won the title in Slovenia in 2015.

During the event, the Kashmir-born competitor won a total of three medals against approximately 350 bodybuilders from 37 countries.

Upon winning in 2016, Wasim said that it was his proudest moment and took the opportunity to thank those who inspire him.

He said: “I want to thank all my fans who are always there for me in my tough times.”

Wasim also thanked India for providing him with the opportunity to showcase his talent on the international stage.

Not only did Wasim gain a huge number of supporters in Italy, but also in his home country.

The fitness athlete has become very famous in the world of competitive bodybuilding since his historic triumph. 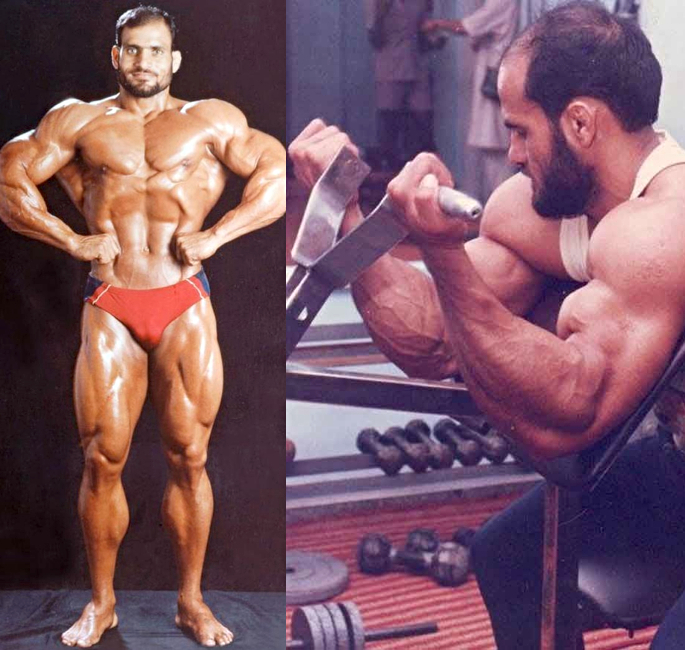 Premchand Degra is one of the first Indian competitive bodybuilders when he started during the 1980s.

Before he turned to fitness, Premchand was an accomplished wrestler throughout early adulthood.

Because of his wrestling background, Degra was already muscular.

The period in which Degra began bodybuilding was extremely difficult as he had limited resources and there was no exposure to it.

His fitness routine consisted of 2,000 press-ups and squats as well as nine miles of running.

He went on to win the IFBB Asian Amateur Championships three consecutive times.

Degra’s finest moment is becoming the first Indian to win Mr. Universe at the World Bodybuilding Championships in 1988..

Premchand’s success as a bodybuilder saw him awarded the Padma Shri in 1990.

His dedication to fitness on-stage has paved the way for more Indian bodybuilders to make a name for themselves. 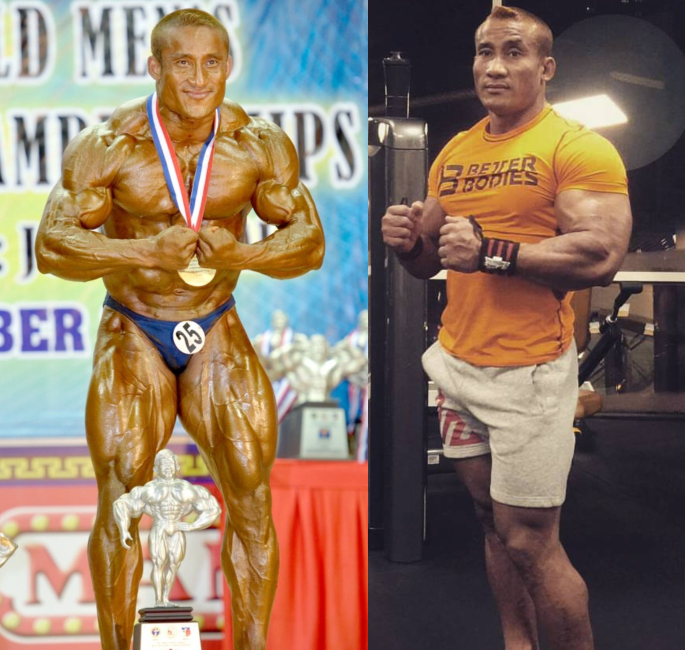 A multiple time World Champion, however, it was not always positive for Arambam Boby.

He came from a poor background and had to do various jobs to earn some money so that he could eat.

Through hard work, Arambam went on to do major things in the bodybuilding world.

The Manipur-born fitness fanatic first entered the competitive side by competing in junior National championships.

It only inspired Arambam to pursue it full-time and he went on to become an eight-time World Champion, all of which are consecutive.

His success has been an inspiration in India and now Arambam is aiming to persuade the government to provide support.

He said: “I haven’t got any support from the government.”

“One foreign trip drains me financially.”

The secret to Arambam’s physique, apart from many hours in the gym, is his diet.

It mainly consists of chicken and at least 15 eggs per day.

While Arambam continues to plead for funding, there is no denying that his constant training and success has made him into one of the finest Indian bodybuilders. 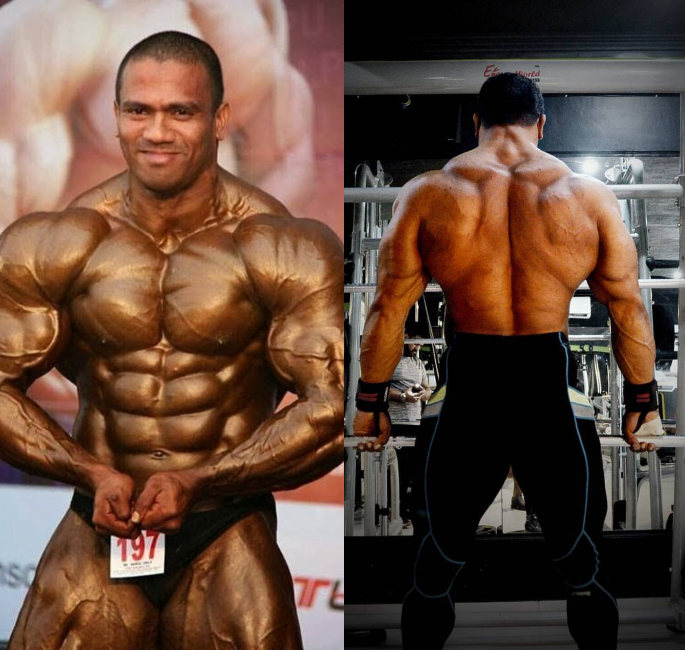 Not only is Amit Chhetri a winner of multiple bodybuilding competitions in India, but he is also a constable of Uttarakhand Police.

His fitness routine consists of heavy weight training as well as some cardio to build muscle and to burn fat.

It also involves following a strict diet of proteins with minimal carbohydrates.

Amit’s dedication to his fitness has seen success in bodybuilding contests.

His highlight is winning the title of Mr. India during 2016 in the 100 Kg category.

Amit is internationally recognised and praised by his fellow police officers back home, especially since he entered a competition in 2015.

He represented his country at the Fairfax World Police and Fire Games in Virginia, USA.

More than 42,000 competitors from 90 countries entered and Amit brought laurels to India by winning gold in the 100 Kg category. 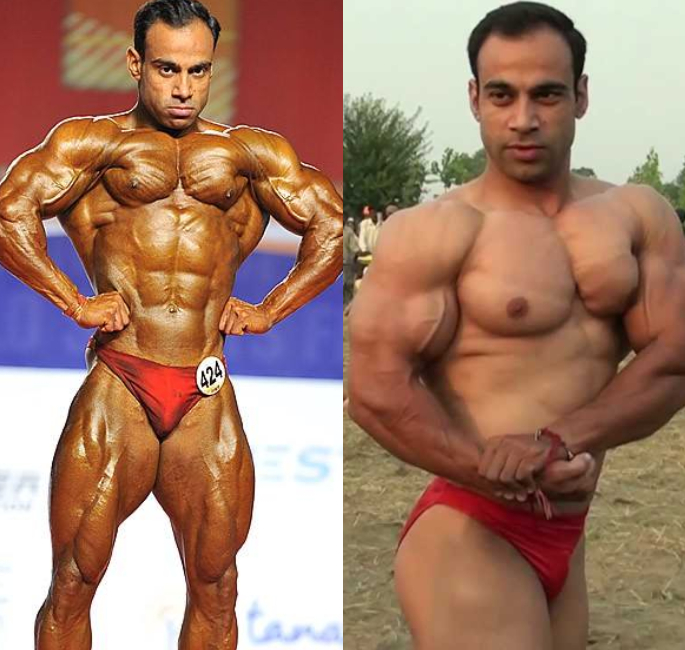 Not only is Hira Lal a successful bodybuilder, but he is also the head constable with the police in Kapurthala, North West India.

Hira is recognised for being the second Indian to win the Mr. Universe title at the 65th World Bodybuilding Championship.

Upon winning the title, Hira said: “It is a dream-come-true, I am extremely happy to have won the title for the country.”

As well as Hira’s tough training workouts, it is his diet which helped him to bulk up for bodybuilding.

He became a vegetarian in 1997 when he decided to stop eating meat for religious reasons, it ended up being positive. 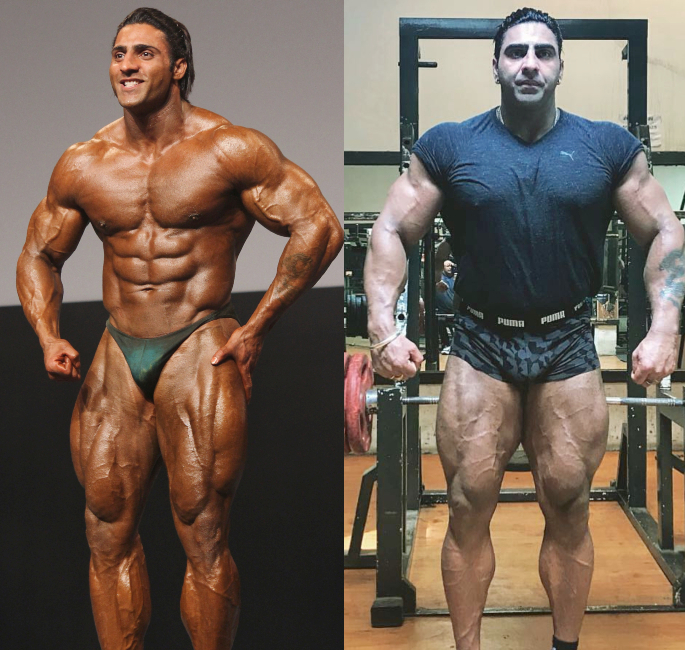 Varinder Ghuman is credited as being the first Indian bodybuilder to turn professional.

He is also the world’s first bodybuilder who is completely vegetarian.

As a result, he is immensely popular on the bodybuilding scene.

Varinder is always posting videos on his social media to inspire others to work out and give out tips.

The bodybuilder is known around the world and was even appointed by former bodybuilding legend Arnold Schwarzenegger to promote his health products in Asia.

Varinder’s huge physique has also given him opportunities in several films, including a leading role in 2012 Punjabi film Kabaddi Once Again.

A lifelong bodybuilding has enabled Varinder to be able to pursue other ventures. 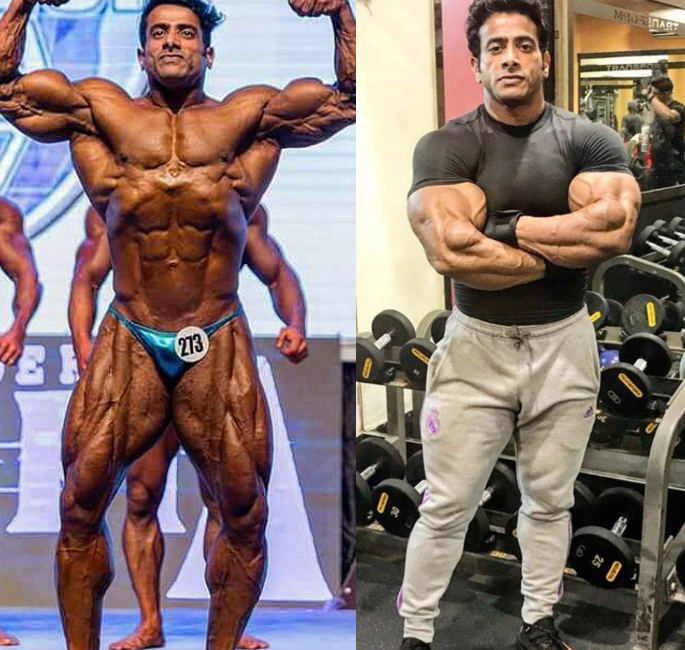 Bodybuilding and fitness was never a doubt for Suhas Khamkar when growing up.

He comes from a family of fitness experts and has other inspirations for pursuing bodybuilding.

In his hometown of Kolhapur, he watched wrestlers and bodybuilders. His fitness idol was Arnold Schwarzenegger and looked to become a world champion.

Suhas has won several bodybuilding contests and has brought a lot of accolades to India.

The price of bodybuilding is an expensive lifestyle for Suhas.

He said: “I competed as a bodybuilder for the last 12 years and it was always a struggle to meet food needs.”

To maintain such a physique, Khamkar goes through a rigorous daily fitness and diet routine.

He has approximately 20 eggs plus two kilograms of chicken and fish.

In terms of his work out. He trains primarily with weights for six to seven hours a day, working on specific areas of the body.

It has got him huge success and has seen Suhas become one of the most popular Indian bodybuilders. 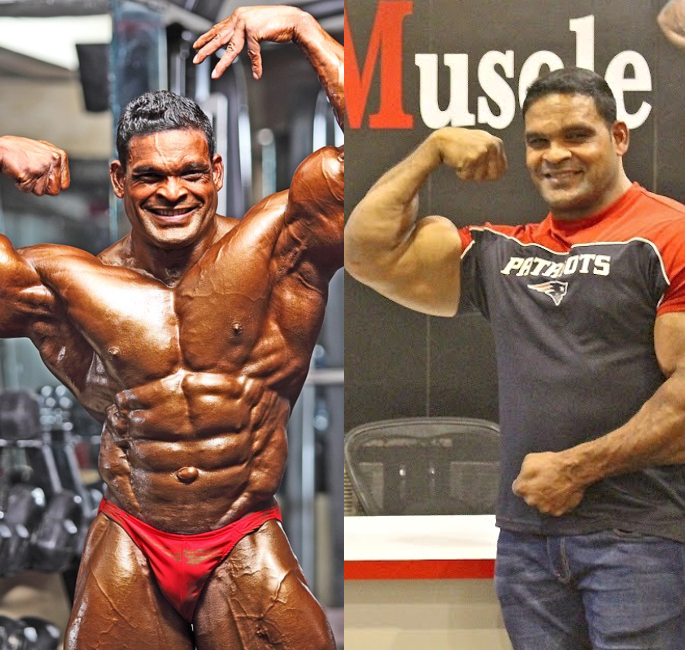 Rajendran Mani went from an Indian Air Force soldier to one of India’s most successful competitive bodybuilders.

He was bodybuilding in his teenage years, winning district level medals.

His massive physique earned him the nickname “Indian Super Hulk”.

Rajendran is a two-time world champion as well as being awarded the Mr India Champion of Champions multiple times.

However competing and managing his body came at a cost, at a time when Rajendran was at his peak and one step away from competing for the title of Mr. Olympia.

The expensive nature forced him to shut his once-thriving New Delhi gym and move back to Chennai.

He said: “I was totally broke. Bodybuilding, especially in the heavyweight class, is very expensive.”

“We need to spend a lot of money on our diet, which includes intake of plenty of food supplements.”

Rajendran defied the odds to become one of India’s most famous and successful bodybuilders but could not continue due to the losses his gym was making.

These bodybuilders all come from different backgrounds and got into fitness for a number of reasons.

Their passion for fitness led them to compete in bodybuilding competitions around the world.

It has gained them huge success and has provided some with other opportunities which will get them more recognised.

All of which have become very famous in India. The question is, who will be the next big bodybuilding star in India?