British Asian rapper M.I.A. is back in full force with an exciting new album, A.I.M.

The much-awaited record sees the Sri Lankan artist collaborate with none other than pop sensation Zayn Malik for the track, ‘Freedun’.

The song itself was unveiled during a special BBC Radio 1 interview with Annie Mac on September 1, 2016.

M.I.A. told Annie that the collaboration with Zayn, one of the hottest music artists of the moment, ‘just kind of happened’:

“He’s from Bradford, which I always thought was kinda cool.

“It was a virtual situation, I was already in India, and had handed my album in. He sort of called up and got onto the song just as I was heading to the airport.”

The pair even tweeted an adorable exchange on Twitter:

The track is an unusual one for both artists. M.I.A admits that recording the song brought her out of her comfort zone with its pop sounding vibes:

“I made this song quite a long time ago, and I always thought it was sort of like too mainstream sounding for me.

“It just seems like it’s perfect to have that – if I was going to have a collaboration and have someone like Zayn, this is like the perfect song.

“You know, it sort of takes me out of my comfort zone, but kind of takes him out of his a little bit as well.”

The lyrics of ‘Freedun’ depict M.I.A. realising her own self in a laid-back rap style:

“I just got my own little mission/ A crew bigger than a politician/ Yeah, history is just a competition/ Do you wanna sign my petition/ It’s for the people with dedication.” 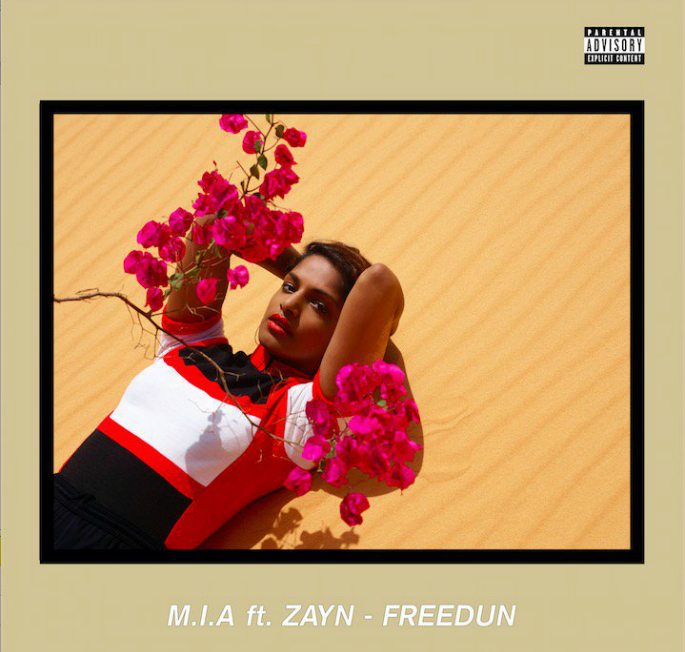 The song is a cathartic one for the rapper, who had come out a long relationship and wanted to ‘figure out what life is’:

Listen to the incredible track, ‘Freedun’, and M.I.A.’s full interview with Annie Mac below:

M.I.A. explains: “This is like a floaty song. I had to put my aggressive brain to bed on this one.”

Zayn stays in the background with smooth and relaxed vocals while M.I.A takes on her ‘Free-du-du-dun’ chorus in her signature rap style against the raw beat of drums.

With M.I.A.’s Sri Lankan descent and Zayn’s Pakistani background, the track unearths Eastern tones that melt into an urban setting.

Zayn croons: “All the stars are still shining/ But you’re the only one I see/ I can feel when your heart beats, yeah/ But you can’t keep your eyes off me.”

Reflecting the Eastern quality of the track, M.I.A. shot the video for ‘Freedun’ out in the Himalayas.

It really is fantastic to see two talented British Asian artists come together and collaborate in such a way.

You can download ‘Freedun’ from iTunes, along with the rest of M.I.A’s new album A.I.M from September 9, 2016.

Aisha an English literature graduate, is a keen editorial writer. She adores reading, theatre, and anything arts related. She is a creative soul and is always reinventing herself. Her motto is: “Life is too short, so eat dessert first!”
Deelite MC talks Music and Mental Health
Armaan Malik ~ A Very Special and Versatile Singer