Mehwish Hayat: The Voice of the Nation 2028?

Can Pakistani actress Mehwish Hayat be the Prime Minister of Pakistan in 2028? She exclusively shares her political aspirations with DESIblitz.

Pakistani star Mehwish Hayat is a rare celebrity who has proven her credibility both on and off the screen.

The Karachi born Mehwish began her career as a full-time actress and model. Mehwish came to the international forefront, being the face of an anti-terrorism campaign in Pakistan.

Pushing the boundaries and defying conventions, she took on challenging roles in major drama serials and high grossing Pakistani films.

Her lead roles include the feisty and determined character from the serial Dillagi and the headstrong Parsi journalist in Actor in Law (2016).

Through these two strong roles and with the help of various platforms, Mehwish went onto highlight issues such as women empowerment. This became a key topic for Mehwish, as she reassured girls that they can play an important role in society.

She also encouraged them to stand firm in accomplishing their goals and life purposes.

Two years later, the acting talent of Mehwish saw her taking up yet another unconventional role in Load Wedding (2018). The film tackles taboo subjects like widows marrying again and dowry.

Load Wedding had such an impact that the Punjab Assembly is making legislative efforts to outlaw dowry in the province.

Watch exclusive interview with Mehwish Hayat on 2028 Hope and Politics: 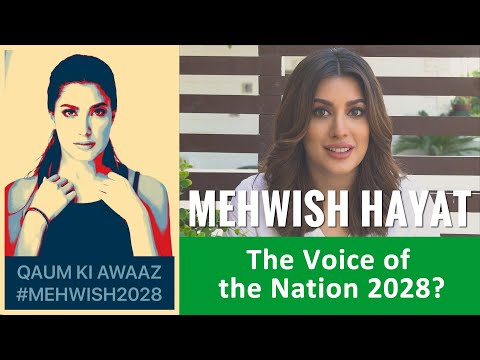 Besides holding a prestigious humanitarian position and being conferred with the Tamgha-e-Imtiaz, Mehwish has eloquently demonstrated her powerful capabilities when speaking in Pakistan and at various key forums around the world.

Mehwish has voiced her concerns about the rapid decline of Pakistan hockey and the Kashmir issue.

Whilst receiving the ‘Pride of Performance’ award during a 2019 event in Oslo, Mehwish presented a true image of Pakistan, offering a peaceful and harmonious message to the world.

She requested Bollywood to stop vilifying Pakistan and others projecting a very stereotypical perception of her country.

Earlier in 2018, she was honoured with a special international award from the United Nations (UN) in America.

Delighted by the great honour, Mehwish told the media that she would work even harder to strengthen Pakistan’s name further.

Having achieved so much and been the rising voice of Pakistan, many big questions arise. Has Mehwish contemplated entering politics? Does Mehwish have the credentials to lead Pakistan one day? 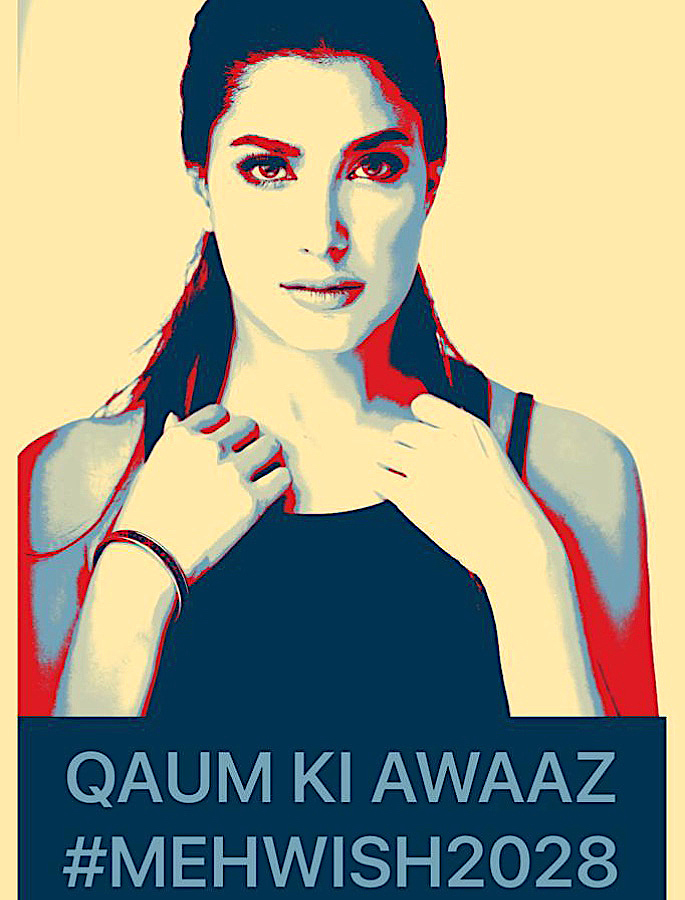 Mehwish Hayat shared her thoughts about 2028 and politics. Breaking the news first to DESIblitz, Mehwish has given a hint that she may stand in the 2028 Pakistan General Election.

During late 2019, a Twitter user claimed that she had made a “giant leap towards the Premiership’ for 2023. In response to the chat, Mehwish jokingly stated ‘2028.’

According to Mehwish, a fan also created a 2028 hope poster based on the Obama campaign, describing her as the ‘Qaum Ki Awaaz’ (The Voice of the Nation).

Appreciating the slogan, Mehwish is very thankful to many of her fans who feel she is competent enough to be a future Prime Minister of Pakistan.

Despite having a lot to learn, Mehwish says that she has eight years to consider her position. In reply to a question about what she most enjoys about politics, Mehwish said:

“I think that I am becoming aware of how much of our lives is impacted by global politics.

“Something that happens in Washington could have an impact on the price of food in Karachi – we are that interconnected and interdependent these days. This fascinates me.

“I would like to say that I love the power that comes with politics – don’t get me wrong, I am not some sort of megalomaniac.

“For me, politics is about being in a position to make a difference in the lives of people.”

So with a keen interest in politics, Mehwish has the potential to fulfil any political ambitions she may have. 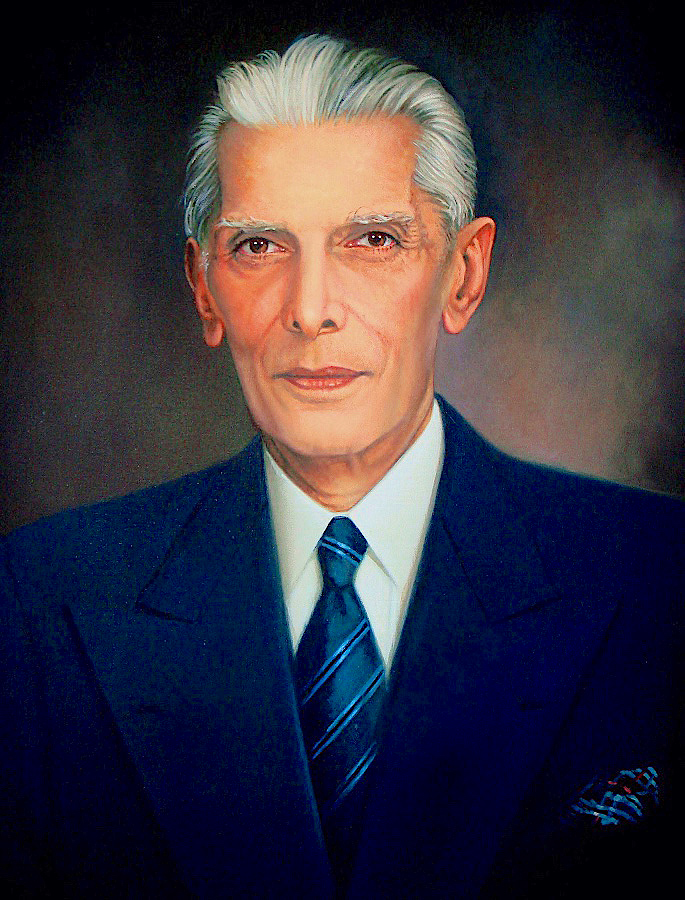 Mehwish Hayat takes inspiration from various leaders from the past, with different reasoning for each one of them.

She claims historic figures such as Cleopatra, Martin Luther King and Nelson Mandela inspire her very much.

The visionary Muhammad Ali Jinnah, Quaid-e-Azam, founder of Pakistan has also had a huge impact and influence on Mehwish.

However, from a spiritual and life perspective, she reveals that the most inspirational leader is the beloved and graceful Prophet Muhammad (PBUH).

Mehwish wishes to incorporate the principals of his teachings whenever leading from the front.

When asking about the leadership qualities she possesses to become a successful future PM of Pakistan, Mehwish replies saying:

“Wow, you are making this sound like an election debate already. Talking hypothetically and only hypothetically, I think that I have an analytic mind that questions everything.

“I also feel that I understand what the needs and worries of the average people are.

“It is really touching that they reach out to me on social media and ask me to highlight issues of concern to them.

“I also am a fighter, once I get my teeth into something, I will not let go till I achieve it.”

Mehwish certainly has a firm grip on the concerns and issues that matter most to the people. 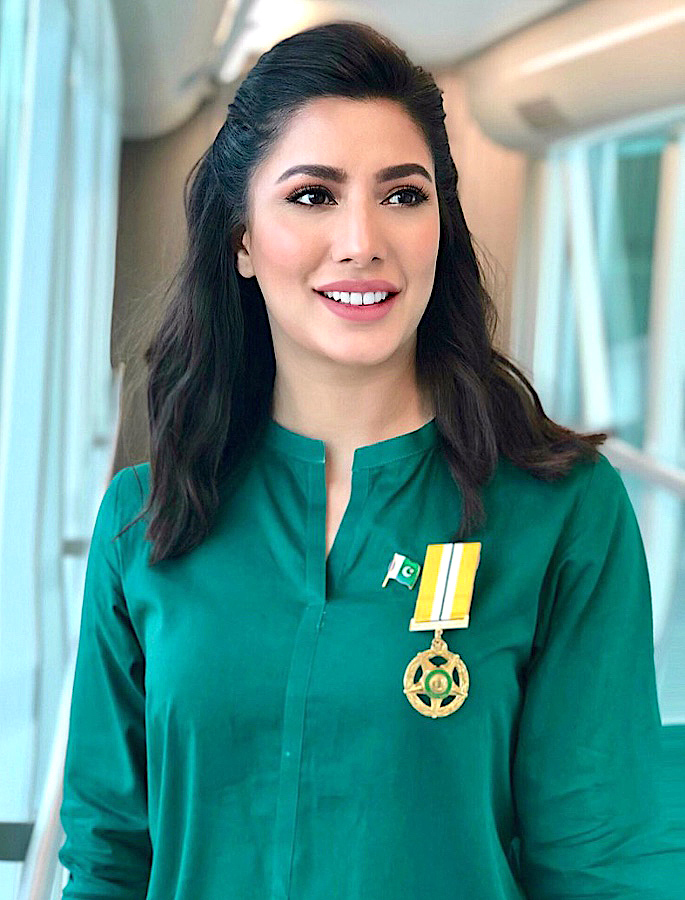 Mehwish Hayat indicates to us that she will not support any specific political party in Pakistan.

Mehwish answered a question about what measures she would take for the betterment of Pakistan if ever elected PM.

The movie icon mentioned that she cannot set out a manifesto as it is too early to preempt the social and political climate in 2028.

Though Mehwish is adamant about combating partisan politics in Pakistan, uniting everyone under one universal banner.

Emphasising the importance of being Pakistani first and foremost, she elaborates on rising above party politics:

“I think that the major problem with Pakistani politics is that it is very partisan. You are either one party or another and never shall the twain meet.

“Politics is personality-driven and not necessarily based on manifestos or track record. People are born into a party and those loyalties continue for generations.

“If I were to stand, what I would like to do is to rise above this and find a way for unifying the nation.”

“To borrow from another campaign, we have to put Pakistan first. I hope to find a middle ground and find something to offer everybody across the board.”

It will be a unique first if Mehwish happens to successfully pull off this middle position in Pakistan.

When analysing the government led by Prime Minister Imran Khan, Mehwish feels he is doing the best he can, given the circumstances.

She believes people have to understand the mess that he had inherited will take time to fix. She also mentions that he “doesn’t have a magic wand.”

Being Decisive and International 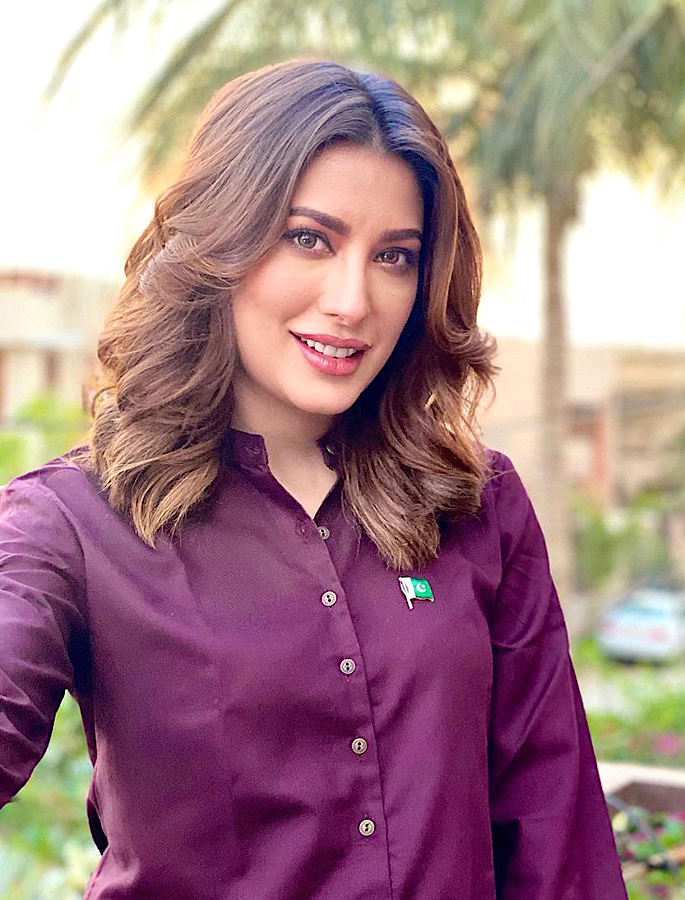 Mehwish Hayat definitely has some very good qualities, which are vital for the role of a Prime Minister.

Identifying her decisive nature as a key quality, Mehwish explains the significance of being able to make tough decisions:

“I think that I am very decisive in all aspects of my career and my life. In Pakistan, as a woman especially in the media, I have to be decisive to stand my ground or I’d get eaten up alive.

“I cannot afford to be weak at all – there are too many wolves out there waiting to pounce on you.”

Sharing an opinion about her negotiating approach to International politics, Mehwish considers equality being very important no matter who is across the table. She agrees with the policy that Imran Khan has adopted to foreign affairs:

“I am most impressed with the way that Imran has been carrying himself internationally.

“He is not prepared to play the underdog and fights for Pakistan to be accepted on an equal footing. We are no less than any other country and have so much potential given the opportunity.

“Imran has recognised that and is fighting our corner at every opportunity.”

It seems to appear that Mehwish will want to hold her ground if ever elected the Prime Minister of Pakistan.

Role of Women and Beyond 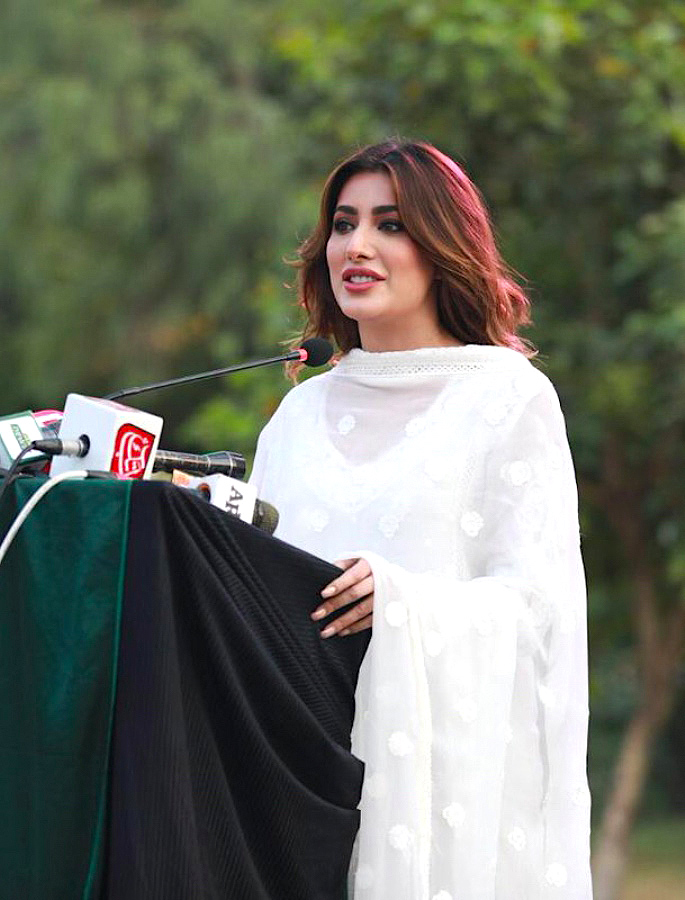 Mehwish Hayat who was appointed ‘Goodwill Ambassador for Girls’ by the Ministry of Human Rights is a big advocate for female rights.

She takes the view that women can play a pivotal role in Pakistan’s future development. Elaborating on this, Mehwish says:

“I think that it is impossible for me to contemplate any sort of future for Pakistan without the involvement of women. I mean how can you ignore over 50% of the population because of their gender.

“We are no longer the image that films and dramas unfortunately still show us as. Women in Pakistan are CEOs, fighter pilots, doctors, politicians, engineers and are in every single profession.

“Pakistan will stagnate if women are not part of its future development.”

Looking ahead, Mehwish is under no illusion that Pakistan will be a Utopian state by 2032. Explaining the realities of the country, Mehwish is hopeful about the future:

“The difficulties that we face are too deeply ingrained and it will take a generation or more for there to be any quantifiable change.

“I hope that by 2032 we will have a more equitable society with a more educated population and less poverty.”

“I would want that by 2032 everybody will have a roof over their head and nobody would go to sleep hungry.”

Whilst nothing is concrete yet, some will come to the conclusion that her political journey has already begun. This is because she constantly raises her voice about issues relating to terrorism, Islamophobia, sports and human rights.

The road ahead is long, but she may well become the Prime Minister of Pakistan if rightfully selected by the masses.

If elected she would be the second female PM of the country after Benazir Bhutto (late). However, only time will tell if Mehwish Hayat actually stands or not.