Sabar Ali, a married dad was caught and then jailed for attempting to meet a ’14-year-old virgin’ to have sex after an online grooming chat with a fake profile created by paedophile hunters.

Sabar Ali, a married dad, aged 45, was caught trying to meet ‘a 14-year-old girl who was a virgin’ in a sting operation by paedophile hunters known as the ‘Guardians of the North’, after chatting to ‘her’ on the social media app Skout.

Ali was sentenced at Newcastle Crown Court and jailed for 15 months together with a five-year sexual harm prevention order and ten years on the sex offenders register.

The chat which led Sabar Ali to the jail sentence was in fact with a fake profile created by the paedophile hunters on the app and not a 14-year old girl.

Thinking he was chatting with an ‘underage girl’ whilst at work, Ali asked her if she lived with her parents, and if they were home, asking “u alone in the house” to which the reply was “Yh”.

He then asked “what time they come home” and when being told “In the morning”, he replied “really”, “can I come to ur home for sex”. To which the reply was “no not done anything before”.

The conversation then quickly moved to him asking her if she was a virgin and when being told “Yh”, Ali replied, “its gonna be really painful for you”.

When Ali was then asked “U don’t mind that I’m 14”, his response was “I like young…” going onto say if she didn’t mind he was older, “u will enjoy with me”.

In the chat, he asked the girl to send him a nude image and when she refused, he insisted saying, “I am your BF [boyfriend] now”. He even sent a graphic nude of himself.

After chatting with ‘the girl’ on July 26, 2017, within seven hours, the married dad arranged to meet this girl on Chapman Street in Sunderland thinking he was going to have sex with her.

However, instead of seeing this ’14-year-old virgin’, he was met and confronted by members of the Guardians of the North. 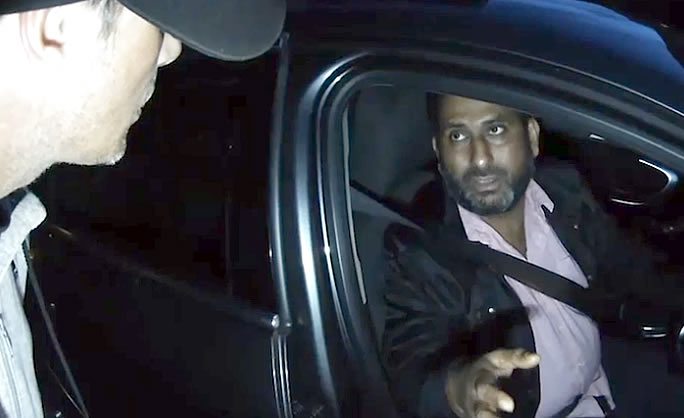 A video shot by the vigilantes shows Ali in his car with the window down being met by them.

Ali was asked, “Where does your wife think you are now?”, “at work Ali?” to which he replied “Yeh.”

After realising he is found out for attempting to meet an underage girl for sex, Sabar Ali begins pleading while being filmed, saying, “Please my friend. If you see me in anymore in this area just kill me.”

The police were alerted and Ali who is from Tatham Street in Sunderland was arrested.

Newcastle Crown Court heard during his trial that even whilst knowing the girl he was chatting to was a minor and he still persisted on wanting to meet her and to have sex.

At first, he claimed he had no bad intentions and was going to tell the girl “to go home” but then agreed to a guilty plea of attempting to meet a child following sexual grooming.

Judge Penny Moreland sentencing Ali described the events of what took place within hours of him meeting this imaginary person on the app:

“That person told you they were in fact 14.

“By 7pm you were asking to go to her house for sex. You arranged to meet at 10pm.

“I am quite satisfied that what you had in mind that night was to have sexual intercourse with a 14-year-old girl.”

Despite Ali’s defence lawyer arguing for a suspended sentence because this is an isolated incident for Sabar Ali and he is extremely ashamed of what he’s done to him and his family, judge Moreland said:

“In my view, an immediate custodial sentence is the only appropriate sentence for someone who arranges to have sexual intercourse with a 14-year-old girl.”

Cases of this nature are increasing with online grooming leading to major dangers for young people online and subsequently offline.

Comparingly, many may object to the stance being taken by groups like the ‘Guardians of the North’ but without such efforts, this case could’ve led to a 14-year-old girl to be sexually groomed and abused for real.