A married man who posed as a doctor to indecently assault a young 14-year-old girl over a fifteen years ago has been exposed by the victim and jailed.

"He told her he was a doctor and 21-years-old. None of this was true."

Married father, Humaiun Khan, aged 45, has been jailed for three years after his hidden secret was exposed when he posed as a doctor to sexually abuse a young schoolgirl who was 14-years-old at the time.

Khan had committed the indecent act over a fifteen years ago. It was not until the victim watched a television programme on sexual abuse that she decided to bring her experience with Khan to the attention of the police.

His trial, at Newcastle Crown Court, revealed that Khan got the young school girl to trust him after he posed to be a young doctor, whilst he was married with children.

During a series of phone calls between Khan and the victim, he told her that he would “care for her” and gave her a lot of praise, winning her over.

“He told her he was a doctor and 21-years-old. None of this was true.

“She was so naive she questioned none of it.”

Khan had then arranged to meet the victim and told her to not to wear her school uniform but other clothes before they met at a Metro station.

He then took her for a coffee and some food, before taking her for a drive near the River Tyne.

However, whilst in the car, the girl soon realised that “he wasn’t all what he claimed to be” when drove her to a quiet and isolated car park and then tried to force himself upon her and sexually abused her.

Mr Currer told the court that the sex attack on the victim made her feel “powerless” and said:

“She continued to try to get away but her only means was running from the car and swimming across the Tyne to South Shields.” 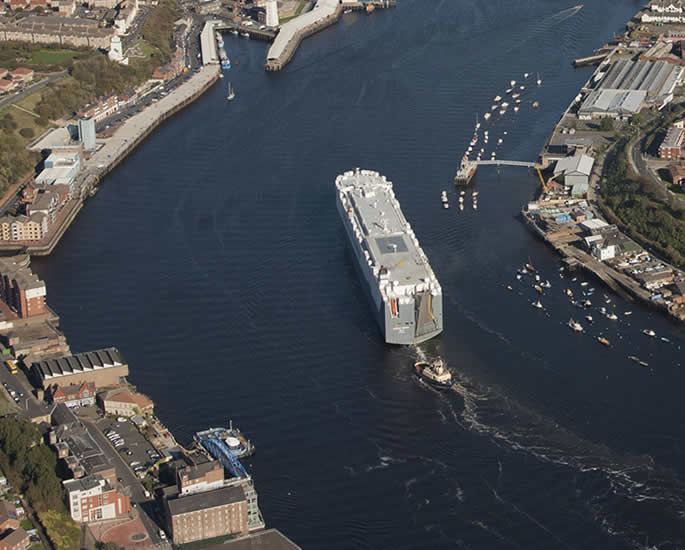 The victim was “physically sick” after the attack, the court was told.

To protect himself, Khan warned the victim not to tell anyone about what he did with her.

Khan gave the victim a mobile phone to keep in contact with him and told her he hoped to meet her again.

Mr Currer prosecuting said: “She contacted him by phone to say she wanted no more contact.”

Upon hearing this Khan threatened the young victim to stop her telling anyone about the sex attack:

“He said he had taken a picture of her naked breasts and would distribute them on the internet.”

“He said he would tell her friends and family what she had done.”

After this, the victim never saw Khan again but felt terrified and afraid to say anything to anyone. She was scared to report the sexual attack on her by Khan which had taken place in 2002 to police.

In 2016, the victim happened to watch a television programme which covered the issue of sexual abuse. After seeing it, she was prompted to go to the police along with her husband, to tell them what had happened to her in the past.

This led to the arrest of Khan.

During the trial in court, the victim agreed to stand in the witness box and courageously gave details of the abuse she endured and the impact it had on her for the rest of her life.

She told the court:

“When this happened I was a vulnerable child. He preyed on my vulnerability.

“I had to deal with it by myself. I can’t explain how much I was hurting inside, without being able to speak and seek support.

“It was absolutely disgusting, what he did. He even showed me fake [doctor] ID.”

Khan who is now aged 45 and from Hull, admitted to three offences of indecent assault against the victim.

“A message needs to go out, not just to you but those contemplating or having committed such offences, that the passage of time creates no hiding place from true allegations.”

As well as being sentenced to three years in prison, Khan is to be registered as a sex offender and was given a sexual harm prevention order for 10 years.

Sexual molestation and abuse is a serious offence and must be reported, even if it took place in the past. If you or anyone else has been subjected to any kind of sexual abuse or indecent assault, contact the police or you can visit the Survivors Trust website for support and help.

Nazhat is an ambitious 'Desi' woman with interests in news and lifestyle. As a writer with a determined journalistic flair, she firmly believes in the motto "an investment in knowledge pays the best interest," by Benjamin Franklin.
Indian Husband allows his Wife to Marry her Lover
Indian Teenager Kills Girlfriend over Pregnancy Fears