Pakistani police raided a farmhouse near Islamabad which was hosting a dance party with music and alcohol and arrested over 40 people.

Pakistani police in Islamabad raided and arrested 22 girls and 25 boys at a farmhouse near the capital’s Bhara Kahu area for allegedly having a dance party with alcohol present.

The arrest took place on at around 7:30 in the morning on Saturday 28, April 2018, where over 40 people were said to be involved in obscene and suspicious activities.

During the raid, bottles of alcohol were also seized by the police.

According to the Express Tribune, a video shows some of the women who were arrested complaining of having injuries due to being manhandled by police during the raid at the farmhouse in Phulgran village on Simly Dam Road, near Bhara Kahu. The property is said to belong to Mr Raja Kamran.

The initial police report related to the raid and arrest stated that the occupants found at the premises were involved in activities of a vulgar and suspicious nature.

Regarding the claims made by the women, police said that because some of the suspects were misbehaving with the officials and resisting arrest, some of them did sustain some minor injuries.

The police stated that they segregated the men and women. They locked up the men but the women were to be detained at the police station or admitted to judicial custody if they were not bailed. 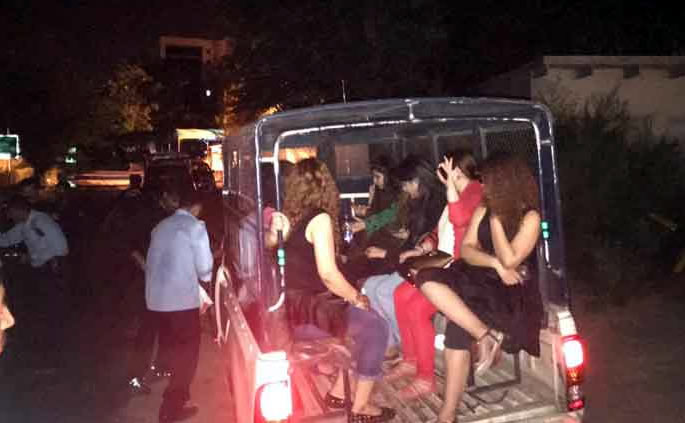 A similar case of arrests took place at an Islamabad hotel in the G-5 area on July 2, 2017.

Police raided a party at the hotel at which many women and men were dancing and playing music loud. They were also smoking sheesha and tobacco too.

About 34 men and 16 women were booked by the police in the early hours of the morning for “obscene acts and songs” and violating amplified noise and tobacco control laws.

The hotel manager and owner were also arrested for abetting.

However, in this case, all of them were bailed and released a few hours later by a magistrate.

In May 2017, a dance party in Lahore’s Sozo Water Park with over 2,000 people attending was halted by police and administration officials.

Whilst alcohol is prohibited in Pakistan for Muslims, non-Muslims can obtain alcohol with a special permit. Therefore, if you are not a non-Muslim and get caught it is a criminal offence.

However, it is well known that alcohol is bought and consumed illegally for parties of this kind and those that do drink despite the prohibition.

In fact, there is an outlet called Murree Brewery which makes alcohol available at hotels in specific cities like Islamabad, Lahore, Faisalabad and Rawalpindi.

Hence, these cases are bound not to be the last of such ‘social vices’ being stopped by police officials in Pakistan.

Nazhat is an ambitious 'Desi' woman with interests in news and lifestyle. As a writer with a determined journalistic flair, she firmly believes in the motto "an investment in knowledge pays the best interest," by Benjamin Franklin.
Atual Mustafa jailed for Life for Murdering Sohbia Khan
Married Dad jailed for Meeting a ‘Girl aged 14’ Groomed for Sex