Man claims Asylum in Wales over Murder Fears due to Sexuality

A Pakistani man claimed asylum in Wales over fears he could be killed or imprisoned in his home country due to his sexuality.

"both countries are very much anti-LGBT+."

Numair Masud claimed asylum in Wales over fears he could be killed in his home country of Pakistan due to his sexuality.

In 2010, Numair obtained a Visa to study zoology at Bristol University.

While studying for his PhD in Cardiff, Numair fell in love with a man who eventually became his partner.

However, he risked facing mob attacks in the streets of Karachi as well as imprisonment. He also said he feared he could be killed if he returned to Pakistan.

Numair claimed asylum in the UK at the age of 26.

At 30, he has completed a bachelor’s degree, master’s degree, and a PhD in biosciences, and is currently a research scientist at Cardiff University.

Numair explained: “It was very much in that moment when I fell in love with my ex-partner.

“The only way we could pursue a relationship, unfortunately, is if I had the right to stay in a country that accepted it.

“He came from Nigeria, I came from Pakistan, and both countries are very much anti-LGBT+.

“I was aware of what it was coming from a country which is very traditional and very religious, it’s the Islamic Republic of Pakistan.

“And what that means is that, at least according to scripture, being homosexual, being someone who has same-sex interactions is very much anti-Islamic.

“As the youngest Abrahamic religion, about 1,400 years old, it’s the most aggressive when it comes to it.

“And I can say that probably because that’s just a fact, it’s a controversial statement, we have to say it, we have to state them as they are.

“According to the Pakistani penal code, you can be sent to jail.

“And if you succumb to mob mentality far worse, I mean, frankly, I’d much rather spend my life in jail with the opportunity of escape than be beaten to death by a mob.”

Numair still speaks to his parents back in Pakistan. He said their views are difficult to change due to their beliefs.

But on the criticism he may get for being openly gay, he responded:

“I always remind them [my parents] you’re older than me, but I’ve been me longer than you have.

“If you feel like your opinion is more important than mine, especially about our subjective experience like love, or partnership, then you automatically made a fundamental error in assuming that your worldview is better than mine.

“I always tell them respect is earned. It’s not a given, it doesn’t happen automatically.

“The fact that I came out of your womb doesn’t automatically mean you get respect. I do have these very frank conversations with them.”

He stated that his story has similarities with those of other asylum seekers that have made the UK their home.

“I recently completed my PhD. My research is about infectious diseases in animals.

“So I’m a scientist at heart. I’m also an LGBT+ activist. But that’s pretty much a part-time thing.

“You know, I’m very much a full-time scientist, but a part-time activist.”

Numair and a friend founded Glitter Cymru in 2016 after they spotted a lack of spaces for LGBT+ ethnic minorities. 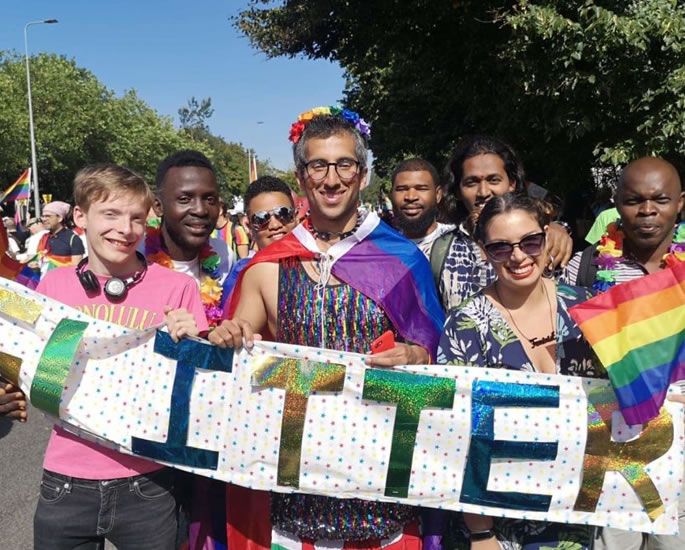 Using his own experiences, Numair said it is important to deconstruct the term that may hold a stereotypical image in people’s minds.

He said: “An immigrant is really someone who just moves from one country to another.

“And then of course, the next logical question is, why does someone move from one country to another? And really, it could be for a number of reasons.

“If we believe we live in a free world, which I’d like to believe most decent human beings believe, in that is we have the rights to move.

“The first time I came here was educational opportunities. I came to do my bachelor’s in zoology, and then subsequently, my research masters and then my PhD in biosciences.

“And it was really during my PhD that I decided to claim asylum.

“So really, for me, the first ingress in the into the UK as an immigrant was as an educational immigrant, but very much a cultural immigrant as well, because I had travelled to the UK before, not as a student, but just as a child, because we have family here in the UK.

“So I was quite lucky to be able to experience UK culture.”

Typically, refugees are often depicted in the media as a group of individuals travelling from far places.

However, Numair believes it is important to note that refugees have different stories to tell.

He continued: “You think of a victim, you think of someone washed along the shores, coming to the coastline of the UK in a dingy.

“That’s the image we have because it’s the image of the media has portrayed. And that’s something we need to challenge.

“The endeavour of being human is to learn, is to adapt, is to seek out opportunities wherever you are, to live your best life.

“But really the value of what it is to be human is to want to love and be loved and to be accepted, seek out opportunities, and that’s no different no matter where you are or who you are.

“And that’s my story. It’s a very human story.

“And it’s important that people realise that it’s no different from anyone else’s story, whether or not they’re a refugee.

On the future, Numair wants people to understand that refugees come from all “shapes, sizes and experiences”.

He added: “If everyone was born and bred in the UK, you would still have a diversity of experiences.

“Why would that principle be any different if you’re an immigrant?”

“Fundamentally what I would want people to know is what do you want as a human being?

“What you want is the same things that a refugee would want, or an asylum seeker would want which is the idea of wanting to be accepted and understood.

“If you just remove that label, it’s just being human. And if you cannot see the humanity that is the thing that should scare you.”

Dhiren is a journalism graduate with a passion for gaming, watching films and sports. He also enjoys cooking from time to time. His motto is to “Live life one day at a time.”
Man attacked Transgender Woman during Sexual Encounter
Imran Khan slammed after Blaming Women for Sexual Violence