Lady Teacher Cuts off Hair of Students in Pakistan

A lady teacher, from Chiniot, has been accused of cutting off the hair of her students in Pakistan as a method of punishment.

the teacher locked the pupils in a room after cutting their hair.

A lady teacher from Chiniot allegedly cut off the hair of her students for failing to understand one of her lessons.

The incident is said to have taken place at the Government Girls Elementary School in Punjab, Pakistan.

It was reported that the students had failed to learn the science lesson that was set and this enraged the unnamed female teacher.

She took a pair of scissors and allegedly cut their hair off before locking them in a dark room.

The parents of the pupils found out about the incident and went to the Elementary school. They found the girls in the locked room and managed to let them out.

They have informed the police and alleged that the teacher locked the pupils in a room after cutting their hair.

Furthermore, the children’s parents have submitted an application to the Chiniot Deputy Commissioner and are demanding action to be taken against the accused. 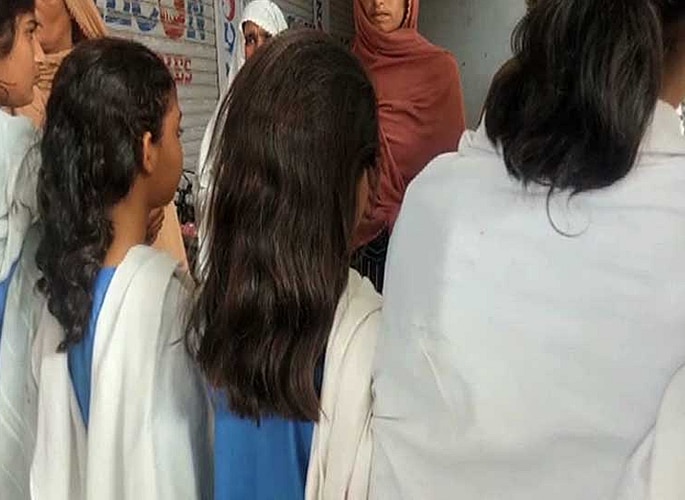 While this was an extreme action that the teacher took when the students did not learn her science lesson, cutting hair off as a form of punishment seems to be common in Pakistan.

It is looked at as a way of humiliating the victim and there have been several cases over the course of 2019 where it has happened.

One case involved a Pakistani transgender from Karachi who was found stabbed to death at her flat. She also had her hair cut off.

Shabana Khan, aged 35, was found with multiple stab wounds all over her body, however, the stabbing only left her seriously injured.

The attacker had locked her in a room which caused her to bleed to death.

Police officers explained that Shabana’s hair was cut off before the murder and believed that it was done to insult the victim.

Another high-profile incident took place in Lahore. A woman had her hair shaved off and was stripped naked by her husband.

The victim, Asma Aziz explained that her husband Faisal and one of his friends beat her in front of his employees after she refused to dance for their entertainment.

She explained her ordeal in a video which received widespread attention and prompted a number of ministers to take action.

Asma claimed that her husband had “always hit her a lot”.

She then spoke about her humiliating ordeal at the hands of Faisal, she said:

“He has always beaten me but this time he even shaved my hair off and hit me on the head with a manhole cover.”

“The employees held me down while he shaved off and burned my hair. My clothes were all bloody.

“I was tied with a pipe and he threatened to hang me naked from a fan.”

Faisal and one of his friends were arrested. However, not all victims are given justice.

Cutting hair as a form of punishment is one which can affect a victim mentally as well as the physical harm that they are subjected to.

Dhiren is a journalism graduate with a passion for gaming, watching films and sports. He also enjoys cooking from time to time. His motto is to “Live life one day at a time.”
Zia Rafiq jailed for Terrifying Robbery with Axe
Singer Nazia Iqbal pressured to Pardon Brother for Sexual Abuse