Bollywood actor Kartik Aaryan was recently offered Rs 1 lakh (£1,062.52) from a fan on Instagram. But what was he asked to do in exchange for the money?

Bollywood actor Kartik Aaryan responded to a fan who offered him Rs 1 lakh (£1,062.52) if he replied to her messages on one of his Instagram posts.

Kartik Aaryan shared a picture of himself on Instagram and his loyal fan following immediately commented on his photo. He captioned it:

“Jesse, you asked me if I was in the meth business, or the money business… Neither. I’m in the empire business.”

Yet, it was one reply in particular which stood out to the actor. Memer_._queen took to the comment section to say: 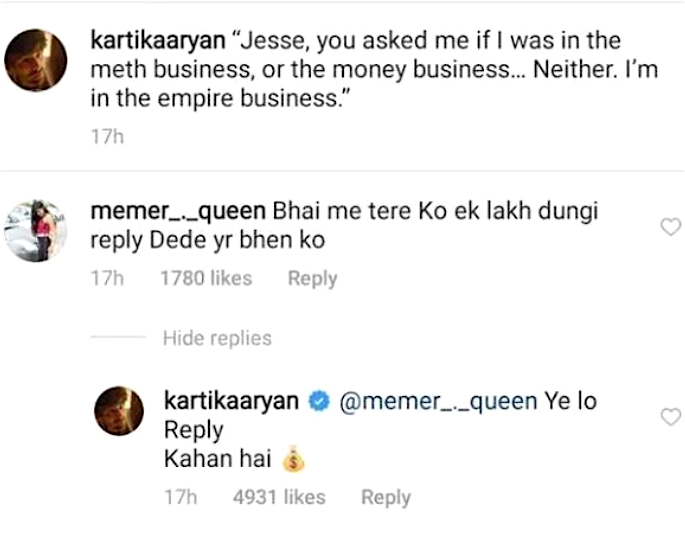 The hilarious exchange caused fans to offer Kartik money, love and prayers in exchange for a reply.

One user said: “reply me I’ll give you chocolate”. Another fan offered to give Kartik Rs 10 crore if he marries her. She said:

“Wow, so you’re replying to her imma give you 10 million marry me.”

However, some fans mocked the user who initially asked Kartik for a reply in exchange for money.

One user suggested, memer_._queen could have asked for love. The user said:

Unfortunately, the film received a mediocre response at the box office as it failed to strike a chord with audiences. 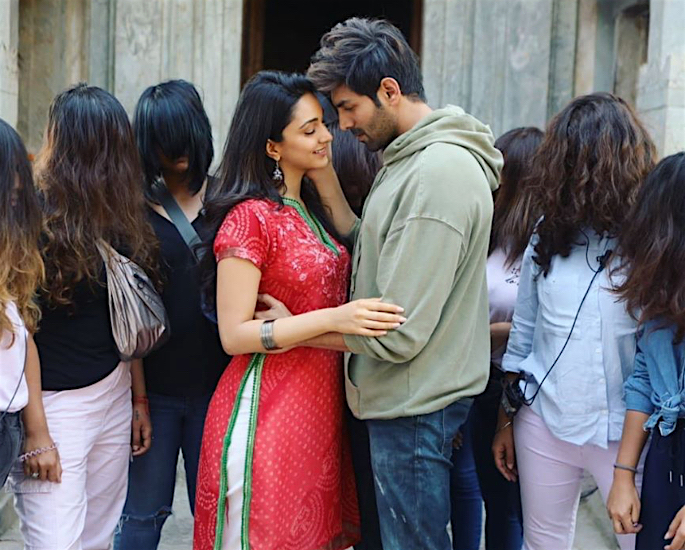 Meanwhile, Kartik is currently filming for his upcoming film Bhool Bhulaiyya 2 (2020) which is the sequel to the 2007 namesake film.

Kartik Aaryan and Kiara Advani will be stepping into the shoes of Akshay Kumar and Vidya Balan as they take on the lead roles.

The psychological thriller film is directed by Anees Bazmee and is scheduled to release on July 31, 2020.

Kartik is also busy with another sequel in the pipeline. He is set to star in Karan Johar’s Dostana 2 opposite Janhvi Kapoor.

There is no doubt it is a delight to see fans and stars interacting with each other. We wonder whether Kartik has received his Rs 1 lakh (£1,062.52).

Ayesha is an English graduate with an aesthetic eye. Her fascination lies in sports, fashion and beauty. Also, she does not shy away from controversial subjects. Her motto is: “no two days are the same, that is what makes life worth living.”
Deepika Padukone’s Doll gets Reaction from Fans
Sara Ali Khan reacts to Saif’s ‘Absentee Father’ claim