Kangana Ranaut’s look as the Rani of Jhansi has leaked onto the internet. Wearing regal clothing, she films scenes for her upcoming flick.

In some images, Kangana even poses with a strikingly huge sword.

Anticipation is building up over Kangana Ranaut’s upcoming film Manikarnika: The Queen of Jhansi. She will feature as the warrior Rani Laxmi Bai.

New images have surfaced of her look as the powerful, historical figure. Instagram fan accounts of the actress shared the photos on 31st October 2017. In a matter of hours, they turned viral as they revealed Kangana’s incredible appearance.

While she currently films scenes for the movie, Bollywood fans now have a taste of what to expect. It seems we’re in for plenty of excitement and intrigue, judging by the royal look.

The viral images show Kangana taking centre stage as she wore a regal, cream and gold costume. With elegant, flowing sleeves and gold accessories placed around her waist, she truly appeared as an impressive figure.

At times, she donned a golden shawl over her magnificent dress. Around her neck, the actress wore exquisite jewellery such as a dramatic necklace and bejewelled earrings. Kangana also wore a gold turban, decorated with more jewels. 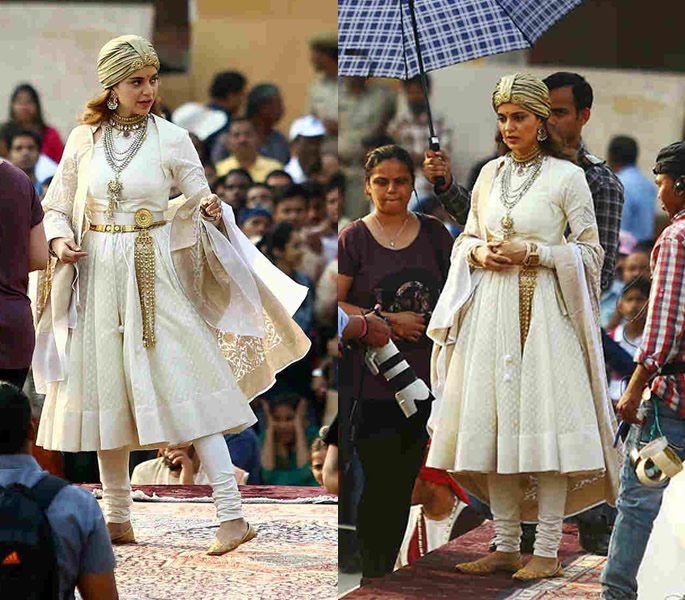 In some images, Kangana even poses with a strikingly huge sword, placed in a red and gold scabbard. With a decorative handle, it looks absolutely fitting for the actress as the historical warrior Queen.

However, the images reveal very little action, of which we can expect for the film. Instead, they show Kangana arriving at her throne, with subjects watching and bowing to her in the background. 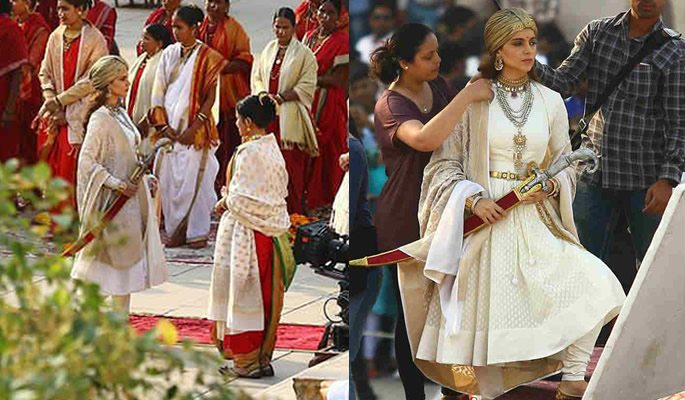 We wonder if this sword will be the weapon she uses in the film. Back in July 2017, she suffered a head injury following a sword-fighting rehearsal. Receiving 15 stitches on her forehead, doctors revealed it could leave a scar on the actress.

After the incident, she told press: “It’s a bit dramatic but I am excited that my face was covered in blood and I got a genuine and authentic glimpse of the Queen’s life.”

However, fans will have to wait quite a while before they see Kangana’s look or sword-fighting up close. With producers planning for a release in April 2018, Manikarnika: The Queen of Jhansi will explore the enthralling life of Rani Laxmi Bai.

A figure who played a crucial role in the 1857 Indian Rebellion, she remains highly remembered for her bravery and leadership during this time.

A truly exciting role for Kangana, we can’t wait to see the starlet as the warrior Queen in action!