Kangana Ranaut is ruling once again as she plays a female outlaw in the black comedy, Revolver Rani. Directed by Sai Kabir, this is a film where fear and humour mix with politics.

"Nobody is going to marry me after watching this film; I can give it to you in writing."

Set in a world where there are no friends only enemies, Revolver Rani is an unusual love story where female outlaw and political party leader, Alka Singh (played by Kangana Ranaut) falls madly in love with budding actor, Rohan Mehra (played by Vir Das).

Alka’s political reign is at stake when her lover Rohan is kidnapped by her enemies. Will she sacrifice her love to save her career and life?

The story portrays what could happen if a political leader falls in love with a Bollywood star. The black comedy builds up a unique highlight of the deadly outlaw who can also fall in love too. 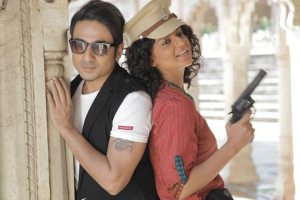 Speaking about the unique film, actor Vir Das says: “It was a very tough film to do as it has all elements like violence, intimacy and humour. It is both a love story and an anti-love story. Since the shoot was difficult for all of us (Kangana, Piyush and me), we had to give each other a lot of space,” Vir said.

“I enjoyed the role as I was asked to play a bad actor, very loud who doesn’t know how to act yet wants to become a superstar. I had to be over-the-top with my acting. With this movie, I did all things filmy, which I shun in real life,” he adds.

Talented actress Kangana will be seen playing a bold role in the film: “Nobody is going to marry me after watching this film; I can give it to you in writing,” she insists. 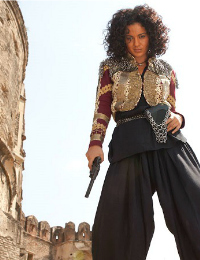 Kangana has really excelled in the strong female characters that she has played, and Queen, released earlier in 2014 sought great reviews from Indian film critics. She will be showing a new avatar of herself as a don in the set of Chambala, a rebel area where politics and guns fit in well together.

Kangana however mentions that she did want Queen and Revolver Rani to have a four month gap between them: “If I could have my way, then I would like to give a gap for four months between both the films. We were not expecting that Queen will be running even now,” she says.

“People have accepted my performance in Queen and I personally like my character in the film. I hope when people go to watch Revolver Rani, they accept me in the same way.”

The film has already had a few issues in post-production, causing the release date to be delayed. Due to financial problems, film editor Shah Mohammed walked out of the project in February 2014. This caused the film to be postponed from the April 11 to the 25th. He admitted that he was not getting paid enough for editing the film.

It is reported that the issue is trying to be resolved with Shah who isn’t going to settle for anything less than what was discussed in his salary. To replace Shah, Aarti Bajaj was recruited to edit the film in time. 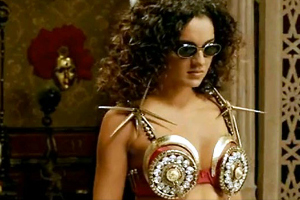 But apart from these few glitches, the rest is business as usual. Music director, Sanjeev Srivastava has composed a variety of songs for the film and even has his own rock track where he sings, ‘I am Brutal’.

The title track ‘Revolver Rani’ is sung by Usha Uthup who uses her vocals to express the retro feel of the music and to suit the character played by Kangana.

Sanjeev has managed to create other retro style songs for the film, such as, ‘Zardozi Lamhe’, and ‘We Mix You Michael Jackson’ made as a tribute to the late King of Pop and sung by Salem Javed. The legendary Asha Bhosle lifts the romantic mood to another level with the song ‘Kaafi Nahi Chaand’.

After the huge success of Queen, Revolver Rani has a high expectation for its first day Box Office earnings. With Kangana’s fans eagerly waiting to watch her next movie in her new don style role, it is estimated that Revolver Rani may be able to earn Rs 10-12 Crore (£100 million) in the first day.

As Revolver Rani is all set to show some action, fans will have a chance to see Kangana in her don role fighting to save her love in this unusual black comedy. Get ready to not miss the female outlaw, as she will be coming to the screens as Revolver Rani from April 25th.

Nadeera is a model/dancer hoping to take her talents further in life. She likes to carry her dance talent in charity functions and is passionate about writing and presenting. Her life motto is: "Live life over the top!"
Gippy Grewal is Jatt James Bond
IIFA Rocks amazes the Tampa crowd