Kangana Ranaut shared glimpses of her dramatic transformation for her role in the upcoming biopic ‘Thalaivi’.

"Gaining 20 kgs and losing it all back"

Kangana Ranaut’s upcoming film Thalaivi is set to release its first trailer and the actress revealed her dramatic body transformation for the film.

The trailer will release on March 23, 2021, which coincides with Kangana’s 34th birthday.

Although Kangana has previously spoken about the dramatic weight changes she underwent during the making of the film, she shared glimpses of what fans can expect.

In the photos, Kangana is seen in a pair of yellow shorts and a floral top. In another, she looks completely different in a golden ensemble for a dance number.

The third photo looks to be from a time when Jayalalithaa was a politician.

“Gaining 20 kgs and losing it all back within a span of few months wasn’t the only challenge that I faced while filming this epic biopic, wait is getting over just in few hours Jaya will be your forever.”

Kangana had previously stated that the dramatic weight gain left her back “severely damaged”.

However, she went on to say that the “moment of despair” was worth it after she saw how the film shaped up.

In February 2021, Kangana said she underwent a “massive transformation alert” and spoke about the kind of range she has displayed as a performer in Thalaivi.

She compared herself to the likes of Hollywood stars Meryl Streep and Gal Gadot. 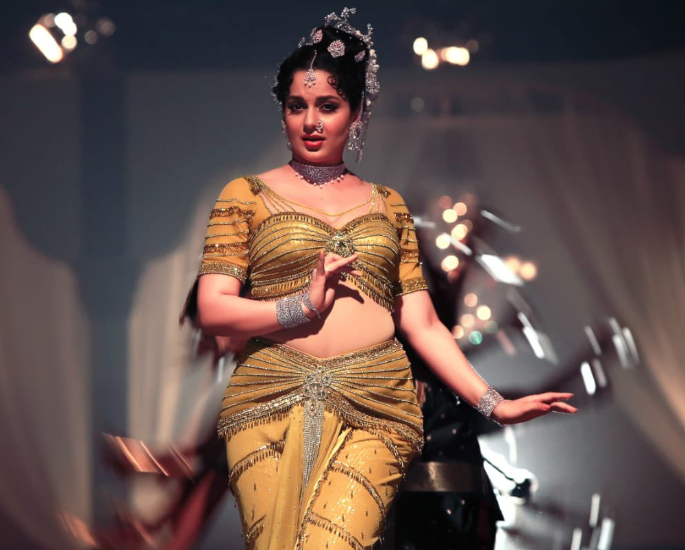 Thalaivi is directed by AL Vijay and earlier in March 2021, Kangana was all praise for him. She had said:

“You are not only amazingly competent, your eyes shine brighter when I excel as an artist.

“Through so many ups and downs, I never saw a hint of anger, insecurity or despair in you.

“Spoke to people who know you for decades and when they speak about you their eyes light up. You are not a human, you are a devta.

“I want to thank you from the bottom of my heart and know that I miss you.”

Thalaivi follows the life of former Tamil Nadu Chief Minister J Jayalalithaa. Before becoming a politician, she was part of the Tamil film industry.

Thalaivi was originally scheduled to release on June 26, 2020, however, it was delayed due to the Covid-19 pandemic.

Dhiren is a journalism graduate with a passion for gaming, watching films and sports. He also enjoys cooking from time to time. His motto is to “Live life one day at a time.”
Priyanka Chopra reveals Director told her to Strip to Underwear
Ram Gopal Varma reveals decision not to work with Ajay Devgn