Canadian Prime Minister Justin Trudeau met up with Bollywood royalty during his week-long trip to India. He spoke with the likes of Aamir Khan, Farhan Akhtar and the one and only Shahrukh Khan!

"Your relatability, grace and charm was most endearing."

Justin Trudeau, Canada’s Prime Minister, has been enjoying a week-long trip to India. However, it wouldn’t be a proper visit without a chance to meet with some of the Bollywood legends!

On 20th February 2018, the political leader rubbed shoulders with famous faces of the industry, as well as business figures.

He met with the likes of SRK, Aamir Khan, Farhan Akhtar, Madhavan and Anupam Kher.

The event, which celebrated the relationship between Canada and India, gave them the chance to discuss opportunities for the Canadian and Indian movie industries.

All the guests appeared in good spirits as Justin was introduced to the Hindi celebrities. On Twitter, the political leader revealed his happiness in attending the event and gave special thanks to Shahrukh.

Tonight, we celebrated stronger ties & new co-production opportunities between Bollywood and the Canadian Film Industry. And who better to help than @iamsrk himself… Great to meet you! ???? pic.twitter.com/1OcwsA9lMS

The actors also revealed their pleasure in speaking with the Canadian Prime Minister. Madhavan wished him well on the rest of his tour and said it was an “honour” meeting him. He added on social media:

“Your relatability, grace and charm was most endearing and its easy to see why you are the Pride and toast of Canada.”

Farhan Akhtar also expressed similar thoughts, saying on Twitter: “Sir, your leadership in the discourse for ending gender discrimination serves as constant inspiration to us all.” 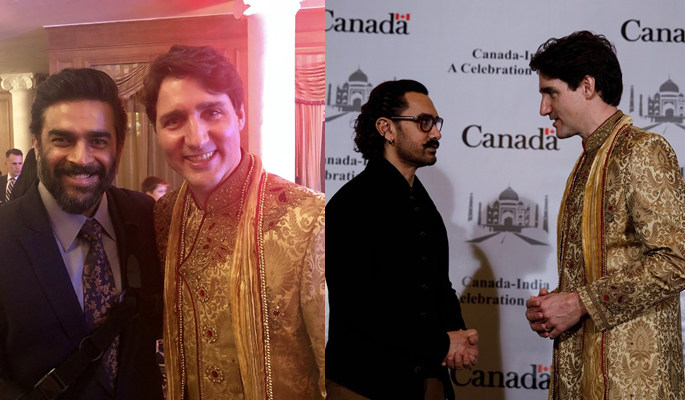 Justin appeared keen to make a great impression and turned heads with his outfit. He opted for ethnic wear, donning a gold sherwani which featured decadent detailing. His wife Sophie and their two eldest children also wore beautiful traditional garments.

While it’s great to see the political leader in ethnic attire, we can’t help but feel he overdressed for the occasion. Especially considering how the Bollywood stars kept to a subtle dress code of black suits or, in Aamir’s case, a casual ensemble.

Perhaps they even felt underdressed after seeing Justin’s outfit? Some took to social media airing their own reactions:

Is @JustinTrudeau on an official visit or is he preparing for the Lakme Fashion Week?

I love how extra @JustinTrudeau is! Like he was on his way to his own wedding or something. pic.twitter.com/q92wlgjLUD

The political leader began the official trip with his family on 17th February 2018. Throughout the visit, they travelled to various well-known locations across the country. These include the Sabarmati Ashram in Ahmedabad and the Swaminarayan Akshardham temple.

Their first day even witnessed them posing in front of the Taj Mahal. The family of five gave beaming smiles as Justin recounted how he first visited the landmark 35 years ago.

However, the political figure has been criticised for the trip, with some comparing it more to a “holiday” rather than a state trip. There is also the issue that he is yet to meet with India’s Prime Minister Narendra Modi.

While some deemed this as a ‘snub’, Justin said: “I have met with the Prime Minister in various places around the world and looking forward to sitting down with him on Friday.”

Now after meeting the Bollywood royalty, we’re sure the political leader will continue to enjoy the rest of his state trip to India.