Indo-Canadian singer Jonita Gandhi is a rising music star of Indian cinema. She chats to DESIblitz about her journey from singing YouTube covers in Toronto to taking Bollywood by storm.

"Every song I sing brings out a different part of me"

Jonita Gandhi is undoubtedly one of the most sought-after playback singers of India.

Her sweet and silky vocals lend themselves beautifully to the romantic ballads of Bollywood’s modern heroines, while her versatility allows her to delve into so many different musical genres.

Although born in New Delhi, Gandhi spent most of her life in Canada, where she grew up with a passion to sing.

It was at the age of 4-years-old that her father, noticing her enthusiasm, nourished her melodious talent and introduced her to music.

One of her first gigs was at her father’s show back in Toronto, during Christmas. In fact, she “grew up singing Indian songs in Toronto”, quickly becoming known as Toronto’s Nightingale in the Indo-Canadian community.

By the age of 17, Gandhi began collaborating with Aakash Gandhi, a prominent American pianist who runs the YouTube channel, 88keystoeuphoria. Alongside flute-player Sahil Khan, they began creating beautiful renditions of popular Bollywood songs. Some of their songs that gained popularity were ‘Pani Da Rang’ and ‘Galliyan’.

At the time, Gandhi’s parents were adamant that she completed her studies before embarking on a musical career, and she studied Health Science and Business.

But with her YouTube fame picking up, soon after graduating, she was noticed by top Indian playback singer Sonu Nigam, who invited her to tour with him.

Eventually, her big Bollywood break came in India after being introduced to Vishal of the composer duo, Vishal-Shekhar. He asked her to sing on the title track of Shahrukh Khan and Deepika Padukone starrer, Chennai Express.

Since then she has sung for films like Dangal, Highway, Ae Dil Hai Mushkil, Jab Harry Met Sejal, Padman, Race 3 and even the Pakistani film, Rangreza.

In a special interview with DESIblitz, Jonita chats about her incredible journey from singing YouTube covers to the world of Bollywood, and how her western background has influenced her singing. 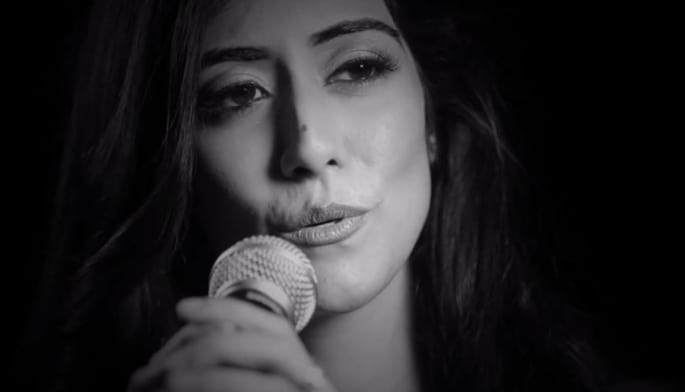 Was singing something you always wanted to do?

It was, but I just didn’t expect that I will be able to do it full time. I knew I would be singing for the rest of my life, but to what capacity that I wasn’t sure.

So at the back of my mind, I had to get my degree. My parents were like, ‘Make sure you have a career to fall back on in case music doesn’t work out’.

So I made sure I got my degrees and then I went for it.

And I thought, worst case I’ll go back to Canada and I’ll apply for a job that’s nothing to do with singing but at least on weekends and evenings I’ll be singing!

How did you begin collaborating with Aakash Gandhi on YouTube?

Aakash was someone who I just would follow online already.

And while I was studying for University exams, I remember my friends put me onto his channel and I ended up hearing his instrumentals and I loved what he was doing.

I just shared my link, and then we started reconnecting on social media and that’s how the collaboration idea came up, we thought we’d do a cover together and that’s what we did.

How did you feel doing that?

It was awesome! Obviously, I hadn’t met him before and spoken to him, I only spoke to him on Facebook. But I knew his music really well and I thought it was great, and he really liked the stuff I was doing on my channel.

So he ended up recording the piano for a song. He just sent me the piano track and I recorded my vocals on top in Toronto, at my house, sent it back and then we all shot our individual videos.

He had someone edit it all together, and put it out onto his channel.

We ended up doing more after that because the response was so awesome and we’re like people liked it, maybe we should do a few more. So we were really happy. 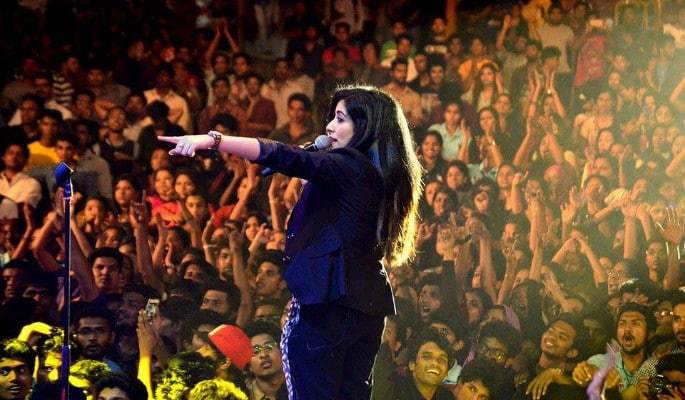 How did you get your big break into Bollywood?

I went on tour with Sonu Nigam right after I graduated from University.

It was a confidence booster for me and convinced me that I should come to India and try out the scene and just see what’s happening here.

So, I came to India thinking I’d take a year off school. And I just started meeting people. And one person who I met was actually a friend of a friend of mine who I already was in touch with online, working for Vishal-Shekhar at the time.

So he told me to come drop by and meet him in the studio. And I just happened to pop in at a time that Vishal was working on a song that required female vocals. And all of sudden he’s like, actually we need to add some female vocals and since you’re here why don’t you try it out.

I think I was just kinda in the right place at the right time.

After this, how was your experience working with A.R. Rahman?

That was again through YouTube, he discovered my videos on YouTube and tweeted about one of them.

Our own Hayley Westenra….Do check out Jonita Gandhi's 'Silent Night'

So, I got a text from his secretary saying, ‘Are you available for recording in Chennai?’ and I was so excited.

I remember I freaked out when I found out that A.R. Rahman tweeted about me! I was in disbelief throughout [laughs].

I went there, sang some 4 to 5 songs over a span of a week. And then came back to Bombay and slowly these songs started releasing one after the other over the next year or two. 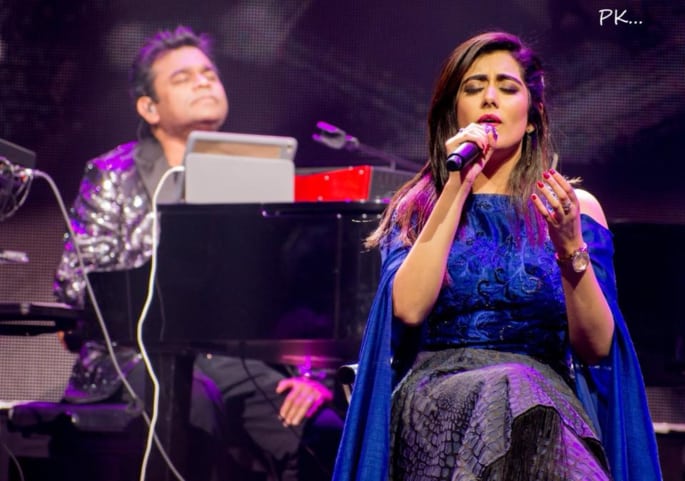 How did you get your first gig in Clinton Cerejo’s Coke studio, alongside Sanam Puri?

That was again, he had seen me and Sanam had done a cover of ‘Tum Hi Ho’ together. Clinton actually had already worked with Sanam a few times prior to that, so he knew who he was.

And when he saw this video, he saw him with me and he heard our voices together and I think he really liked how that sounded.

So he wanted to put us together again in a song for this Coke studio episode where we’ll be singing together, harmonising with each other and just blending our vocals.

One of your dreams is to be versatile, what else is your dream as a female singer?

First, I wanted to sing for movies, I’m doing that. Now, I think I’m going to focus on doing some original work as well and doing some non-Bollywood work.

Maybe exploring English songs more and writing my own music. It’s a slow and steady process.

How comfortable were you singing in India coming from a Western background?

It was very comfortable for me.

But I think once I came to India then I realised the benefits of having grown up in an atmosphere where I was exposed to Indian music, but also Western music.

“When I came to India I was able to in-cooperate all of that upbringing, with my pop influence, there’s R&B, as well as the influence of like the old Bollywood songs like Lata Mangeshkar songs and Asha Bhosle songs.”

And I think, fusing all that together is what gives me my identity in Bollywood. 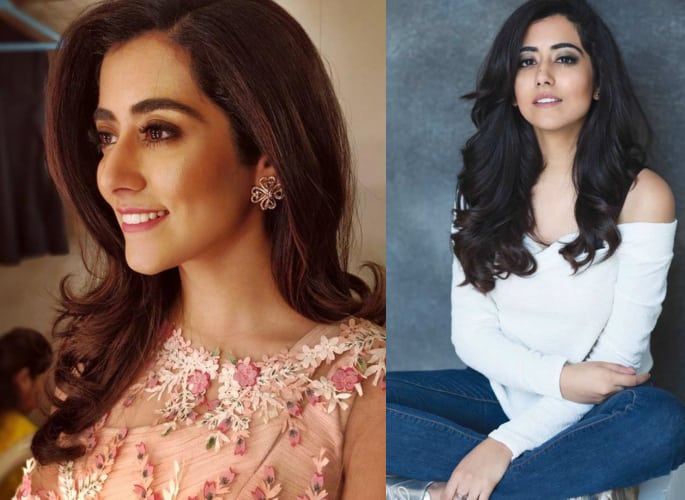 Does your personality influence a lot of your singing?

I think so, we’re all multi-talented right?

So every song I sing brings out a different part of me. ‘Breakup Song’ was more of a dramatic type, that was more like fun and funky. But then something like Highway is more introspective.

I think everyone has all these facets to their personalities that it’s fun to explore them through music.

You were on Voice of India Season 2, how did you feel being on that show?

It was my first time appearing on a reality show. So I was really really nervous. But it was fun, it was a good experience.

But the contestants were all amazing and my partner was a kid and then he was like 19, and it was so sweet that he sang for me! That was a very memorable experience [laughs].

What advice would you give to young people who are also hoping to pursue a career in music?

I think, explore all the opportunities you have. YouTube is a big help when starting out because there are no barriers to starting your own channel and recording your own videos.

You can literally just start singing to your phone like I did, and there’s an audience that will appreciate that.

And then you can work your way up to increasing your production level and working with more people, collaborating with people from across the world.

It’s all possible without even moving out of your living room. 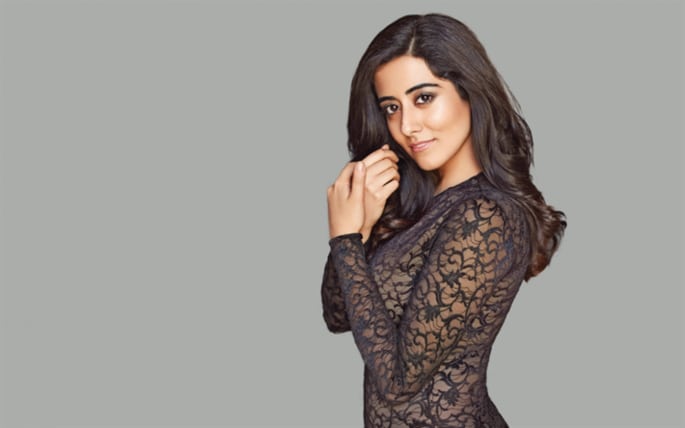 What’s next for Jonita Gandhi?

Immediate future I’m going to be doing a lot more on my YouTube channel, I’ve kinda been dormant for a while. But I’ve been doing videos very, like faced-out. I’ve been doing them every couple of months, every 3 to 4 months.

I’m hoping to do more for YouTube, because I know that’s how I started off. And there’s a lot of people who are waiting for me to come back.

[Laughs] I’m excited to get started on my channel again.

Bollywood it happens. You know I’m recording a lot. I don’t really ask too many questions, I’m not always aware of what other things are going through, or getting finalised or not.

But I do have a couple of songs coming out this year for sure, in Bollywood as well!

It is very rare to see budding singers find fame through their YouTube covers, but Jonita Gandhi’s powerhouse vocals shine through any digital screen.

In fact, Gandhi’s unique story offers inspiration to so many others who use YouTube and social media to promote their artistic and creative talents.

During the short time that she has been part of Bollywood and Indian cinema, Jonita has been responsible for the most well-loved tracks of recent years.

From the likes of ‘The Breakup Song’, ‘Yaadon Mein’, ‘Gilehriyaan’, ‘Kahaan Hoon Main’ and more recently, ‘Allah Duhai Hai’ from Race 3, Jonita is one of the most promising musical stars right now.

With so many more promising projects up her sleeve, we wish Jonita Gandhi all the best in her future musical aspirations.