India’s ‘Dancing Uncle’ aka Sanjeev Srivastava has shot to fame after posting his wedding dance videos on social media. His moves have attracted huge praise from Bollywood stars.

"Sanjeevji's dance is mind-blowing and out of the world"

Sanjeev Shrivastava aka India’s ‘Dancing Uncle’ has become a viral attraction since he released a wedding dance video on his new Twitter account on May 31, 2018, using the handle, @DabbutheDancer.

Indian electronics professor, Sanjeev Srivastava, is shocked at the reactions to his dancing clips and did not expect the fame and love he has received from viewers of his exceptional and intrinsic dance moves!

Since his first video, he has released further clips of songs he danced to at the wedding with his wife, who basically lets him get on with the ‘professional’ dancing as she supports him on the side with a few of her own moves.

In his first video, Srivastava dances to a Govinda classic, Aap Ke Aa Jaane Se, from the 1987 Bollywood film Khudgarz, which spiralled him into fame pretty quickly where his Twitter followers grew overnight, as the sharing of his tweet exploded.

The performance of 46-year-old Sanjveev’s great dancing was at his brother-in-law’s sangeet party. The video began to trend in India with the hashtag #dancinguncle.

Bollywood stars soon picked up on the viral sensation. Govinda himself highly approved of his moves and in a statement said:

“I love his moves. Sanjeevji’s dance is mind-blowing and out of the world. I hope we see more of him in the future.”

Then his third video was uploaded on June 1, 2018, showing the ‘Dancing Uncle’ dancing to the popular Bollywood track Tamma Tamma Loge recently remade for Alia Bhatt’s and Varun Dhawan’s Badrinath Ki Dulhania movie but originally from the 1991 Bollywood film Thanedaar.

Praise for him came from Bollywood star, Arjun Kapoor, who tweeted:

“I can see pure happiness on Mr #sanjeevshrivastva s face while he dances… this pure joy is what we actors & performers crave when we let loose in front of the camera, the ability to make others wanna dance just by looking at u is an acquired skill… keep the moves flowing sir.”

Srivastava also met up with actor-producer Sunil Shetty saying “was an amazing experience. Touched by his warm welcome & humble personality” 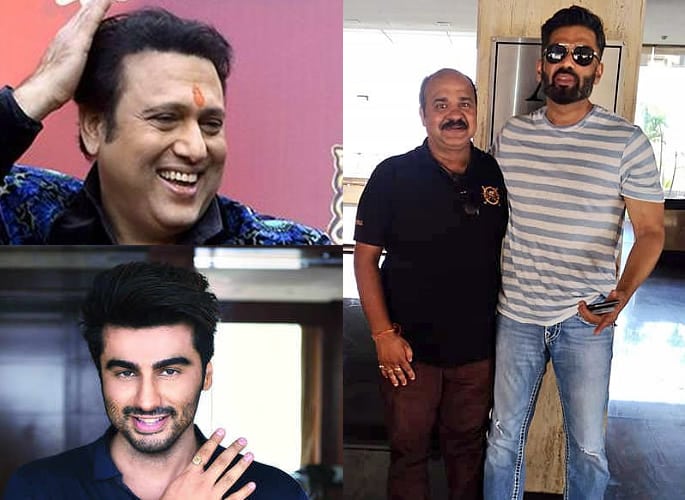 The trend of Indian girls making videos on social media with his moves in side-to-side videos has also taken off. With one dancer, Pragyan Behera, who wore Bollywood actress Anushka’s clothing line NUSH.

“As Indian as it gets. In love with the amazing moves of this #CoolUncle & #NUSH.”

“OMG! I’m legit upset I didn’t think of doing this. ?Loving your moves and your #NUSH tee ?@NushBrand”

A cartoon by Indian illustrator, animator and storyteller created by Allen Shae has also been published for the fame of the ‘Dancing Uncle’ which has caught the attention of Twiteratti too. 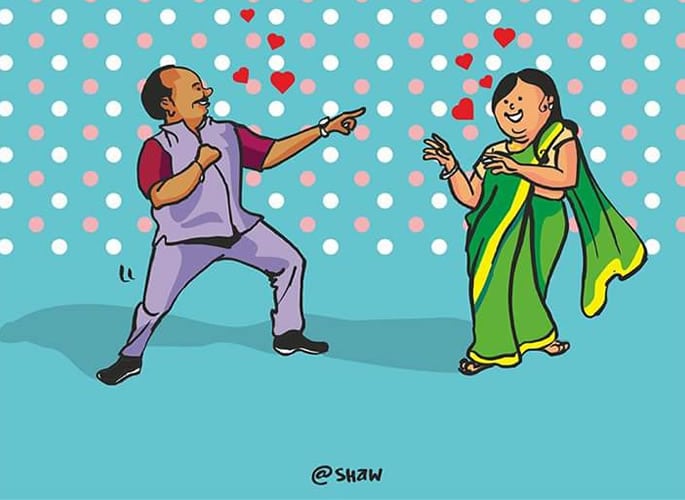 Whilst Srivastava is no dancer by any professional means, he started to dance when he was a child and at 10 years of age he participated in his first ever dancing competition.

He grew up in the central state of Madhya Pradesh and subsequently won trophies in another three dancing competitions for his incredible dance moves.

Since all the attention on social media Srivastava has appeared on numerous Indian television news channels where he has emulated the moves and become a joyful form of entertainment for everyone watching.

We wonder what is next for the ‘Dancing Uncle’? A Bollywood role perhaps?

Nazhat is an ambitious 'Desi' woman with interests in news and lifestyle. As a writer with a determined journalistic flair, she firmly believes in the motto "an investment in knowledge pays the best interest," by Benjamin Franklin.
Jonita Gandhi: From YouTube Covers to Bollywood Playback Singer
10 Bollywood Wet Saree Songs which Blow Your Mind