Young Punjabi singer, Navjot Singh has been found shot dead in Dera Bassi close to Chandigarh. Police are investigating motive and are probing the possible involvement of a woman.

"A murder case under Section 302 of the Indian Penal Code has been registered."

Upcoming Punjabi singer, Navjot Singh, who was 22 years-old, was found shot dead in Dera Bassi near Chandigarh. His body had five bullet wounds which doctors say were shot at close range.

He was found on late Sunday night, May 27, 2018, near Rampur Sanian village in Dera Bassi with his body lying in a pool of blood near a vacant plot of land next to a factory.

Navjot’s Micra car was found along the roadside about 50 metres away with the ignition still on and the back door open.

Three 0.9mm cartridges and two live cartridges were recovered by police from near the body.

The postmortem examination by a panel of three doctors revealed in their report that Navjot had five “entry and exit” bullet wounds around his chest area with no bullets recovered from his body.

In addition, the report stated there were no external marks on his body indicating there was no physical violence or assault against him before shooting him.

The budding singer who sang the Punjabi songs “Girls Need Cash” and “Jatt Karda Reha” was shot around 11.30pm that night while he was on his way back home to Behra village, according to police.

Navjot Singh’s father, Sukhdev Singh, a farmer, said that Navjot had left to see a friend in Panchkula at about 4pm on that Sunday. He told them he would be back soon.

The later that night, he called his mother at 11.15pm asking her what she had cooked for dinner and that he had reached Dera Bassi and would be home in about five minutes.

However, Navjot did not arrive which sparked worry and concern in his parents. His father said:

“When he did not return, we called him repeatedly and then started looking for him.”

The family assisted by a few fellow villagers launched a search for Navjot. They then found his car and then the body with the gunshot wounds surrounded by blood near the village.

The local police were immediately informed of the incident.

Harman Hans, Assistant Superintendent of Police, Dera Bassi, and SHO Mohinder Singh, along with the CIA wing of Mohali, appeared at the spot of the crime after learning about the incident.

A cousin of Navjot stated that he saw Navjot near a McDonald’s in his car going along the Ambala road in Zirakpur that evening. He said he was accompanied in his car by a girl who was sitting next to him.

This has raised speculation of a possible love angle associated with the killing and murder of the young singer.

“A murder case under Section 302 of the Indian Penal Code has been registered.”

The family in shock say that Navjot had no issues with anyone and cannot believe he has been murdered in this way.

The reason behind the murder is not known yet, according to the officials.

They have ruled out theft because Navjot’s personal belongings were still on his body including a gold chain, a bracelet (kada), his wallet, ATM cards and cash were all found intact. The police also recovered his Apple phone from his pocket. 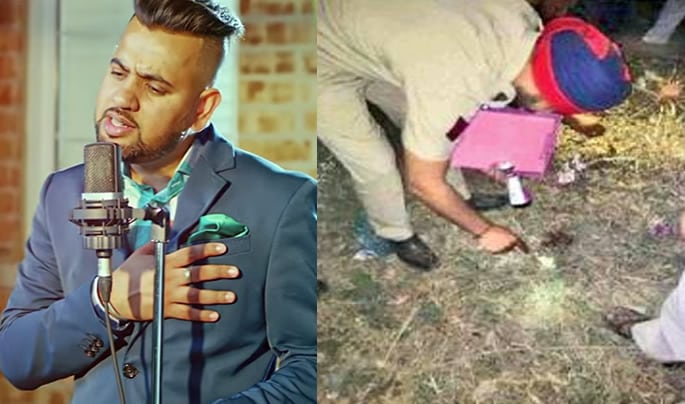 Extortion has also been ruled out because Navjot Singh’s career was in its early days and he was struggling to make a mark yet.

The police are checking the CCTV footage as part of the investigation into the murder of Navjot Singh.

“We are probing various angles, including the involvement of a woman.”

“We are yet to ascertain the motive but initial investigations point towards personal reasons. We are quizzing five people who had met the victim on Sunday evening.”

Navjot Singh wanted to be a Punjabi singer. He left his studies to pursue this dream.

In the industry, for about four years he made contacts, visited studios and took whatever opportunities that came his way including writing lyrics for songs. His vocals appear on “Kali Maserati” and “Teri Soch”. His debut album, “Wakhra Jatt”, was due to be released soon.

He leaves behind his parents and a sister who is married and lives in Fatehgarh Sahib.

Amit enjoys creative challenges and uses writing as a tool for revelation. He has major interest in news, current affairs, trends and cinema. He likes the quote: "Nothing in fine print is ever good news."
Star Plus Serial Title Songs We’ll Always Love
Jonita Gandhi: From YouTube Covers to Bollywood Playback Singer