Scottish national Jagtar Singh Johal, who is detained in an Indian prison, has alleged that he was tortured and forced to sign blank papers.

"Multiple shocks were given each day."

Jagtar Singh Johal, who has been held in an Indian prison without conviction for three years, has claimed that he was tortured into signing a blank confession.

The 33-year-old from Dumbarton had travelled to India for his wedding in October 2017.

Two weeks after his marriage, he was out shopping with his new wife in Punjab when he was taken away by police.

Mr Johal is being held under the anti-terror laws, accused of conspiring to murder a number of right-wing Hindu leaders.

They are concerned that the charges against Mr Johal carry the death penalty.

In a statement, the group said: “Reprieve is concerned that the risk of Jagtar being sentenced to death and executed is high given the politicised nature of this case.”

Through his lawyer, Mr Johal has told the BBC that he has been “falsely implicated”.

During a virtual prison meeting, Mr Johal alleged that he was physically tortured into signing a blank confession and forced to record a video which was broadcast on Indian TV.

He said via his lawyer: “They made me sign blank pieces of paper and asked me to say certain lines in front of a camera under fear of extreme torture.”

A handwritten letter which details the methods of torture shortly after his arrest in 2017 was also shared.

The letter said: “Electric shocks were administered by placing (the) crocodile clips on my earlobe’s, nipples and private parts.

“Multiple shocks were given each day.

“Two people would stretch my legs, another person would slap and strike me from behind, and the shocks were given by the seated officers.

“At some stages, I was left unable to walk and had to be carried out of the interrogation room.”

The Indian authorities deny the claims, saying “there is no evidence of mistreatment or torture as alleged”.

Mr Johal’s lawyer, Jaspal Singh Manjphur, expressed his concern over the length of time it was taking for the case to progress.

Mr Manjphur said: “He has been in custody for over three years.

“Normally, if the prosecution wants, they can complete the case in that much time.”

Jagtar Singh Johal is detained in Delhi’s Tihar jail and claims he is often forced to stay in solitary confinement and is denied the same facilities as other prisoners.

“By making me stay in these conditions, they are ensuring that my mental condition remains disturbed.”

“It is very tough to live here.”

His brother, Gurpreet Singh Johal, said Mr Johal was a peaceful activist and believes he was arrested because he had written about historical human rights violations against Sikhs in India. 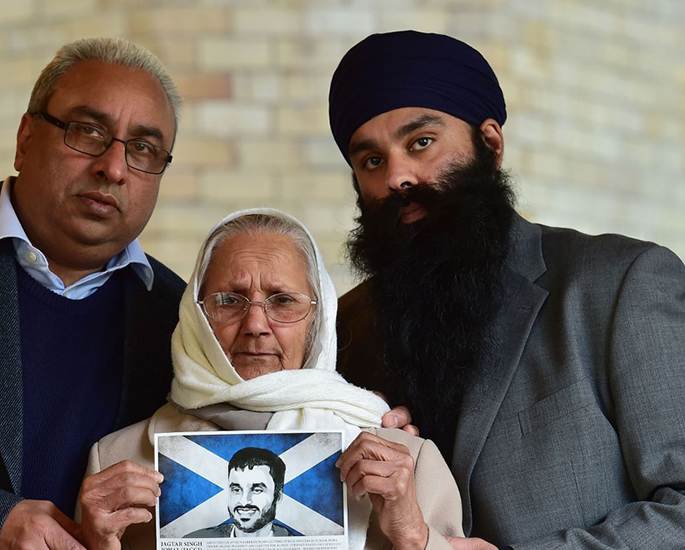 Gurpreet said: “I believe my brother is being targeted because he was outspoken.

“I believe he is innocent and will be proved innocent once the trial starts.

“Otherwise Indian officials should release him and return him back to his country.”

According to the Indian authorities, Mr Johal and a group of men are accused of being involved in a “series of killings” of Hindu leaders.

It is alleged that Mr Johal was a member of the Khalistan Liberation Front (KLF), described in the documents as a “terrorist gang”.

He allegedly paid £3,000 to fund the crimes and “actively participated and had complete knowledge of the conspiracy”.

An Indian government official said: “There are very serious charges against him including murder and abetment of terrorism.

“The seriousness of charges against him have been shared with the British authorities.”

A spokesman for the Foreign, Commonwealth and Development Office said:

“Our staff continue to support Jagtar Singh Johal following his detention in India and are in regular contact with his family and prison officials about his health and wellbeing.

“We have consistently raised concerns about his case with the government of India, including allegations of torture and mistreatment and his right to a fair trial.

“There has been extensive ministerial engagement on Jagtar Singh Johal’s case.

“Most recently, the Foreign Secretary raised his case with Indian External Affairs Minister (Subrahmanyam) Jaishankar during his visit to India.

“Lord (Tariq) Ahmad of Wimbledon, minister of state for South Asia and the Commonwealth, has met with Mr Johal’s family on six occasions, most recently in October with their constituency MP.

“We will continue to raise our concerns directly with the government of India, including the need for an investigation into the allegations of torture.”

Dhiren is a journalism graduate with a passion for gaming, watching films and sports. He also enjoys cooking from time to time. His motto is to “Live life one day at a time.”
Thug went on Run for 2 Years after Knifepoint Robbery
Yes Bank’s Rana Kapoor Arrested for Money Laundering