Jagjit Singh plays at two exclusive dates in the UK on his ‘Voices of Emotions’ tour. DESIblitz.com gives you the chance to win free tickets to see the maestro of Ghazals live on stage.

Jagjit Singh is a name synonymous with the musical world of Ghazals, Classical Indian music and Bollywood. A highly regarded and respected artist, Jagjit Singh has recorded over 35 Ghazal albums with his first one, The Unforgettables, being released in 1976. He has recorded over

A connoisseur of Classical Indian music, Jagjit Singh introduced his unique style to the sound of Ghazals, which had a more contemporary feel. Instrumentation, rhythms and recording styles did not just use standard instruments such as harmonium and tabla. His sound was tremendously successful which had huge appeal without tarnishing the original perspective of Ghazals. He is credited with bringing the Ghazal genre, which was previously restricted to the elite classes, to the masses. 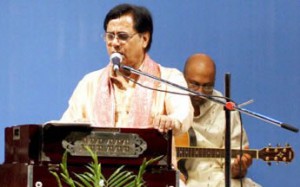 Ghazals are not only Jagjit Singh’s forte. He has recorded over 30 Bollywood film songs either in the capacity of playback singer or music director. Some of the well known hits include, songs and music for Arth (1982); song from Bhavna – “Mere Dil Mein Tu Hi Tu Hai” (1984); song from Khalnayak – “O Maa Tujhe Salaam” (1993); song from Dushman – “Chhitti Na Koi Sandesh” (1998) and song from Deham – “Yun To Guzar Raha Hai.”

Jagjit was also behind the hugely successful Punjabi film, Long Da Liskhkara for which he did the music and sang, “Ishq Hai Loko,” “Main Kandyali Thor Ve,” and the massive hit “Sare Pindch Puare Paye.” He has also sung Bhajans and Gurbani (Hindu and Sikh devotional hymns respectively).

To celebrate 70 years of his life and five decades of singing, Jagjit Singh, the numero Uno Ghazal Maestro, will be performing live the UK with a unique concert – Voice of Emotions. There are two dates for this unmissable music event to see this incredible artist colour the evening with his enchanting voice and melodies.

The true Voice of Emotions that has regaled audiences all over the world has been creating history of many sorts in the non-film Music segment of India. It is always a memorable experience and a rare treat to hear the maestro ‘Live in Concert’ and this special concert celebrating his 50 year career in Indian Music will make this a truly sensational experience. The concert will also feature some fantastic musicians from India playing the violin, flute, guitar, tabla and Indian percussions.

DESIblitz.com proudly presented an exclusive competition to win tickets for the shows.

We had an overwhelming reaction and entries to the competition. Many thanks to all of those who entered.

Jas likes to keep in touch with the world of music and entertainment by writing about it. He does like hitting the gym too. His motto is 'The difference between the impossible and the possible lies in a person's determination.'
Asha Bhosle Show ~ Free Tickets
Ravi Shankar Concert ~ Free Tickets