Is Pakistan next for a Covid-19 Crisis like India?

Official and experts in Pakistan fear that the country will hit the same Covid-19 crisis as India if not handled appropriately and on time.

India has been hit by the worst Covid-19 crisis with the daily reported cases surpassing the figure of 300,000.

Most hospitals in India have run out of oxygen, leaving the country with over 200,000 Covid-19 related deaths.

The officials in Pakistan also fear that Pakistan could face the same catastrophic Covid-19 crisis.

The hospitals in Pakistan are already full of Covid-19 patients with a constantly rising number.

Dr Muhammad Suhail from the Hayatabad Medical Complex, says that the situation in India could be a forewarning of what could happen in Pakistan.

Talking to the Telegraph about the Covid-19 crisis, Dr Suhail said:

“We are clearly heading towards a situation India is facing today.

“Both Pakistan and India have the same issues. People in both countries aren’t following the [Precautions].”

In recent weeks, like India, Pakistan has also seen a boost in the Covid-19 cases.

However, the current situation of Pakistan is fortunately not as critical as India.

The experts, however, fear that the country might be heading towards it.

There is an average of 5,500 daily cases and around 13o daily deaths in the country.

These figures match the level of cases Pakistan experienced during the first wave of coronavirus in June 2020.

However, the tests are not carried out on every individual, so there is a high chance that the actual figures can be way higher.

According to the national positivity ratio (NCOC), the number of infections in the tests done is approximately 10.8%.

Moreover, the mortality rate is also at its highest, around 2.4%.

The authorities are fighting the odds to provide more facilities, like beds and ventilators in the hospitals.

The government, however, fears that the number of patients needing oxygen might rise and cause a shortage of facilities.

The doctors, therefore, urge that unless the people become more careful, the country might hit a health crisis.

“We can see a sudden spike in the number of patients due to lack of standard operating procedures (SOPs), like neighbouring India.”

He also insists that although the doctors are trying their best to provide facilities to the patients, preventive measures are the best solution.

Advising the government on ensuring the SOPs, Dr Khan adds:

“The government should arrest people, seal shops and markets along with heavy penalties to send a clear message that the violators of SOPs wouldn’t be spared.”

While the UK variant has taken widespread hold in the country, Pakistan despite having a sudden rise in covid cases hasn’t yet reported any cases of the ‘double mutant’ variant found in India.

However, in the case of any crisis, Pakistan’s health system may be even less able to cope with the situation as compared to India.

That is because Pakistan spends only 3.2 per cent of its GDP on public health, as per the figures of the World Bank. 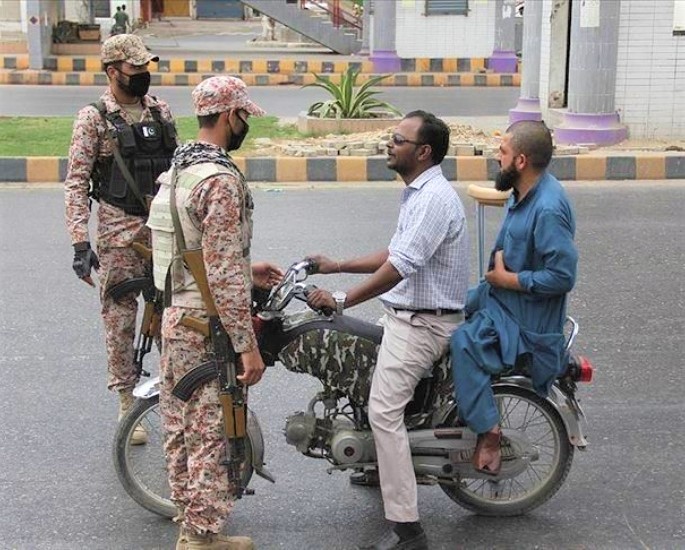 The vaccination process in Pakistan has begun but it is too slow as compared to the Covid-19 crisis.

Only a fraction of people are given the jabs, and there is no sign of speeding the process.

The government is waiting on the consignment of doses from the Covax scheme and otherwise reliant on Chinese donations.

Taking steps to ensure that SOPs are followed, the government has announced to deploy armed forces in the country.

Following the announcement of the Prime Minister, The army’s information wing said that:

“The primary purpose of the deployment of army troops is to help civil institutions and law enforcement agencies.

“In this testing time, Pakistan army will use all its capabilities to take every possible step for the protection of the citizens and their lives.

“We will go to every corner of Pakistan to ensure the protection of citizens.”

“[The army deployment is] the right step at the right time.”

Deploying the army to ensure SOPs might work and help Pakistan get out of the Covid-19 crisis.