India is recognised as an emerging super power, and the Commonwealth games should be the perfect opportunity to showcase the country’s strengths. However the multitude of problems the games have faced, before even opening, are not only marring India’s world image but seriously damaging any chance of them hosting the Olympics in the future.

Athletes have been pulling out of the Games

There are certain things that most people expect from their accommodation. A toilet that flushes and a bed that doesn’t collapse when sat on, for starters. However the athletes’ village in New Delhi has failed even to provide these basic things.

According to the Times of India when Indian boxer Akhil Kumar sat on his bed it fell apart beneath him. He said: “I checked the bed and part of it had no plywood on it. It was disappointing after enduring a long journey.” Another incident involved a South African athlete discovering a snake in the room.

These are fairly minor, in comparison to some of the other events in the build up to the games. A bridge at the Jawarhalal Nehru complex collapsed, injuring 27 construction workers and part of the weightlifting arena’s ceiling fell in. In addition to this, many basements in the athletes’ village have been flooded by monsoon water. This stagnant water is an ideal breeding ground for mosquitoes that spread disease, such as dengue fever. Athletes have been pulling out of the Games, as they value their health more than medals. 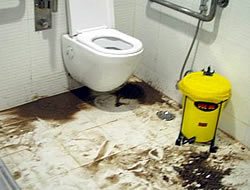 New Delhi is now in a frenzy of action in an attempt to save the ill-fated games. The Indian Prime Minister, Manmohan Singh, held a crisis meeting this week. A.K. Mattoo, a key figure of the Games organising committee made a public apology. However, he described the situation as a “collective failure” and was unwilling to assign blame to a particular party. He said: “I apologise for whatever has happened, whether directly or indirectly by us or by one of the stakeholders in this event.”

Hosting the Games was a golden opportunity for India to showcase its progress globally. Instead, it is stories of poor infrastructure, corruption and failure that are making the headlines. Indian people are bitterly disappointed by the impression this fiasco is making of their country. Pooja Kapoor, an insurance adviser from Delhi, was asked how she felt about the Games:

“I sincerely hope the government is able to pull off these Games so that we don’t get embarrassed in front of the world. There has been so much corruption.”

Hundreds of workers have been deployed in order to get everything ready in time. The urgency of the work has allegedly led to child exploitation. Some contractors have been encouraging children to assist their parents, in order to finish on time. 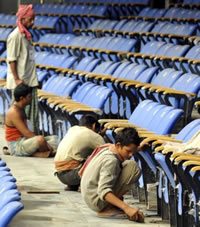 Azad Yunus, a labourer from Bihar, explained that his two sons, aged 11 and 13, were spending 10 hours a day laying paving slabs. He also added: “We’ve been told to leave and not come back till the Games are over.” Beggars have been removed from the streets, and there are reports of people being rounded up and given train tickets out of the city. Presumably this is to impress visitors coming to the capital for the Games.

On top of all the organisation issues, there is the threat of terrorism. Experts in risk analysis are advising visitors and athletes to avoid tourist attractions. UK-based firm Control Risks doubt that Indian police will be able to protect civilians. Chietigj Bajpaee, the company’s south Asia senior analyst, said: “I think there is a relatively high likelihood of attacks taking place, but these attacks may not target the Games venues themselves,”

Despite all this, athletes have started to arrive. Members of England’s lawn bowls and men’s hockey arrived on Friday. Initially staying at a hotel, they will move to the athletes’ village once all the preparations are finished. Wales and Scotland have also confirmed that they are satisfied to send their athletes for the competition. With the Games starting in just over a week’s time, there is still much to be done. And with India’s international reputation at stake, there is a lot of pressure to make these games a success.

Roz is a writer who has travelled extensively in South-East Asia and Europe. Her passions are learning about different cultures, learning foreign languages and meeting new and interesting people. Her motto is "a journey of a thousand miles begins with a single step."
Match fixing by Pakistani Cricketers
The Mess of Pakistani Cricket