The end of the IPL has proved that 20/20 league cricket sold as product in this format has been an all-rounder hit. This mixed venture of global star players, business people and Bollywood celebrities has produced a unique formula for success and leads the way for this league to become one of the most popular […]

The whole journey was wonderful

The end of the IPL has proved that 20/20 league cricket sold as product in this format has been an all-rounder hit. This mixed venture of global star players, business people and Bollywood celebrities has produced a unique formula for success and leads the way for this league to become one of the most popular events in the cricket calendar, every year.

The success on and off the field has been recognised by players and owners alike. Huge gains were made on the field by the players in terms of experience, test of skills, playing with global players and of course, large salaries. Off the field, revenues from television deals, ticket sales, publicity and merchandising, brought home major profits for many concerned.

The league champions, Rajasthan Royals winning that three wicket thriller over the Chennai Super Kings was a typical example of the excitement generated by the league and its matches. Shane Warne the captain of the Roylas said “The IPL was a test of character for the team and the players responded well. The whole journey was wonderful.”

The Chennai Super Kings, captain, M.S. Dhoni said of the final game, “You win a few, lose a few. I like to remain in the middle lane and not get carried away by success or devastated by defeat. Sport is to be enjoyed.”

One of the key reasons for the success of the IPL was the drive, commitment and competitive attitude of the players, which was sustained through out the tournament. Without doubt this was under-pinned by the fortunes of made by the players but team loyalty did play a significant role.

At the same time team owners played their role as well, ensuring there was no room for slack. Where under performing team officials were sacked and egos of star players diluted to ensure results and expectations were achieved from their investments. 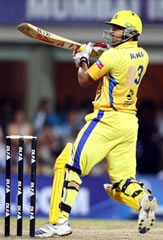 Naturally, there were some downs in the tournament such as the Harbhajan Singh incident of slapping Sreesanth and his subsequent banning, the protests regarding the cheerleader dress-sense and the racist remarks against black cheerleaders (click here for story).

Players from England, could not make the tournament due to national team commitments and governing ECB rules. Something that will hopefully change in the future. As it will be fantastic to see the likes of Monty Panesar, Ravi Bopara and Kevin Pietersen participating in this great tournament.

Another interesting area where the IPL had an impact was on the demand and supply of team jerseys for fans. The demand outstripped supply and has led to a trade of copied shirts and kits being sold by street vendors and market stall owners. Shirts can be made available upon request despite raids from police and authorities. Reebok and Adidas India are amongst the real suppliers hit by the unexpected rise in demand for kits after the tournament.

Typically, Reebok has sold mainly t-shirts and jerseys at prices between Rs 999 and Rs 1,500. The highest selling kit is the Kolkata Knight Riders. The success of this being down to no other but King Khan himself. Team director Joy Bhattacharya, said that the superstar owner of the team, Shahrukh Khan, was the key reason for sales outside of Kolkata especially.

So, in the future as with any business venture there are always lessons to be learnt and improvements to be made. This fusion of corporates and cricket, if managed well and pro-actively, will become the de-facto standard for the new face of 20/20 cricket. Something both parties need to work on and aim towards to make the IPL even more popular.

Amit enjoys creative challenges and uses writing as a tool for revelation. He has major interest in news, current affairs, trends and cinema. He likes the quote: "Nothing in fine print is ever good news."
Too black for IPL?
Paul Ince Football’s first British black manager