Two Indian youths from Uttar Pradesh were brutally beaten before one had their head shaved for allegedly having an affair with a married woman.

he had been in an illicit relationship with a married woman

Two Indian youths were tied to a pole and beaten by a mob. Following the assault, the attackers used a razor blade to shave the head of one of the young men.

The incident happened in the city of Agra, Uttar Pradesh.

Once the police heard about the attack, they managed to locate the scene and arrived to find the two men still tied to the pole.

They were freed and taken to hospital for treatment. A case was subsequently registered after a video of the beating went viral.

It was reported that one of the men was having an affair with a married woman. Both men had gone to meet the married lover.

While the mob attack happened in broad daylight, the Indian youths were caught during the night of November 24, 2019.

They had gone to meet the married woman at her in-laws’ house but were caught.

One of the men was identified as Anil. He explained that he had been in an illicit relationship with a married woman at the house and went with his friend to meet her.

However, the woman’s father-in-law caught the young men sneaking towards the woman’s room.

He raised an alarm and a group of people, reportedly other family members, quickly confronted the two men.

The youths were grabbed and beaten whilst being interrogated.

After Anil admitted to having an affair with the married woman, both men were dragged outside and tied to a pole.

Members of the mob beat the men with sticks. The daylight assault led to a crowd gathering and watching the incident unfold.

Following the prolonged attack, one person took a razor blade to Anil’s head and shaved most of his hair off, leaving just the sides and back. 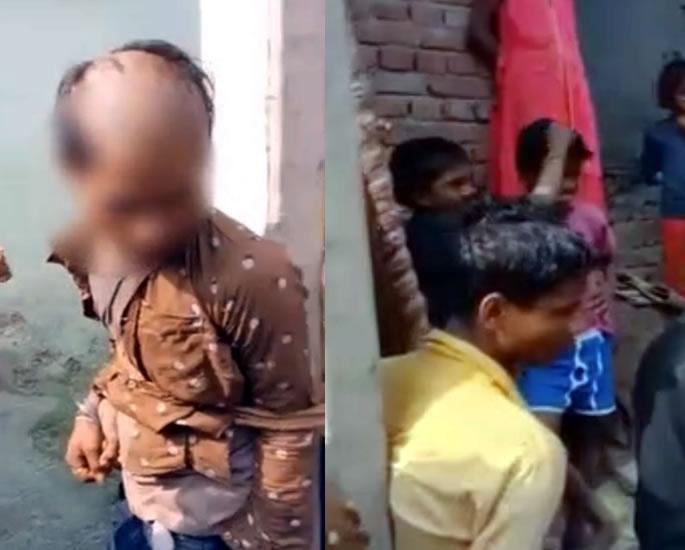 Meanwhile, one member of the crowd filmed the incident and reportedly shared it online.

Officers from Malpura Police Station heard about the mob beating and quickly arrived at the scene.

The area was empty apart from Anil and his friend, who were both still tied to the pole. Both men were freed and taken to hospital for treatment on their injuries.

The two men suffered bruises, however, having his head shaved has left Anil feeling publicly humiliated.

Police officers confirmed that a case has been registered. Senior Superintendent Bablu Kumar stated that action will be taken against the mob for carrying out the beating.

Dhiren is a journalism graduate with a passion for gaming, watching films and sports. He also enjoys cooking from time to time. His motto is to “Live life one day at a time.”
Indian Man killed for Saving Mother thrashed by Relatives
Pakistani Girl aged 14 Sold by Father to Blind Man for Rs 30,000