Tejinder Pal Singh, an Indian taxi driver, has been named ‘Australian of the Day’ for giving free food for the homeless in Darwin for the past three years.

“He drives for 12 hours in the night and then [spends] five hours cooking around a gas stove.”

Tejinder Pal Singh has been feeding the homeless in Darwin, Australia, for the last three years.

Little did the Sikh taxi driver know his gesture of kindness would earn him the title ‘Australian of the Day’.

On the last Sunday of each month, Tejinder and his family would prepare Indian food and hand them out to the homeless in Darwin.

Tejinder would often spend hours cooking chickpeas, rice and vegetarian curry and then drive around in a small white van to give food to anyone in need. 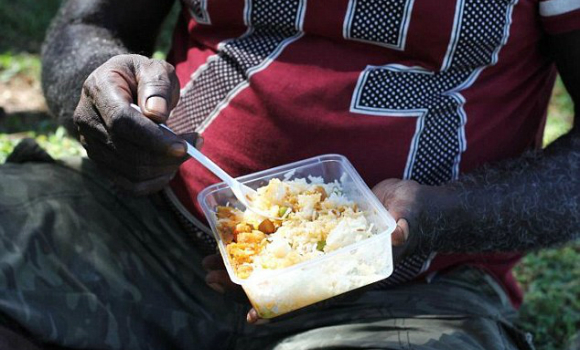 This is no easy job for the Indian migrant living Down Under, who works as an air-conditioner mechanic during the day and driving a taxi driver at night.

His wife, Gurpreet Kaur, says: “He worked all night and he didn’t sleep at all. It’s amazing how he does it.

“He drives for 12 hours in the night and then [spends] five hours cooking around a gas stove.”

Aside from cooking and transporting the food, Tejinder also needs to locate the homeless and ‘sometimes it’s very hard to find people’. 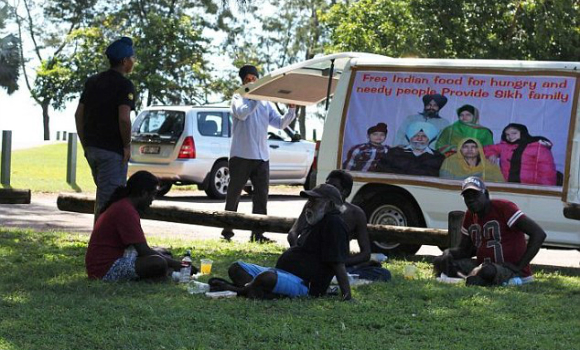 The Indian says his religion is his biggest driving force.

Tejinder says: “Our religion says 10 per cent [of your income goes towards] the needy, poor, who need help, no matter if they follow your religion.

“I do something for homeless people, so they get more energy and they’re happy.

“I want to help needy people. Anybody, no matter black, no matter white, no religion. If they are hungry, I will give them food.

“The van, the pots, anyone can use them. It’s for mankind.”

His teenage son has a great deal of respect for him, describing his father as ‘kind-hearted’ and ‘helpful’.

Navdeep tells ABC: “I help my dad pour cordial for people who are thirsty, they deserve a cold drink…it’s a really hot day.” 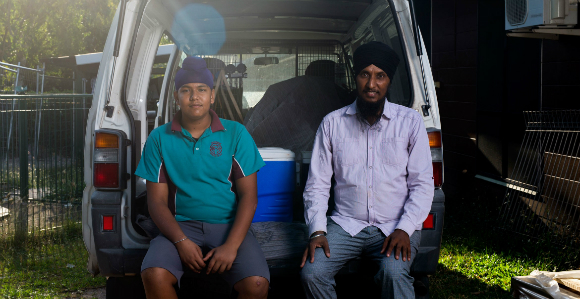 Tejinder started his ‘charity food truck’ in 2012, when he realised there was misperception and a lack of understanding of his religion in Darwin.

One of his passengers wanted to find out which school his children attended, so that he could send his children to the same school to avoid falling victims of terrorist attacks.

Now that he makes regular appearances in his local area giving out free food in his black Turban, Tejinder hopes to break down cultural barriers and help people better understand his religion. 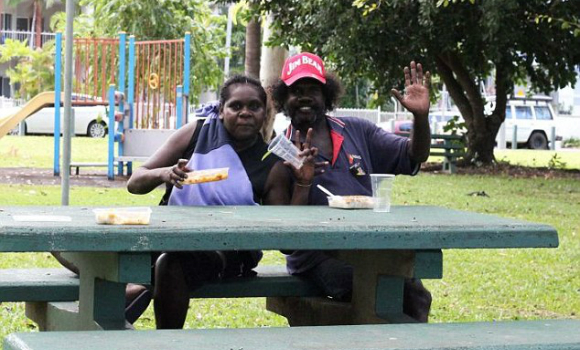 He has even turned away some of his supporters who offer money to help with his charitable act.

Instead, he encourages them to follow in his footsteps and start their own ‘food truck’ to spread the love in the neighbourhood.

‘Australian of the Day’ runs in partnership with the prestigious Australian of the Year Awards, supported by the Commonwealth Bank, to celebrate extraordinary people in everyday lives through photographs and mini-stories.

Images courtesy of Australian of the Day, ABC and Daily Mail