The Palace was covered in astonishingly beautiful floral arrangements.

Vienna, the picturesque capital of Austria, was the recent host of a jaw-dropping wedding between the son and daughter of two powerful Indian business gurus.

Parth Jindal, the only son of JSW Group chairman and billionaire Sajjan Jindal, married Anushree Jasani, the only daughter of Uday Jasani of Jasani Realty in a three-day celebration.

In Vienna to witness their union were a long list of reputable figures, such as Lakshmi Mittal, Uday Kotak, Natasha Poonawalla, Nita Ambani , Akash Ambani and fashion designer Sandeep Khosla.

Celebrity performances, world-class cuisine and grand decorations all made the Indian wedding one to remember for years to come.

It all started on May 7, 2016. Around 1,000 guests flew in from all over the world to attend a welcome dinner at the Hofburg Imperial Palace. 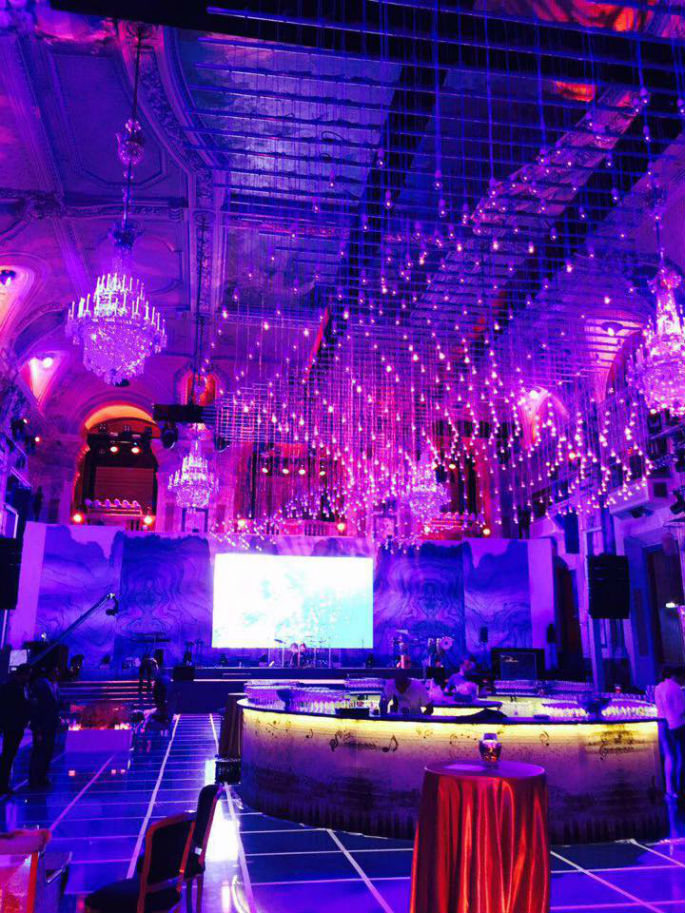 Echoing its romantic theme of ‘Symphony In Love’, the historic venue was covered in astonishingly beautiful floral arrangements and musical motifs all the way from the grand staircase to the majestic dining hall.

Surrounded by an ocean of flowers such as roses, hydrangeas and sweet peas, notable guests wined and dined at the official residence of Austria’s president.

Their first celebrity treatment of the wedding weekend was Latino singing sensation Enrique Iglesias, who performed for and with the couple on stage! 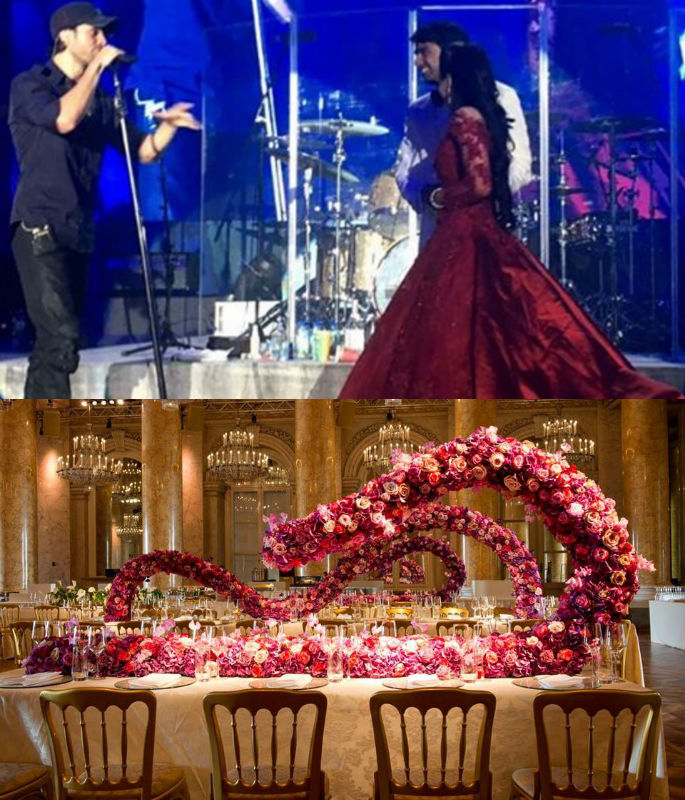 The next day was the Mehendi ceremony, which took place at the Palais Liechtenstein and was themed ‘Floral Orchestra’.

Blessed with a sunny afternoon, the bride and her friends and family enjoyed a happy gathering at the outdoor garden, filled with flowers and decorations of different shades of pink.

Dhol players and Bhangra dancers created a lively atmosphere, delivering an interesting contrast against the backdrop of the Baroque building. 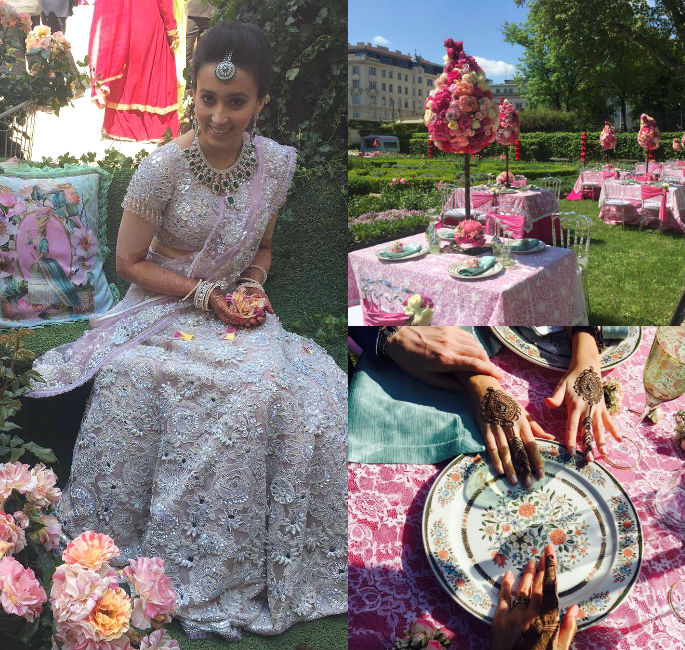 The choice of venue for the Sangeet was an art studio called Art for Art, featuring high ceilings and slanting glass windows. And the theme was ‘The Sound of Music’.

Guest enjoyed their second star treatment from sensational Indian singer, Mika Singh. He commanded the 80-feet stage and ignited the room with his energy, bringing a Desi groove to the shimmery dancefloor. 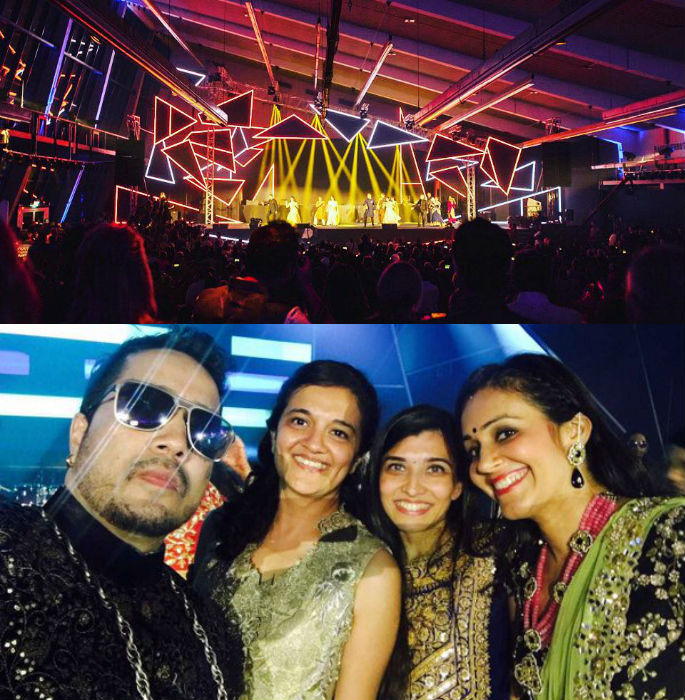 On May 9, 2016, Parth and Anushree showered their family and friends with the luxury of a big fat Indian wedding that they had been waiting for.

A mandap made of peonies and roses was set up in a pond, with the imperial 18th-century Belvedere Palace as its backdrop. At the heart of the mandap was a beautiful candle-lit chandelier.

Decorative dome-shaped umbrellas lined both sides of the pathway, where a brightly-coloured carpet with funky geometric patterns was laid out for the couple to make their grand entrance.

The opulence of the wedding event and the love in the air stayed true to its theme of ‘Celestial Rhapsody’.

Since meeting in Mumbai’s Cathedral and John Connon school, Parth and Anushree finally sealed their seven-year relationship with an incredible celebration. 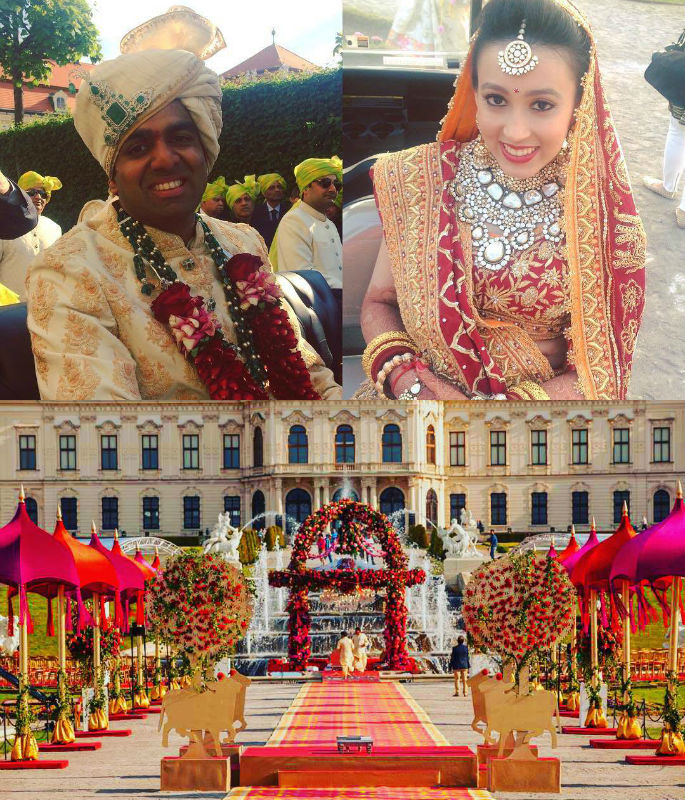 The couple marked their engagement in July 2015 in another extravagant party with over 2,000 guests at the Taj Mahal Palace in Mumbai.

In January 2016, Parth’s sisters Tarini and Tanvi threw a pre-wedding bash for the couple at Umaid Bhawan Palace in Jodhpur.

Enjoy our gallery of Parth and Anushree’s wedding below: