An Indian shop owner has been targeted with abusive letters for displaying England flags on his shop in support of the national team at the 2018 World Cup.

"It is shocking how backward minded people think"

An Indian shop owner received abusive letters for displaying England flags above his shop in support of the English team playing at the football World Cup 2018 tournament.

The manager of GMS Heating & Plumbing Spares based in Ilford, UK, Mr Singh said that he was shocked to receive such letters telling him that being an Indian means he should not be supporting England.

However, he is defiant and says such hate mail is not going to deter him from supporting England or stop him from displaying the St George’s flags on his business premises.

The hate mail he received was after he had put up the England flags on Thursday, June 21, 2018, in time before the England group match against Panama, showing his support for the national side.

It seems the letters were sent to Mr Singh by people who do not agree with him being patriotic towards England and it is wrong of him for doing so, being an ‘Indian’.

Flabbergasted at the contents of the letters, the business owner who is in the heating and plumbing trade, said that he has supported England for the last 20 years everytime they have played in the world cup and the letters were actually egging him on even more now.

“We are a family business that my father started over 30 years ago.”

“Supporting England during the football is enjoyable and all part of the fun – and some people seem to think it is wrong for us to do because we are Indian?”

The letters he received were anonymous and handwritten with handwriting which contained poor English. 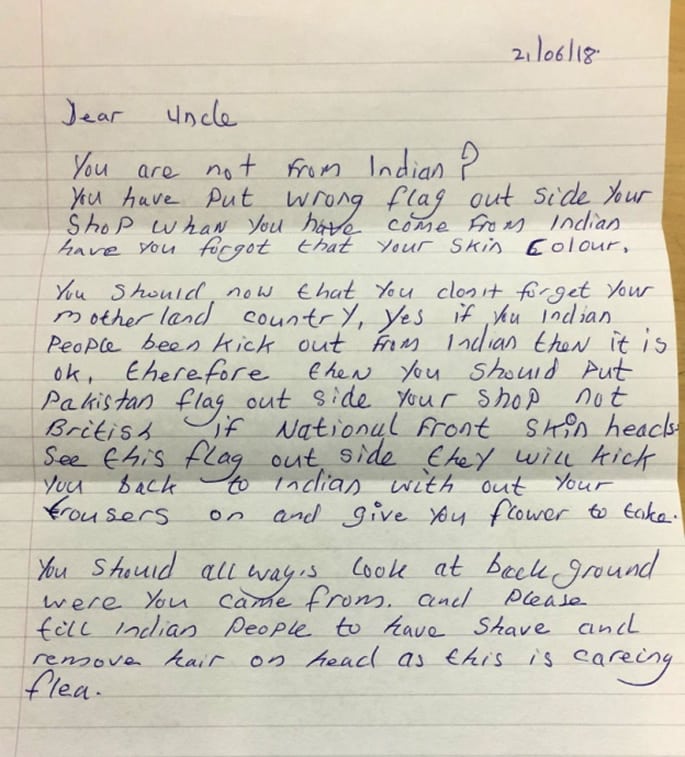 In one note, the author wrote:

“You have put wrong flag outside your shop when you come from Indian have you forgot your skin colour.”

Whilst telling Mr Singh he should not be displaying the ‘British’ flags, the note confusingly tells him to display the “Pakistan flag” instead, which is, of course, a different country to India.

The note then draws attention to the racism Mr Singh would get for displaying the flags and says:

“if National Front skin heads see this flag outside they will kick you back to India without your trousers on.”

Mr Singh admits that although the letters do not deter him, it has put a dampener on celebrating the World Cup and especially, his support for England. He said:

“It is shocking how backward minded people think that by supporting the country you live in you will be dishonouring our religion or insulting India.”

“These are the wrong people, not the ones who enjoy being part of the English culture.”

“This is a rather unusual situation but abuse is abuse and if someone is abused for putting up England flags this is wrong.”

“It shouldn’t be happening and racism needs to be condemned.”

Mr Singh said that it was not just his business that received the hate mail for displaying England flags, another business on Ilford Lane also received similar abusive letters.