Is India ignoring Victims by not Criminalising Marital Rape?

After the horrid 2012 Nirbhaya rape case, India still has a rape problem. Marital rape is the highest but the government does not agree it is a crime.

"What may appear to be marital rape to an individual wife, may not appear so to others."

Lawyers of the Indian government argue that introducing a marital rape as a crime will introduce a risk to husbands, irrespective of the plea of so many sexually abused women.

They feel it could “destabilise the institution of marriage” and introduce the risk of “harassment” to husbands.

This introduces a huge dilemma for campaigners and victims who are appealing for the law to be changed in favour of marital rape as a crime.

Currently, the Indian Penal Code states that “sexual intercourse or sexual acts by a man with his own wife, the wife not being under fifteen years of age, is not rape.”

Submitting the argument to the court against criminalising marital rape, the lawyers said:

“What may appear to be marital rape to an individual wife, may not appear so to others. As to what constitutes marital rape and what would constitute marital non-rape, it needs to be defined precisely before a view on its criminalisation is taken.”

What happens to real victims of marital rape if it is not defined in the country’s legal system?

A number of women’s rights groups in India are seeking the removal of the legal point that allows the act of marital rape to be excluded. They have filed petitions.

Despite a number of high-profile cases of assaults on women have raised the issue of India’s rape laws not being in favour of the victims, there are millions of women who are being abused and have no rights.

In Section 375 of the Indian penal code, it distinguishes women into two categories, married and unmarried. Therefore, providing protection for non-married women but discriminating against those, not married.

Marital rape is viewed to be far more common in India compared to any kind of other assaults committed against women by a partner. As it is in many countries.

According to the Research Institute for Compassionate Economics, 98% of rapes committed were by husbands. 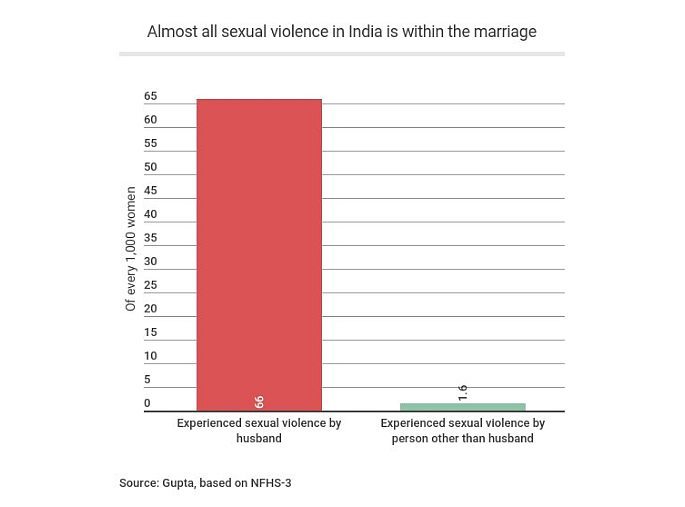 Further analysis revealed 10% of the women reported being forced to have sexual intercourse and 5% saying they were forced to perform sexual acts they did not want to.

Age, education and where you live had a huge impact on the figures too.

Many girls in rural areas of India are married off at a very young age and to them, marital rape will not be seen as a crime against them, as it seen as the right of the husband to do as he pleases.

Many of these young brides are raped on their wedding night and go on to accept it as part of their life, as a dutiful wife.

11.2% of the reports of sexual violence in the survey originated from married women living in rural areas compared to 7.3% of those living in urban areas.

12.5% of the women reporting sexual violence had no access to education. Showing that less educated women were easier targets compared to educated women.

Also, illiterate men and alcoholics (23.6%) were shown to engage more in sexual violence with their wives, compared to those educated.

Irrespective of such figures from reports and surveys, the Indian government is not ready to change the law.

The government is suggesting that those wishing to convict husbands of marital rape are following Western customs. Saying:

“The fact that other countries, mostly Western, have criminalised marital rape does not necessarily mean India should also follow them blindly.”

“The concept of marital rape, as understood internationally, cannot be suitably applied in the Indian context due to various factors like level of education/illiteracy, poverty, myriad social customs and values, religious beliefs, mindset of the society to treat the marriage as a sacrament, etc.”

Caveating that it cannot be law until it will “ensure adequately that marital rape does not become a phenomenon that may destabilise the institution of marriage [and become] an easy tool for harassing husbands.”

However, neighbouring countries like Nepal and Bhutan do have marital rape laws. Proving it is not just the West that provides protection to wives from sexual violence.

It is evident this is looking like a long battle for victims and the plea of women who want protection from such sexual violence and abuse as marital rape.

Basically, because the Indian government is not bowing down to a change that it feels is reflective of the West despite so many other changes already influenced by the West, and irrespective of the statistics, it believes this law does not apply to the ‘context’ of India.

Prem has a rich interest in social sciences and culture. He enjoys reading and writing about issues affecting his and future generations. His motto is 'Television is chewing gum for the eyes' by Frank Lloyd Wright.
Underage Sex Workers being trafficked to Work in Mumbai Brothels
Life of a Transgender when Living in South Asia