Life of a Transgender when Living in South Asia

Often brushed under the carpet, transgender people are rarely talked about in South Asia. DESIblitz lifts the lid to explore the prejudices they face.

"People need to go back to the scriptures and read how honoured the transgender community once was."

Across parts of the Western world, transgender people face various difficulties. Stemming from others’ prejudices or attitudes, they can struggle to find a place in society.

In South Asia, this also holds true in some areas of the continent. However, others are also becoming gradually accepted.

Many transgender South Asians deem these acts as a ray of hope; a step closer towards acceptance. However, many communities still have a long journey to go before actual gender equality can exist.

Indeed, many will still experience confusion about the term and who it applies to. Transgender refers to when a person does not associate with the gender they are assigned with at birth. Instead, they feel they belong to another gender.

The term refers to people who have undergone reassignment surgery, hormonal treatment or no medical treatment at all. However, it’s important to note that their gender identity is separated from their sexual orientation – more on this can be found here.

A census in August 2017 showed that over 10,000 transgender people live in Pakistan. An Indian census in 2014 also showed high numbers, reporting 490,000. With such high figures, it seems now is the right time to clear the misconceptions on this topic.

Hijra ~ A Community Shrouded in Taboo 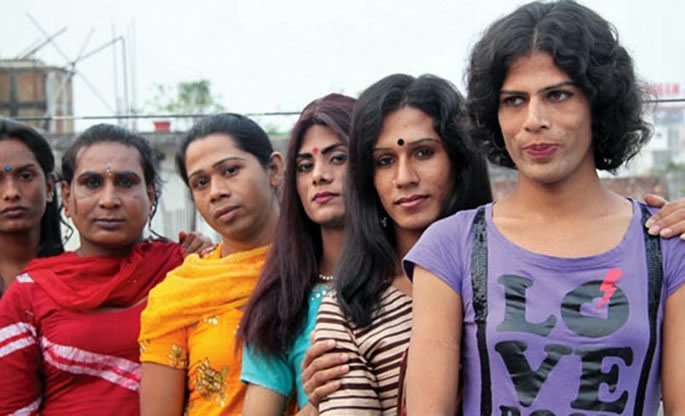 In South Asia, particularly India, there lies a transgender community, where individuals are known as a Hijra. An Urdu and Hindi term, this refers to a transgender person or eunuch who was assigned male at birth and now identifies with either a feminine or third gender.

Hijras have a long, recorded history in South Asia, surrounded by many widespread superstitions. One such that they have the ability to ‘curse’ those who mistreat them.

They also had influential status in Mughal courts and even celebrated in sacred Hindu texts.

While these beliefs may have once helped transgender individuals find tolerance, it hasn’t completely eradicated discrimination altogether.

This means then, Hijras form a tight-knitted community, replacing family with each other. Living under the head of a guru, a senior member of the community, who provides shelter and safety.

However, it has become the norm to shun and belittle transgender people in general. Regarded as incapable of anything beyond begging and prostitution.

Kiran, a transgender person living in Pakistan, spoke about her lack of studies. She cited her classmates’ bullying as the result of her poor education.

She studied up until the 6th grade when she was between 11-12 years old and went to a boys’ school. There she suffered a great deal of teasing.

Despite the negativity, some victims choose to rise above the hatred. Bindya in Pakistan says:

“We just leave it. What’s the point? We smile and walk away. These people are stupid. So why should we act stupid too?”

Struggles of Prejudice and Limited Options 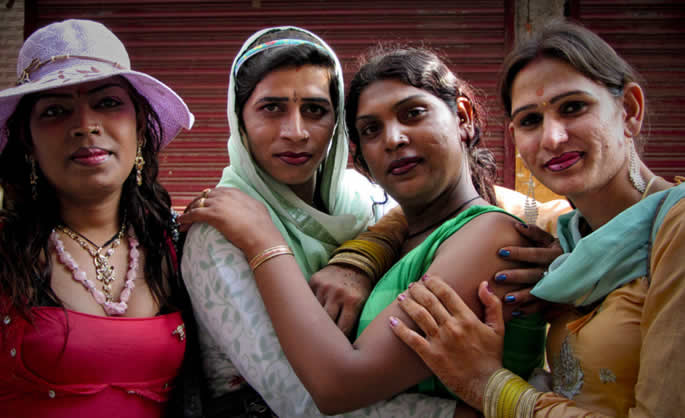 It’s not only their gender identity that many face rejection and criticism. But they also face struggles with misconceptions around their sexuality.

While many South Asians may think transgender people have overt sex lives, this sexual activity may stem from abuse. Many are sexually abused and become sex workers in adult life, often through little choice of their own.

But for some, this occupation may be the only choice available. In an interview with Youth Ki Awaaz, one transgender sex worker explained prejudice and misconceptions force some into the sex trade. She said:

“I was forced to drop out of school. My parents did not support me. Society did not accept me. Then do I have a choice?

“Most of the transgenders from poor families do not get an education, and a job is a distant dream. We are accepted as sex workers. So our numbers are high in this trade.”

A loss of acceptance can lead to abandonment at young ages; whilst some voluntarily leave the family home. They choose to live with those who acknowledge their daily struggles. And in the case of hijras, even can empathise.

“We feel like they are our own. We enjoy it.” Faizee, a transgender person living in Pakistan, says. Another transgender individual, Sharma added: “I grew up, lived with these people. I feel I’d die if they weren’t there for me.” 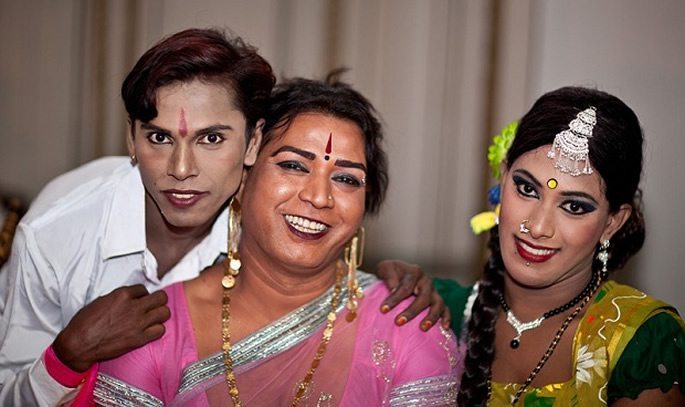 Despite the hardships of finding a place in South Asian society, there are many figures in the transgender community who aim to tackle prejudice and support others.

One such figure is a Pakistani transgender Guru, Bubli. Hugely popular within the community, many look upon her as a parental figure. One transgender individual shares: “She thinks of us as her children. She puts us first.”

Bubli has been actively campaigning for transgender rights. Another who also works in this campaign is Laxmi Narayan Tripathi.

She became the first transgender to represent in the Asia Pacific region for the UN. She has also broken barriers by starring in many Indian films, TV shows and has gained fame for dancing.

On the topic of transgender communities in India, she once said: “If a mother saw a Hijra she would order her daughter inside the room. This fear comes from the mindset that we are vile.

“We too are human beings and should be treated like one. People need to go back to the scriptures and read how honoured the transgender community once was.”

What Laxmi refers to here is the importance that was placed upon Hijras in centuries past. As mentioned above, they held significant status. But what changed?

The answer to this question lies in the British Raj. Once Britain gained rule over India, which then included Pakistan and Bangladesh, they brought colonial views on gender identity.

Not sharing ancient views that gender was fluid, the British Raj overturned the perception of transgender people. Not only did they suppress gender fluidity, but a law in 1897 announced all eunuchs criminals.

While South Asia has since tried to rectify these strong, colonial influences, it still the impact is hard to wash away. Still, many share divided opinions. However, this division is not different compared to other countries.

Mei*, a British Vietnamese student, shares her views: “If it doesn’t bother anyone, why should it be an issue? To each his own.”

In contrast, Salma*, a student from the Middle East reveals: “In the Middle East, the LGBT community is not spoken of. I wasn’t aware that transgenders even existed until a few years ago. I never really thought about it that much to have an opinion on it.” 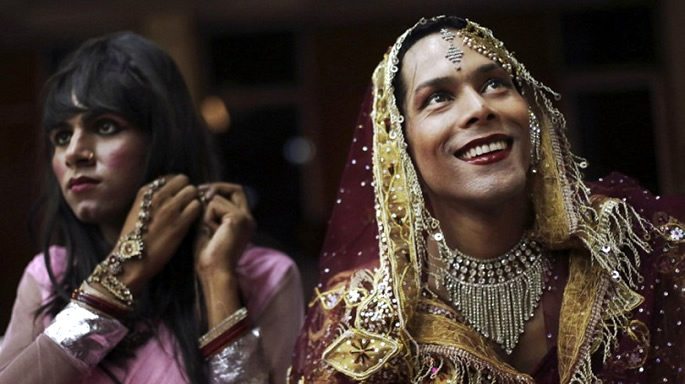 Fortunately, many South Asian countries have taken legal action in an attempt to strive for equality.

Pakistan’s Supreme Court granted the transgender community the right to vote and receive a National Identity Card in 2011. In addition, the identification of a third gender became approved in 2013.

Nepal has witnessed similar efforts, in that the Ministry of Foreign Affairs amended Nepalese passports. They allowed the identification of a third gender in 2015. India and Bangladesh have also followed suit, with Pakistan mentioned earlier.

Unsurprisingly, all these efforts have failed to resolve the prejudice who many face on a daily basis. Issues that some organisations try to offer support with.

Trikone, a non-profit organisation aimed specifically at the South Asian LGBTQ+ community, aspires to not only increase awareness. But it promotes an overall acceptance of the community. Established in 1986, it’s the oldest of its kind in the world.

In addition, Bindya Rani, chairperson for the empowerment of MSM (males having sex with males) and transgender community is one of few brave individuals willing to fight for equal treatment of the LGBT community.

“In Europe, people get equal rights. We’re not asking for superior treatment over men or women, we just want the same rights as other Pakistanis.”

The harsh reality that many transgender people face in their lives puts South Asian society to shame. Especially when one considers that prejudice may have stemmed from British colonialism.

The struggles that many face from this lasting impact means they at risk of having a poor education. This includes rejection from loved ones and limited choices for both work and life.

However, with transgender figures representing their community and the implementation of legal action, perhaps these prejudices won’t stay for long.

With slow yet steady progress, a more tolerant and peaceful society appears to be well underway.

Names marked with * have been changed