Despite his parents’ disapproval, Indian man Junaid Khan got married to a transgender person at a temple in Madhya Pradesh on Valentine’s Day.

"I want my family to accept us"

Junaid Khan, aged 30, from Madhya Pradesh, India got married to a transgender person on Thursday, February 14, 2019.

He pursued his love and sealed it with marriage on Valentine’s Day.

Mr Khan tied the knot with Jaya Singh Parmar, aged 32, despite his family disapproving of the marriage.

Even though the groom’s family did not accept their relationship, Jaya’s family supported her throughout.

They got married at a local temple in a traditional Indian ceremony and exchanged garlands against his parent’s wishes. The couple plan to have a second wedding ceremony as per Mr Khan’s traditions.

Mr Khan has stated that he loves his bride and he will continue to do so even though his parents do not accept their marriage and relationship.

He said: “I want my family to accept us but even if they don’t, I will stay with her. I love her a lot and I always keep her happy.” 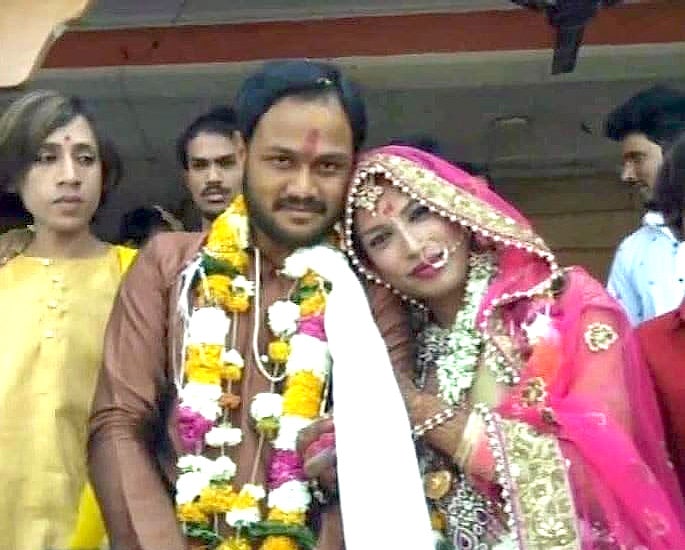 Junaid and Jaya have been in a relationship since 2018 and got engaged on Wednesday, January 30, 2019. They chose Valentine’s Day as their wedding date as it is a day which celebrates love worldwide.

“We are in love for the last one year and we married to formalise our relationship.”

“We are really happy to tie the knot on the occasion of Valentine’s Day. I will always keep my life partner happy.”

Getting married is a challenge for a transgender person as the rest of society finds it odd. Generally, transgender people are subjected to prejudice in India and other South Asian countries.

Following their marriage, the couple has said that their only wish is to be accepted by Junaid’s family.

“Getting married is a big challenge for a transgender person because the society finds it odd.”

“His parents were against this marriage but he still chose to marry me.

“I hope they’ll accept me soon and one day I’ll get to serve my in-laws.”

Jaya was previously employed as a social worker for Badlaav, a Non-Profit Organisation (NGO) that works amongst the LGBTQ community.

“Earlier, Jaya was associated with local transgender groups and used to collect (neg) money along with them.

“But she left them as she wanted to establish a start-up.”

As well as having a second ceremony, the couple will also move to get their marriage registered with the relevant authorities.

Dhiren is a journalism graduate with a passion for gaming, watching films and sports. He also enjoys cooking from time to time. His motto is to “Live life one day at a time.”
Punjabi Husband gets beaten By Wife and In-Laws
Kazi Brothers jailed for Baseball Bat attack in Leicester