Income Tax raid on Miss Pooja and Others

Indian officials have conducted an Income Tax raid on the homes and offices of Punjabi artists including Miss Pooja, Gippy Grewal and Diljit Dosanjh.

In a major operation, the tax authorities targeted the Punjabi entertainment industry and performed raids in over 15 premises in Punjabi cities including Ludhiana, Jalandhar, Amritsar, Patiala, Rajpura and Chandigarh.

The raids on Miss Pooja took place between Wednesday 5th December and Thursday 6th December 2012 and were part of a number raids on singers, actors and producers of Punjabi music and films. Punjab police assisted tax officials to conduct the raids.

As well as Miss Pooja, Punjabi artist Gippy Grewal was a target along with the business offices of the popular Punjabi record label Speed Records and Batra Films in Jalandhar.

Parallel raids by officials took place on the singer and actor Diljit Dosanjh’s in Ludhiana. Dosanjh who was the hero of Punjabi hit movie “Jatt & Juliet” and the producer of the movie, Darshan Singh Grewal, had their houses raided in Dugri Phase-II and Barewal Road respectively. 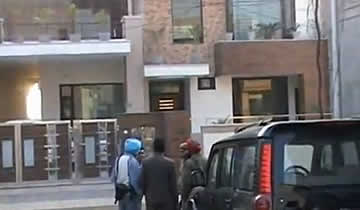 Miss Pooja otherwise known as Miss Gurinder Kainth had Income Tax officials raid her home on Dhamoli Road in Rajpura and her office in Jalandhar, Punjab, India. Some officials also went to Punjab National Bank where Miss Pooja has an account.

Sources report that the residence of Romy Tahli, the producer of Miss Pooja’s new movie has been searched.

Gippy Grewal’s residence at Mohali, Punjab, was raided and Jalandhar witnessed forced entry and searches by tax authorities of the residence of Mr. Dinesh of Speed Records at Seth Hukam Chand Colony, Ruby Electronics at Phagwara Gate and the home of Mr. Ruby in the Jyoti Nagar vicinity.

According to Dharamvir Nagpal from Rajpura, Dr. Raman Garg, the Deputy Commissioner of the Income Tax Department it was stated that the raids have been conducted by separate teams tax officials under the direction of Harjit Singh Sodhi, the Director of the Investigations.

“Searches have been conducted at offices and residential premises of Punjabi singers and Punjabi film producers,” said Mr Sohi.

Speaking about the tax returns filed by the artists and film producers, Sodhi said:

“They [Punjabi singers and film producers] have shown very nominal income in [their] tax returns.”

The sting operation focused on multiple raids by the officials from early morning, through the days and into the night across the cities. Sodhi added: “Simultaneously, the premises of Batra Films and Speed Records were raided in Jalandhar.”

The Punjabi Music and Film industry have been stunned by the recent raids but the investigations are following leads where named artists are said to be in possession of unaccounted and non-taxed money in the form of cash. Because payments are preferred by artists in cash for shows and music albums rather than cheque or bank deposits and receipts and invoices are fraudulent.

Watch the video of the raid on Miss Pooja’s house:

Findings from the raids include several undeclared bank accounts belonging to these artists and business owners. The houses and all belongings such as cars are all under investigation by the Income Tax department.

An initial report suggests that the investigation teams recovered about Rs.80 lakhs of unaccounted cash during the raids and also ledgers and documentation which have transactions worth crores related to illegal business deals between the singers and companies. Also, twelve to fifteen bank lockers were sealed by the raiding teams.

Final reports will unravel the full recovery of these raids and the amount of tax fraud committed by Miss Pooja, Gippy Grewal, Diljit Dosanjh and the associated companies.

Tax fraud by music artists and producers is not new and continues in the industry until they are targeted like in this manner. Cash transactions are a key aspect of tax evasion and it is not just the artists who are involved in these scandals. The record companies, producers, promoters, distributors and accountants (to some degree) all participate as long as they can get away with it. However, at some stage revelations do catch up with them.

Jas likes to keep in touch with the world of music and entertainment by writing about it. He does like hitting the gym too. His motto is 'The difference between the impossible and the possible lies in a person's determination.'
Big B launches Mohammad Rafi Biography
One Pound Fish Man being deported to Pakistan