Winter 2014’s biggest gaming festival hit the Ricoh Arena on November 21st for 3 days of pure gaming fun. Insomnia, aka i53 came into Coventry and brought hardcore and casual gamers from all over the world with it!

"Insomnia is great and its crazily busy, theres so many awesome fans here, so much to see and do!"

The highly anticipated event brings together people from all over the world to share in its delights and focus on what they like best: gaming!

DESIblitz was at the event to soak up the atmosphere and see what British Asians had to say about this gaming extravaganza.

For 2014, Insomnia 53 took place at the Ricoh Arena, Coventry and began on Friday 21st November 2014 with a great opening ceremony.

Between the 21st-23rd November, event organisers, Multiplay put on a variety of gaming activities for visitors to see and take part in.

There were also exhibition stalls where sponsors for 2014 came out in full force to give gamers an insight into what they plan to do in order to take gaming to the next level. 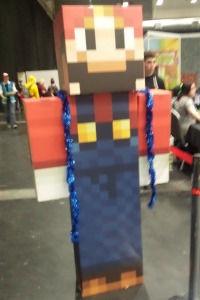 Visitors could also pre-order games for free to ensure they don’t miss out on their favourite releases over the coming months.

Other sponsors included GamesQuest, one of the leading organisations in card and board games. They also presided over the table-top tournaments held at Insomnia, giving gamers a change of pace by playing more traditional games.

There were also panel talks by some of the biggest names in the gaming industry and multiple meet and greet sessions.

DESIblitz met some of the biggest YouTube gaming stars in KSI, Vikkstar123, Miniminter, Beh2inga and ZerkaaPlays who are part of the gaming group, ‘The Sidemen’.

Here’s what Vikkstar123 had to say about the event: “Insomnia is great and its crazily busy, there’s so many awesome fans here, so much to see and do!”

Over the course of 4 to 5 years, he has been working hard to produce entertaining videos and now has over 1.3 million YouTube subscribers.

He is certainly flying the flag for British Asians in gaming, he also gave out tips to help anyone thinking of creating their own YouTube videos:

“Do something you’re comfortable with doing, enjoy it. Over time eventually you will build up an audience of some level, so just make the most of it and enjoy.”

He then gave an insight into The Sidemen’s future plans: “We’re going to be working on more group videos in the future and we’re looking to bring in bigger production, to take our content to the next level.”

Visitors at the event could also buy a plethora of iconic gaming merchandise and memorabilia such as foam replicas of Minecraft swords, clothing from KSI’s Beast range, posters with well known gaming and movie characters and much more.

DESIblitz caught up with some British Asian gamers to hear what they loved about the event and gaming. One gamer, Arij Zafar, commented on the open and friendly nature of the event: “You can play with loads of new people. I don’t know anyone here and I’m playing with them.”

He also told us what game he loves to play the most: “My favourite game is Minecraft. 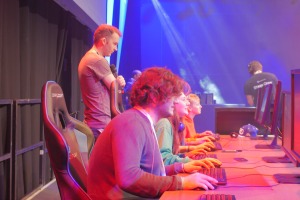 “I like it mainly because of the YouTubers who advertise it and they play lots of mini-games and I like the whole concept of the mini-games. There’s a huge variety of things you can do in Minecraft.”

Another fan of gaming, Aamir also shared his favourite game and gaming machine of choice:

Aamir also let us know what type of game he would like to develop, if given the chance:

“If I was to create the next big game, I’d make it old school, make it tougher, make it less rewarding for newer players.”

While the festival had a relaxed vibe, there was also a competitive element with various tournaments for people to take part in such as FIFA, Call Of Duty, League of Legends and Dota 2. 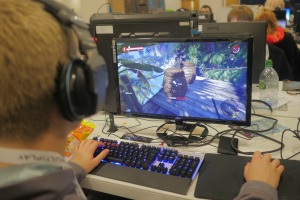 The event played host to well known games and developers, however there was also a place for independent games at the indie zone.

Two games from this section were Domino Effect, a FPS style game and Pixel Rift, a game made for the virtual reality headset, Oculus Rift.

The game, which requires an NES controller, sees the player go back in time to play a teenage girl who wants to play on her Gameboy in school.

Insomnia 53 had a lot to offer and left plenty of food for thought at what 2015 can bring into the gaming industry.

Insomnia continues to be an integral part to everyone involved in gaming and serves as a platform for everyone connected to the industry to come together and learn from each other while having fun meeting new people and playing great games.

We can’t wait for the next Insomnia festival, i54, which will certainly be another unforgettable and unmissable event!

Amarjit is a 1st class English Language graduate who enjoys gaming, football, travelling and flexing his creative muscles writing comedy sketches and scripts. His motto is “It’s never too late to be who you might have been” by George Eliot.
1 in 6 Smartphones vulnerable to Cyber Attacks
What is Black Friday?