EA Sports and Konami have continued their battle for supremacy with the release of FIFA 14 and Pro Evolution Soccer (PES) 14. Both on sale, it is up to football fans and gaming fanatics to decide which one will rule.

"We always welcome competition from our good friends at Konami; it keeps us all on our toes."

The summer transfer saga has finished. The football season has started, and just when we thought it was safe to leave the house, the single most important debate of the gaming year has unfolded.

In the ever-advancing gaming world, the question on everyone’s lips is FIFA 14 or Pro Evolution Soccer (PES) 14? The on going battle between the two footballing giants has become the topic of conversation amongst the majority of gamers around the globe.

Every year EA Sports and Konami release new iterations of their FIFA and PES franchises simultaneously and let gamers decide on which they will choose.

Whether your preference is FIFA or PES, this never-ending debate will go on forever at work, on the school playground, in the gym and on Facebook. 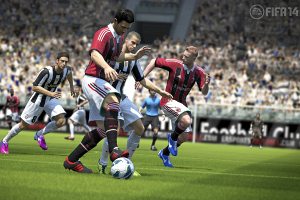 Konami’s title ‘Pro Evolution Soccer’ has enjoyed an advantage over EA’s ‘FIFA’ title for quite a while. With the Japanese gaming giants reigning supreme with ‘Pro Evolution Soccer 5,’ FIFA was nowhere but in their shadow. EA had no choice but to sit back and admire their rival’s ability.

Slowly though, FIFA hacked away in their studios improving the gameplay for the launch of FIFA 08, which showed much promise from their previous editions.

The shift began with the EA after the release of FIFA 09; this game had something essential, something for the first time in the series history that made it look and play like an actual football match.

Football fans fell in love with EA’s realism of the prestigious game and this swung the power over to FIFA, hence going on from strength to strength whilst PES have played catch up.

Peter Moore, CEO of EA admits: “We always welcome competition from our good friends at Konami; it keeps us all on our toes. Pro Evo has been a favourite game for a number of years but I think people recognise FIFA has been a powerful force and we’ve raised the quality of what soccer games are in the entertainment business.”

Reflecting upon current form and standings, FIFA have still not added India and Pakistan to international teams!

So let’s have a closer look at FIFA 14 and PES 14 and what they offer.

Precision Movement promises to allow us a little more freedom of movement, especially with the better players. This could set up the potential to leave defenders standing with movements.

Protect the Ball is an upgrade of the player impact engine. So when two players come together, rather than one of them just clumsily tripping over, there might be more of a battle.

The Global Scouting – In a move that will arguably show off the FIFA rights more than at any previous stage in the franchise history, you will now be able to send your scouts out to regions looking at specific types of players.

Konami has introduced a new game engine and the most comprehensive advance for the PES range since its inception.

TrueBall Tech, like FIFA’s Real Ball Physics, focuses on the movement of the ball and how it reacts to the player. The developers promise to give the player total control in determining how their body is angled to receive a pass. TrueBall Tech allows the ball to be chested or nodded past an opponent, flicked into space or to a team mate.

Motion Animation Stability System (M.A.S.S.) is the physical element of the game. The developers tell us that the outcomes of these physical battles will be far less pre-determined than in previous games. 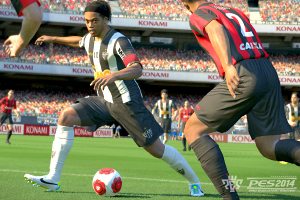 Heart is billed as being your eleventh man, so in a hostile away game some of your team may shrink a little, while they would be lifted in front of 50,000 home supporters. Players will also react to their teammates performances.

PES ID will double to around 100 players, enhancing the title’s visual perspective.

Team Play is the most exciting development in PES 2014. It allows CPU controlled players making better runs of their own accord to open up the game alongside a new ‘Combination Play System,’ which will enable you to set up a variety of different tactics across key areas of the pitch using three or more players.

The Core is probably best described as the underlying nucleus that makes PES what it is. The key features of this include, the graphical style, the cut scenes, the stadium design and the player animations. This year, with the new game engine, all that should get a boost along with set plays like corners and free kicks.

The developers of PES 14 said: “We can’t and shouldn’t be just using higher quality textures etc. [Next-generation PES] should be new. In the past, people accused us of being lazy.”

“We’re adamant of not making the same mistakes, and making sure we create amazing football games. It’s hardly amazing making the next-gen version prettier. We shouldn’t have that mentality, and you shouldn’t expect that. Aim higher.”

The big news is that PES 14 will not be launching on either of the next-generation consoles hence leaving the door open for FIFA 14 to have a free-reign. Whether this proves to be a big gamble only time will tell.

In the meantime, both games have been unleashed on the Xbox and PS3 and left to the gamers to decide on the single most important debate of the gaming year.

Sid is a passionate about Sports, Music and TV. He eats, lives and breathes football. He loves spending time with his family which include 3 boys. His motto is "Follow your heart and live the dream."
What and Where in New York City
Top Cities to visit in the UK