What is Black Friday?

With pepper sprayings, stabbings, and shootings, America’s craziest holiday is famous across the pond, but now it’s moving to the UK. So what is Black Friday and why will it make you want to spend your money?

"We are expecting record numbers to benefit from Black Friday Deals Week."

Brace yourselves. Sales are coming. Traditionally, Boxing Day has had a firm grip on the UK’s national, ‘spend your money on sales’ days.

In fact, it’s arguably run unopposed as a singular sales event, and could be considered a holiday in its own right.

However, our friends over the pond have enjoyed their own winter season sales sprees, that arguably eclipse the UK’s.

The day after Thanksgiving, or ‘Black Friday’ as it is now dubbed, is seen as the official start to the American Christmas spending season. Reports state that the holiday has been the busiest shopping day of the year since 2005.

Falling on the last Friday of November, the occasion is a landmark of American consumer culture. If the American Dream had a birthday, Black Friday would be it. The UK has long held out on adopting the American event – its recognition is arguably a very recent phenomenon. 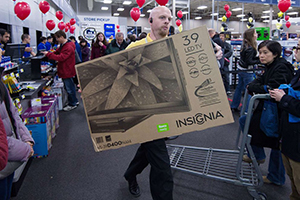 Some attribute the acceptance of Black Friday to online retailers, whose sales were exploitable by people outside of the UK anyway. In fact, online mega-retailer, Amazon, actually takes credit for the embracement.

Christopher North, managing director of Amazon.co.uk, says: “Black Friday took an incredible leap forward in 2013 with so many more customers taking advantage of the great deals on that day, resulting in sales of over 4m items for the very first time in our history.”

North isn’t wrong. When Asda got involved in 2013, Britain experienced one of its first real, Black Friday rushes, with chaotic scenes reminiscent of those in the States.

The discounts spawned reports of a supermarket melee, were one woman was hospitalised. Thirsty consumers flocked to take advantage of tablets cut to £49; for bargain 32-inch LCD TVs slashed to £99; and budget boosting Black & Decker drills at £39.

Just the thought of those deals has us parched. And now retailers are expecting this coming Black Friday on November 28th, 2014, to be even busier. 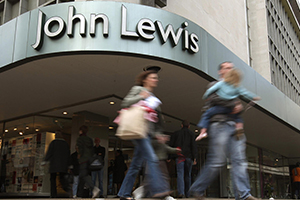 North adds: “This year, we are offering more deals and savings than ever before and we are expecting record numbers to benefit from Black Friday Deals Week.”

British police will hope the growing adoption of the event will not come as a special, 2 for 1 Black Friday deal, where States-style riots are bundled free.

In past years, shoppers in the States have experienced more than supermarket scuffles. 2008 saw a Walmart employee trampled to death when shoppers flooded into the store.

Jimmy Overby, co-worker of the deceased employee said: “He was bum-rushed by 200 people. They took the doors off the hinges. He was trampled and killed in front of me. They took me down too. I literally had to fight people off my back.” 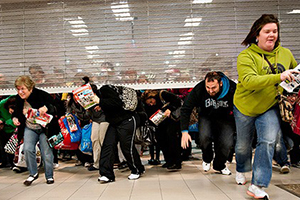 Pepper spray attacks, stabbings and shootings have also occurred on the holiday. As recently as 2013, a shopper was shot in the leg after attempting to wrestle a stolen, recently purchased TV away from a thief.

Data published by analytic website Silk, list Walmart as the most dangerous place to shop on Black Friday. 66 per cent of Black Friday injuries since 2006 have occurred at the retailer.

Psychologist, David Hodgson has attempted to understand the chaos that Black Friday has stirred in the past. In a conversation with IBTimes UK, he said:

“We get a buzz. It probably triggers reward centres in the brain, releases a tsunami of dopamine into the brain which is psychologically and neurologically very pleasurable and euphoric.”

“Everybody is looking at everybody else to find out why they’re aroused. If the majority of people are in a good mood then people say they are excited and enjoying it, if one or two people become angry they say ‘I must be angry’. It’s that kind of thing on a subconscious level. One or two agitators can lead to a trail of explosions through the crowd.”

Despite the chaos and excitement that surrounds the price-cuts, the sales are arguably rather lackluster. Some cite the effectiveness of a powerful PR wheel, spinning furiously to generate interest, when in fact, ShopAdvisor found average Black Friday discounts in 2013 were less than 5 per cent.

Interestingly, their research found that 42 per cent of products tracked by the website were actually more costly on Black Friday, than in the four weeks leading up to it. The money saving site found that deals in 2013 actually peaked on 18th December, at 17.5 per cent.

In any case, as Britain continues to adopt the extreme consumer cultures exuding from the States, Black Friday in the UK is pretty much official. How long will it be before its not only Turkey-time on Christmas day?

Zak is an English Language and Journalism graduate with a passion for writing. He is an avid gamer, football fan and music critic. His life motto is “Out of many, one people.”
Highlights of Insomnia 53 Gaming Festival 2014
UK ISPs to block more Piracy Sites