Hepatitis C is a blood-borne virus and a campaign to raise its awareness amongst ethnic communities uses a large scroll signed by ethnic media and entertainment celebrities.

'the more you know the better'

A special scroll launched to raise the awareness of Hepatitis C amongst ethnic communities is part of the national NHS campaign to encourage the public to be more aware of the threat of the infection.

The scroll was launched in 2009 with support from many ethnic celebrities, media people and public to raise awareness of Hepatitis C. The scroll bears hand-prints and signatures showing their solidarity for this unique UK campaign.

Hepatitis C is a blood-borne virus that can cause chronic infection and lead to serious liver damage. It is mainly spread by contact with the blood of someone who has the infection. Many people are unaware that they have hepatitis C, as symptoms often do not occur for many years. 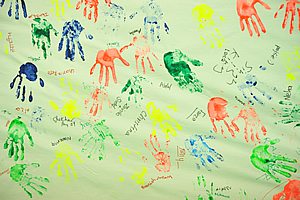 Emerging evidence suggests that people from South Asian communities in England are at increased risk of infection. If left untreated, it can lead to cirrhosis, liver cancer or liver failure. Although there is yet no vaccine for hepatitis C, there is treatment available which is effective for many patients. 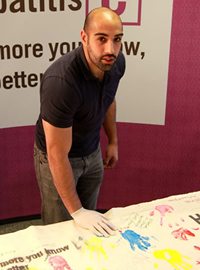 Mishal Hussein said, “I am delighted to add my hand-print to the scroll and help raise awareness about an important issue for the Asian community. Hopefully together we can help prevent the spread of Hepatitis C and encourage those at risk to get tested.”

Tajiv Masson said, “I didn’t know very much about Hepatitis C, but by supporting this campaign I have learnt a lot about the virus and that South Asians may also be at risk. I’m happy to do anything I can to lend my support to this very important campaign.”

The campaign targets ethnic minorities and bears the slogan, ‘the more you know the better’ which aims to encourage people to find out more about the infection.

People from the offices of ethnic media organisations across London, Birmingham and Manchester also added their hand-prints to the scroll in support of the cause. The aim of the visits to ethnic media offices is to provide journalists with an opportunity to find out more about Hepatitis C.

Members of the public added their hand-prints to the scroll at the Birmingham’s Eid and London’s Barking Melas in 2009.

There is a a dedicated NHS South Asian Hepatitis C website at www.nhs.uk/hepc/southasian where people can take a short on-line questionnaire to assess whether they’re at risk or not, or download a leaflet in languages including Urdu, Gujarati, Punjabi and Bengali.

The NHS also has a confidential and freephone Hepatitis C information line available for people who want to talk to someone in their own language on 0800 181 4774.

Filming and Photography by Vintage Creations for DESIblitz.com Copyright © 2010.

The Magic of Mascara
Diabetes Risk in British Asians