Diabetes is a high-risk disease closely linked with South Asians. In the UK, around 20-25% of Asian adults who are over the age of 50 years suffer from Type 2 diabetes. A major concern for all and more awareness is required.

Diet and exercise is the first step in treating Diabetes

There are 70,000 South Asians and black people in the UK with undetected diabetes. Diabetes occurs when the body cannot balance blood sugar levels due to insufficient insulin production. It can remain undiagnosed for 10 years, stealthily causing heart disease, strokes, eye and kidney damage.

Diabetes is one of the biggest health challenges in the UK. It is the fifth leading case of mortality. People from South Asian communities are 6 times more likely to develop Type 2 Diabetes than the white population. 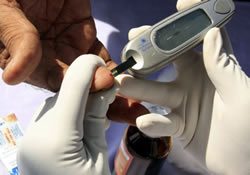 Type 1 Diabetes is caused by lack of insulin production. Type 2 Diabetes is a result of insulin not working properly. Chronically raised levels of blood sugar increases the production of free radicals which damage the body’s tissues and organs. Nerve tissues and blood vessels are particularly vulnerable to this damage.

Diabetes can cause blindness, kidney diseases and strokes. Together with hypertension it is a major causal factor in heart disease.

Diabetes causes thirst, tiredness and frequency of urination. Cuts and grazes take longer to heal. If blood sugars become dangerously high in uncontrolled diabetes sufferers can slip into a comma. Low blood sugars can cause faints and loss of consciousness. 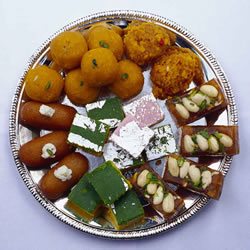 Asians generally lead unhealthy lifestyles. Indian vegetarian diets are more likely to cause sustained rises in blood sugars. Asian meals consist of a higher portion of refined carbohydrates which are more likely to turn into sugars. They are also low in vegetables and proteins. Asians are also more likely to gorge on traditional Indian sweets (mithai) which are very high in sugars.

When inhabitants of 47 different countries were analysed South Asians had the lowest intake of fruits and vegetables.

Diet and exercise is the first step in treating Diabetes. Patients are placed on a no sugar diet and advised to avoid refined carbohydrates. Specialist diabetic food such as diabetic biscuits and diabetic chocolates with low sugar content is available from chemists and supermarkets. It is better to avoid high sugar food altogether. Blood sugar control is vitally important in diabetes treatment. Diet is a good way to control blood sugars. 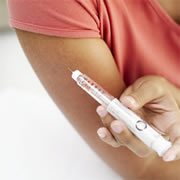 Type 1 Diabetes use insulin injections to control blood sugar levels. Type 2 diabetes use oral anti diabetic drugs. It is very important to stick to times given for taking drugs.

South Asian populations have high numbers of obese people. Asians carry most of their fat around their waist line forming the typical apple shaped figure. This abdominal fat predisposes people to develop diabetes.

A significant proportion of Asians are overweight, eating unhealthy high sugar diets and have low levels of physical activity. Exercise is not always high on the agenda for British Asians.

Asians are one of the least active groups in the UK. They are reluctant to take physical exercise. Asians questioned say they know they should be healthy but they are just not motivated to change. Fast food and high sugar snacks are easily available from any Indian take away.

Diabetes UK has produced a DVD short film, Meethi Baatein (Sweet Talk) aimed at Asians with Diabetes. The story is about Bobby, an average Asian man living his life in the UK. He celebrates his birthday by drinking and smoking too much. Bobby is overweight and unhealthy. His wife and best friend nag him about his health but Bobby is unconcerned. Watch the trailer below to find out what happens in Bobby’s life.

So, does Bobby start thinking about his unhealthy lifestyle? The full DVD is available from the diabetes UK website if you want to find out more.

Around 1.4 million people are diagnosed with diabetes in the UK. About 50,000 of them are from the Asian community. It is better to cut down on sugars and follow a healthy diet, if you don’t want to become part of the statistics.

S Basu wants to explore the place of Indian diaspora in a globalised world in her journalism. She likes being a part of contemporary British Asian culture and celebrates the recent flourishing of interest in it. She has a passion for Bollywood, Art and all things Indian.
Hepatitis C Awareness Campaign
Ten Foods that burn Fat