Netherlands qualified for the knockouts as Group winners after beating Chile 2-0. In Group H, Belgium edged a 1-0 win over the Russians. Algeria defeated South Korea 4-2 in Porto Alegre. France trounced Switzerland 5-2 in Salvador. England are out of the 2014 FIFA World Cup.

“Some people drink, some are addicted to tea or cinema. My addiction is football."

Netherlands finished top of Group B after Leroy Fer and Memphis Depay scored in a 2-0 win against Chile.

Divock Origi scored an 88th minute goal as Belgium beat Russua 1-0 to qualify for the last 16.

Algeria stayed in contention for a place in the round 16 after a 4-2 win against South Korea. France confirmed their place in the last 16 with a 5-2 thrashing of Switzerland.

Costa Rica shocked Italy 1-0 to reach the last 16 as they knocked England out of the 2014 FIFA World Cup.

France beat Switzerland in a largely one sided affair. They clinched their 2nd win of the group stages, thanks to a dominant team effort with five goals from five different players.

Arsenal’s Olivier Giroud got the ball running for France with a 17th minute header. Blaise Matuidi doubled the lead a minute later. France had the luxury of missing a Karim Benzema penalty as Mathieu Valbuena made it 3-0 just before half-time.

Benzema struck half way through the second half to make it 4-0, before Moussa Sissoko scored in the 73rd minute, turning the game into a real Brazilian carnival for the French.

Switzerland pulled one back with nine minutes to go through Blerim Dzemaili. And with three minutes left, Granit Xhaka scored a second swiss goal as France won the match by a margin of three.

This fixture was a potential classic as a win for Belgium would confirm their place in the last 16. Russia needed to improve on their draw with South Korea.

A somewhat cagey and dour encounter was served up in the first half as both teams failed to take any advantage. Almost happy to play for the point, the first half ended goalless.

Substitutions by both teams in the second half added more bite. The Belgians piled on the pressure and were rewarded in the 88th minute when substitute Divock Origi converted an Eden Hazard cross to hammer a winner into the roof of the net.

With six points, Belgium went through to the last 16. Russia remained on one point, leaving the group wide open. Bollywood legend Amitabh Bachchan was clearly entertained, as he tweeted:

“Okaay … spoke to soon ! Belgium scores through sub ! Methinks they have a strategy .. hold on till the very end and then .. wham.”

Not much motivation was needed for the South Koreans to stay in the hunt. An entertaining encounter saw Algeria finally “arrive” at their World Cup, after a history of inept performances during previous tournaments.

Having not scored a World Cup finals goal for twenty-eight years, Algeria started well as they went 3-0 up in 38 minutes with goals from Islam Slimani, Rafick, Halliche and Abdelmoumene Djabou.

Although the Algerians led at half-time, the match was not over. It was ‘game on’ five minutes into the second half when an effort from Song Heung-min returned a goal for South Korea.

Yacine Brahimi made it safe just after the hour mark to give Algeria a 4-1 lead. Koo Ja-cheol’s 2nd goal for the Koreans proved to be consolatory.

Post match, and Elated Algerian Coach, Vahid Halilhodzic proudly said: “I think that this was a real feat this afternoon and I would like to congratulate my players.”

The Netherlands ended the group stages with a 2-0 win over Chile as they topping Group B. Although both teams had already qualified, there was still much to play for with top spot at stake.

The emotionally charged match did not initially live up to expectations, but sparked into life in the second half with both teams pressing and creating goal bound efforts.

Leroy Fer finally broke the deadlock for the Dutch in the 77th minute. Memphis Depay then scored in the final minute to round off a 2-0 win for Netherlands.

On 20 June 2014, Costa Rica stunned Italy 1-0 in Recife as the minnows surprisingly qualified for the last 16. Costa Rica’s win meant England were now eliminated from the World Cup with one game to play. In Group E, Ecuador came from behind to beat Honduras 2-1 in Curitiba. 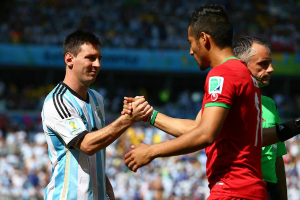 Miroslav Klose equalled Ronaldo’s record of fifteen World Cup goals as Germany and Ghana played out a thrilling 2-2 draw on Sunday 22 June 2014. Silvestre Varela scored in the 95th minute to keep Portugal in the World Cup, with a 2-2 riveting draw against USA.

Meanwhile, India’s proud representation at the World Cup took the form of an elderly couple from Calcutta, attending their 9th World Cup. Mr and Mrs Chatterjee fell in love with the beautiful game ever since they travelled to the 1982 Spain World Cup. Mr Chatterjee said:

“Some people drink, some are addicted to tea or cinema. My addiction is football.”

It just goes to show that it is never too late to travel across the world and watch one of the biggest global sporting events on the planet.