Faryal Makhdoom announced that series two of ‘Meet the Khans’ will air soon. But some people trolled her for “over-editing” her picture.

"So so so artificial. It’s scary."

Faryal Makhdoom has teased the second series of Meet the Khans will be on television soon but she was subjected to trolling.

The wife of boxer Amir Khan teased her Facebook followers that the reality show is set to air soon.

Posting a picture of her and Amir, Faryal said:

The reality series showcases the glamourous couple and their family at their home in Bolton.

The first series of Meet the Khans aired in 2021 and had six million requests on BBC iPlayer.

Audiences were given an insight into their adventures around the world as well as the realities of juggling parenthood, business and their marriage.

Another 10 episodes, which will be 30 minutes each, are set to air on BBC Three.

The channel has not revealed when it will air but Faryal’s post indicates that it will be soon.

The second series will explore Amir and Faryal’s wider sphere and the audience will be introduced to more of the couple’s family and friends as Amir thinks about his boxing future, Faryal celebrates a milestone birthday and launches a new enterprise.

The couple previously said: “We’re excited about the new series – you’ll have to wait and see what’s next for us!” 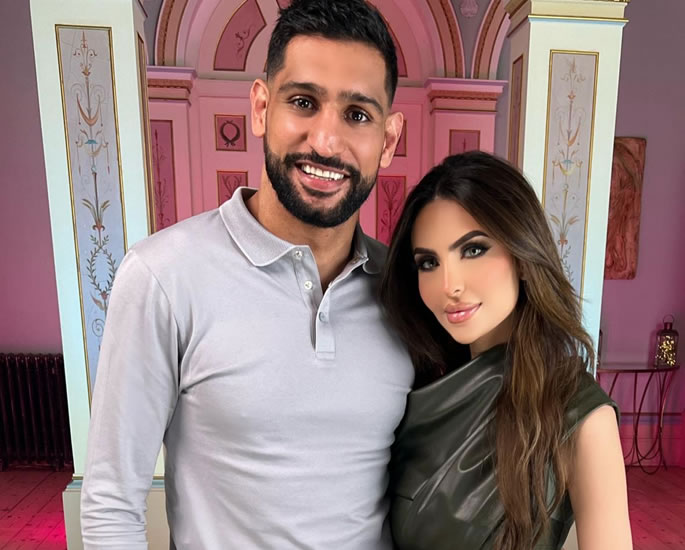 “We’re really excited that we have the Khans back for more.

“Meet the Khans really brought something new to the channel and series one was really popular with the audience.

“Faryal and Amir are both stars in their own right and we’re really glad that they are opening up their doors to us for more.”

News the show could be on TV soon delighted fans.

One said: “I’m excited. I really enjoyed the first season!”

Another wrote: “Shall enjoy watching that, would love to see more of their mums too and the kids.”

However, some people trolled Faryal Makhdoom over her picture, with some criticising her for over-editing her appearance in the picture.

“Why over-edit your face like this? Surely ALL of this is not needed.”

Another said: “You should not use filters after spending so many dollars on your face surgeries. Next time. Keep that in mind.”

One social media user wrote: “You look like a robot. So so so artificial. It’s scary. You legit had a beautiful face.”

Others trolled Amir, with one writing:

“Great seeing Amir up and off the canvas.”

Another person said: “Khan is only able to do acting now. Thanks for making him a TikTok sawft guy.”

Dhiren is a journalism graduate with a passion for gaming, watching films and sports. He also enjoys cooking from time to time. His motto is to “Live life one day at a time.”
Growing up as a British Indian-Pakistani Woman
Teenage Rapper stabbed Gang Rival at Shopping Centre