A #MeToo tweet by ‘Aishwarya Rai’ which highlights her abusive relationship with Salman Khan has gone viral despite it being fake.

As the #MeToo movement in India gains real momentum, a fake tweet said to have come from Aishwarya Rai Bachan’s ‘Twitter account’ highlights the toxic relationship she had with Salman Khan.

Many Indian women are coming forward on social media and revealing their #MeToo experiences in Bollywood since the revelations by Tanushree Dutta against Nana Patekar. But this tweet has come from an account which has been created by someone other than Aishwarya herself.

The fake tweet has gone viral and cites the abusive relationship Aishwarya had with Salman Khan in the past saying:

“Yes I was abused, beaten and many times threatened in my previous toxic relationship. Bollywood’s biggest charity man who calls himself ‘human’ is not so human after all” 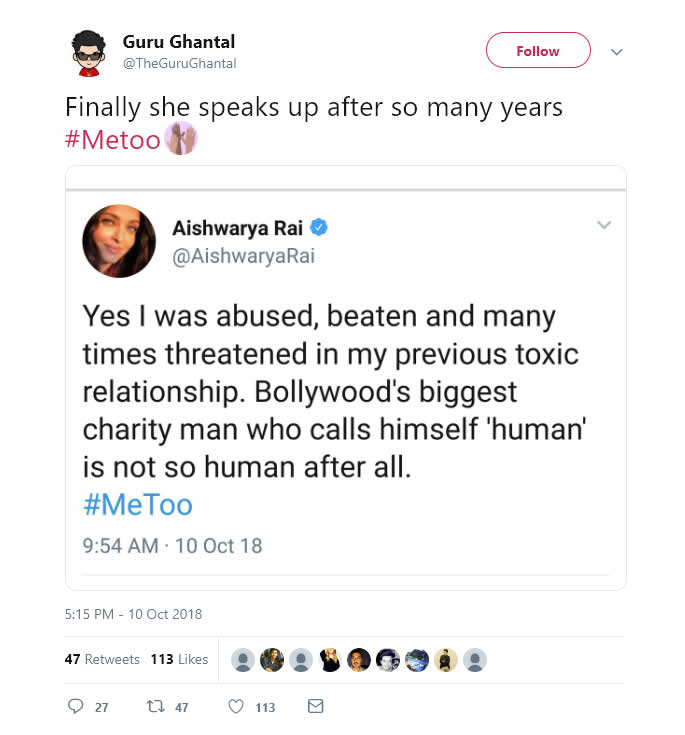 What is convincing is the Twitter handle with the ID @AishwaryaRai has a blue tick mark against it, which is a verification of the account.

When Aishwarya Rai broke up with Salman Khan in 2002, she did speak up about it. Saying how she did receive verbal, physical and emotional abuse from Salman. She also accused him of infidelity and indignity.

Aishwarya was quoted by the Times of India at the time as saying:

“After we broke up, he would call me and talk rubbish.

“He also suspected me of having affairs with my co-stars. I was linked up with everyone, from Abishekh Bachchan to Shah Rukh Khan.

“There were times when Salman got physical with me, luckily without leaving any marks. And I would go to work as if nothing had happened.”

Salman denied ever beating her. But it was clear at the time, Aishwarya was the recipient of abuse from him in their relationship with many other stories reported.

Although Aishwarya has not said anything of this relationship in the surge of #MeToo stories coming out in India regarding sexual harassment and abusive treatment by actors, directors and producers, she did comment generally on October 9, 2018, saying:

“I have spoken and will continue to when it comes to speaking for women…ever since I have got the microphone in my hand, right from the platform of Miss World (pageant).

“Since the world is becoming a smaller space where social media is bringing people closer and anyone from any part of the world can share their story and find interested people to listen to them.”

Although according to Twitter’s policy it does allow parody, newsfeed, commentary, and fan accounts, the edited image on this account does seem sinister with the clear attempt to bring Salman Khan into the fold of #MeToo and his behaviour towards Aishwarya.

Guru Ghantal also tweeted a second tweet, this time featuring SRK’s handle and his ‘reaction’ to the #MeeToo allegations against director Sajid Khan, brother of director Farah Khan with whom he has worked: 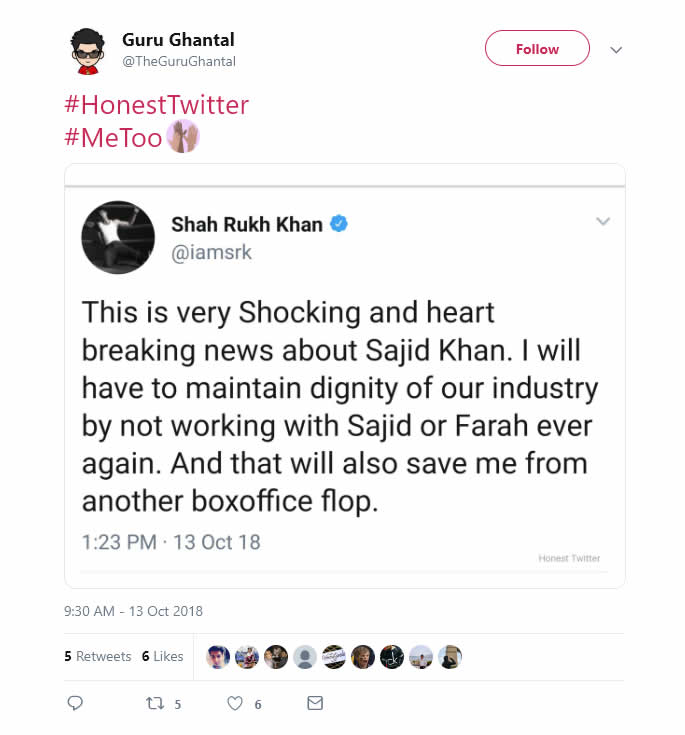 So, the question arises, is the user Guru Ghantal behind these fake tweets or is it someone else?

Either way, such fake social media messages are damaging to the real #MeToo experiences from those who are telling the truth.

Nazhat is an ambitious 'Desi' woman with interests in news and lifestyle. As a writer with a determined journalistic flair, she firmly believes in the motto "an investment in knowledge pays the best interest," by Benjamin Franklin.
Sapna Bhavnani attacks Amitabh Bachchan with #MeToo Warning
Saif Ali Khan joins #MeToo after being Harassed 25 years Ago