Vivek Oberoi has come under fire from Twitterati after he tweeted a meme featuring the personal affairs of Aishwarya Rai Bachchan as an election joke.

Bollywood stars can sometimes go to any length to get publicity for their favoured party. Vivek Oberoi did just that by retweeted a meme digging up the personal past of Aishwarya Rai Bachchan.

While the nation is stuck to its televisions screens awaiting the results of the Lok Sabha Elections 2019, many netizens are not impressed with Vivek’s tasteless joke.

Using the election as a backdrop and a comparison between poll results, Oberoi used a meme produced by another Twitter user whom he credits as @pavansingh1985.

The meme collages the affairs Aishwarya had with the three men. 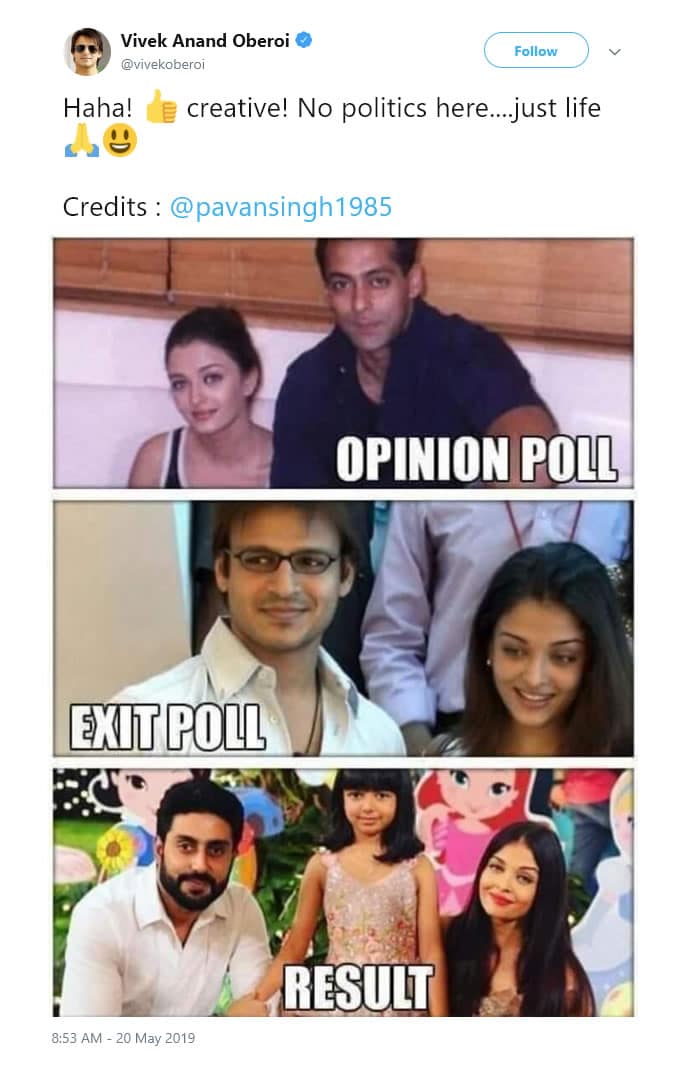 First, Salman and Aishwarya’s relationship which made headlines in 2000 and ended in 2002.

Secondly, when Aishwarya dated Oberoi which she never admitted publicly but broke ties with him after Oberoi at a press conference accused a drunk Salman calling him 41 times with threats to kill him.

Thirdly, in 2007 when Aishwarya married Abhishek Bachchan and had their daughter Aaradhya.

Reactions to the tweet were not supportive by any means, to his crass use of personal relationships for the purpose of election propaganda.

A lot of users of Twitter had their say on the use of the meme by Oberoi and why he should not have retweeted the image disrespecting Aishwarya Rai Bachchan.

“Vivek Oberoi must have got carried away & shared a meme which was distasteful. There are no two ways about it. But what stands out from this episode is Bollywood’s quick response. People like Sonam kapoor never utter a word regarding Salman’s misdeeds. #VivekOberoi #SalmanKhan”

“#VivekOberoi is trending!This is sick!Is he happy now 4 dragging others!a Low life cant respect women,kid&personal life+ His caption is worse!!Aish wont allow ppl to tweet meme about her she doesnt ecourage this!RT meme on ur own life but delete this &apologize. Jitesh then him”

“can’nt you understand that She is someone’s wife, mother & daughter. #vivekoberoi”

“I thought the same at first( just a silly meme) but was quite surprised that he would retweet it, which am sure it never occurs to #VivekOberoi at the time how harmful it would be for him. He should correct his action now.”

This is a mere sample of how many negative reactions he has received for tweeting the image.

Bollywood actress Sonam Kapoor was not impressed by his tweet either, calling it “Disgusting and classless”.

Vivek plays PM Modi in a biopic and some people say this is a publicity stunt by the actor for the film.

But the majority of people do not find this funny or clever at all. As to whether he deletes the “tasteless” tweet remains to seen.